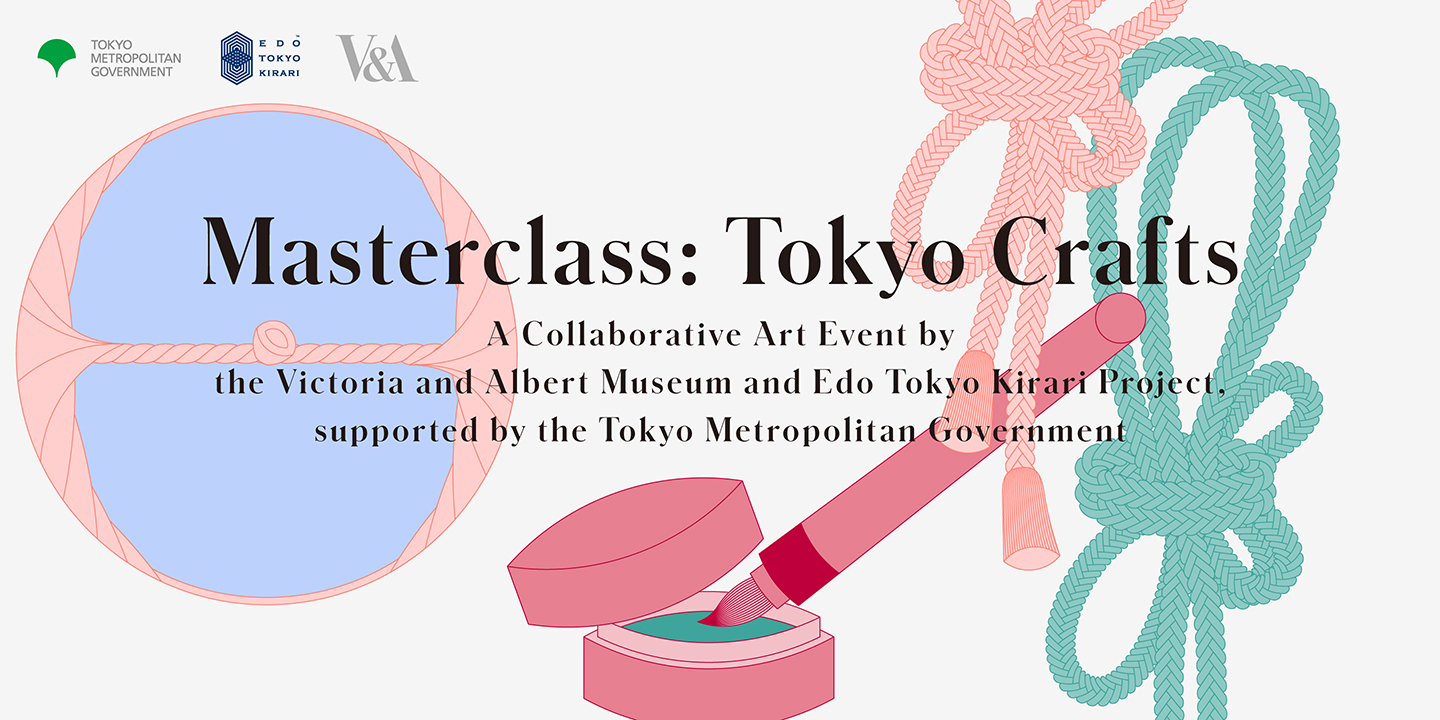 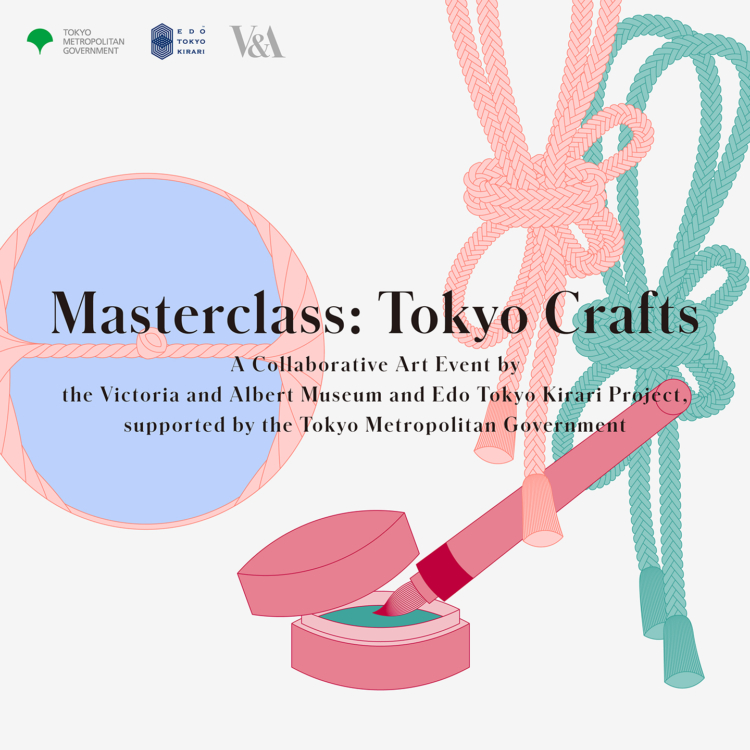 The Masterclass: Tokyo Crafts art event consisted of two portions: lectures and workshops. Participants in the event experienced the allure of the “Tokyo treasures” of the Edo Tokyo Kirari Project and the traditional techniques of its model craftspeople over the course of the day.

In this third report, I’d like to introduce the demonstration I conducted and the workshops held by the other model craftsmen in the event.

Demonstration
“Demonstration of Beni (Safflower) Rouge Dyeing of Heel-less Shoes” – by contemporary artist Noritaka Tatehana
I demonstrated dyeing using dye made from a type of safflower called “namabeni” from Isehan-Honten. Participants watched as the red dye, soaked into leather, turned iridescent the moment it was applied. 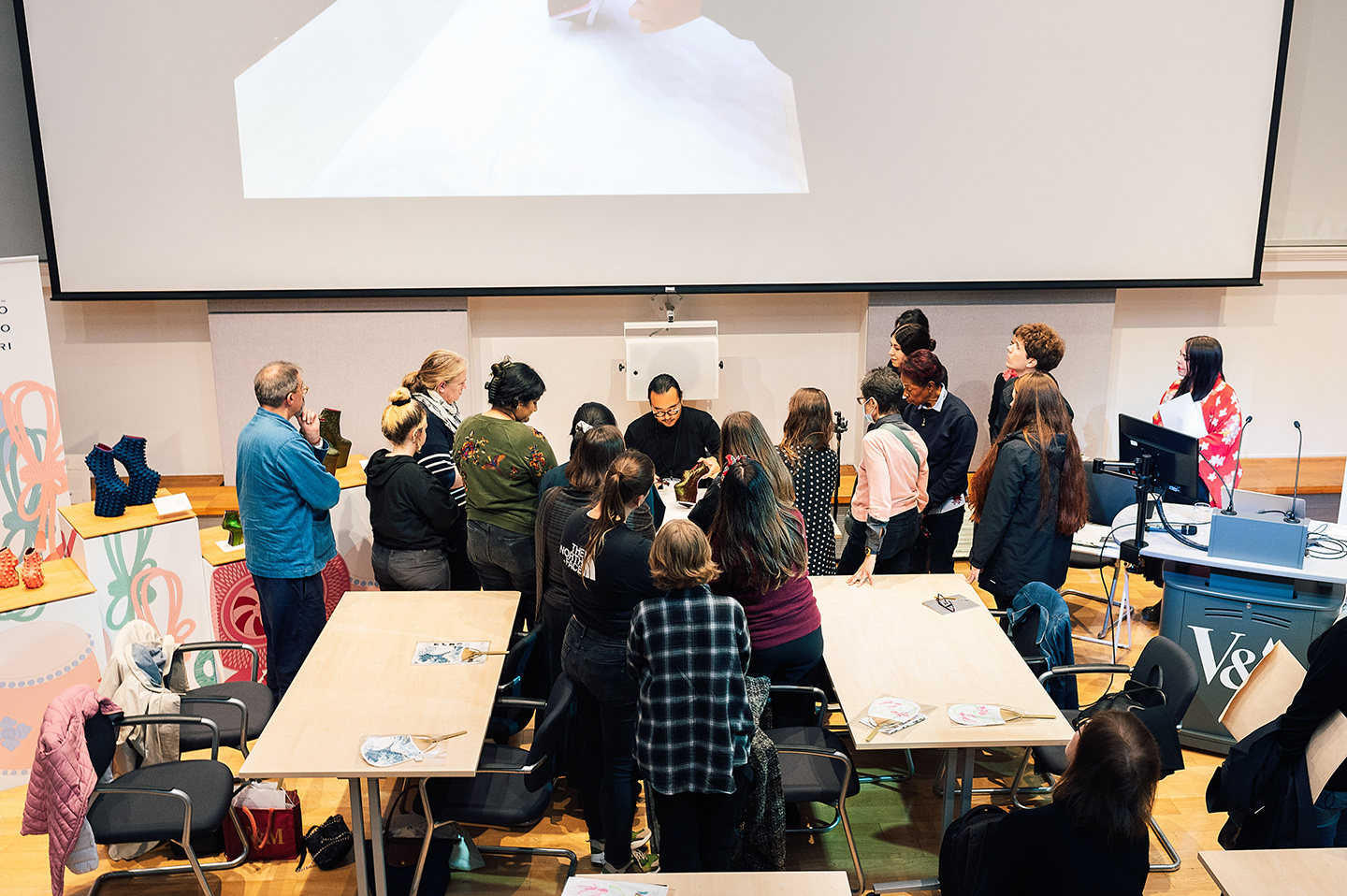 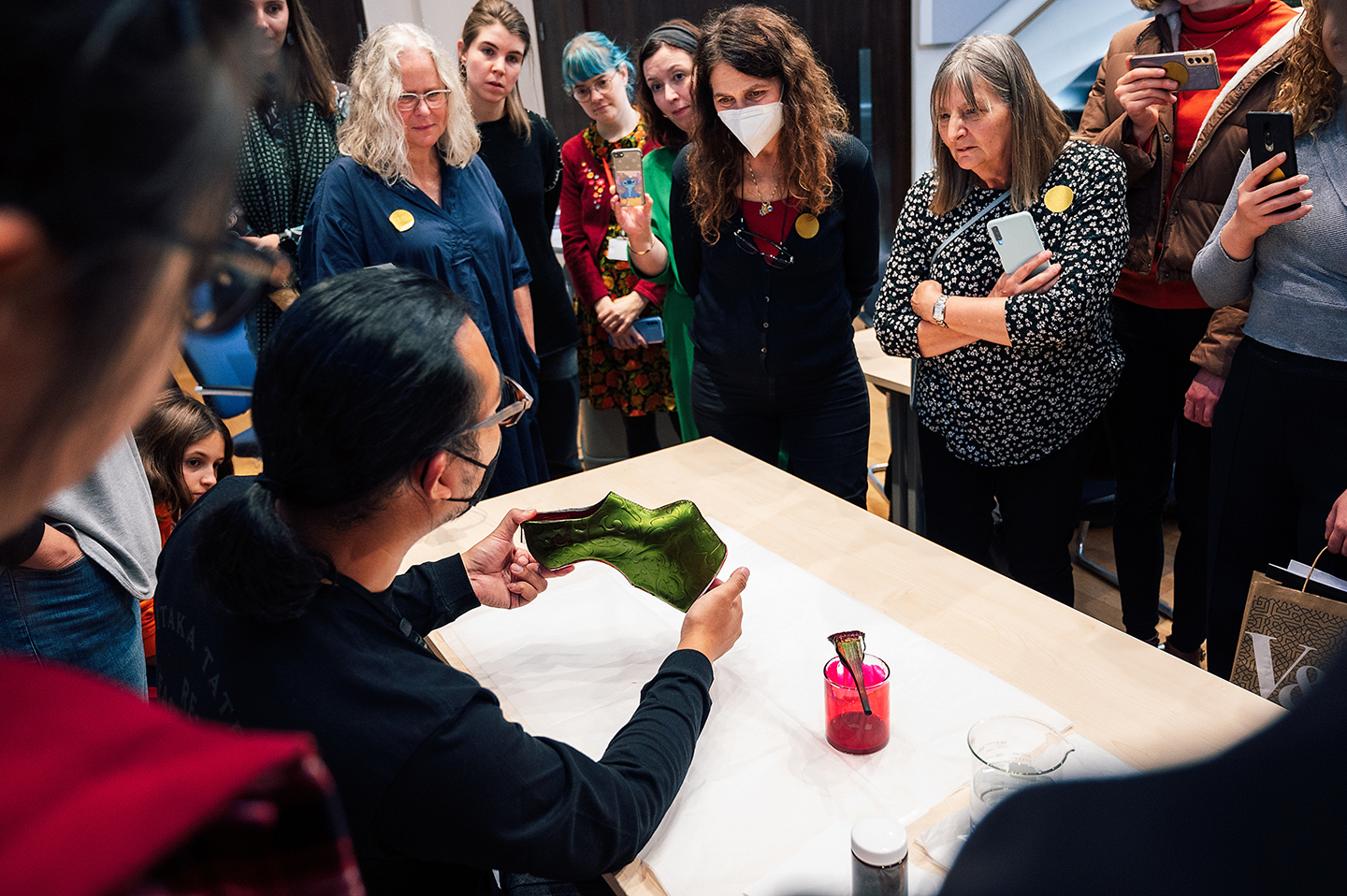 There was a murmur of excitement among those in attendance as the color began changing immediately.
As the photograph shows, the dye in the glass beaker appeared red, but the colors of the dyed shoes changed, becoming iridescent.

Workshop
“Create Brush-painted Charms with Beni (Safflower) Rouge” – Led by Komachi-Beni Isehan Honten
First, Miki Shimada of Isehan-Honten gave a lecture on how rouge is created using special techniques and the meanings of the color red, which is used in rites of passage such as childbirth, shichi-go-san (the “seven-five-three” celebration”), and weddings. The workshop began immediately after the lecture. 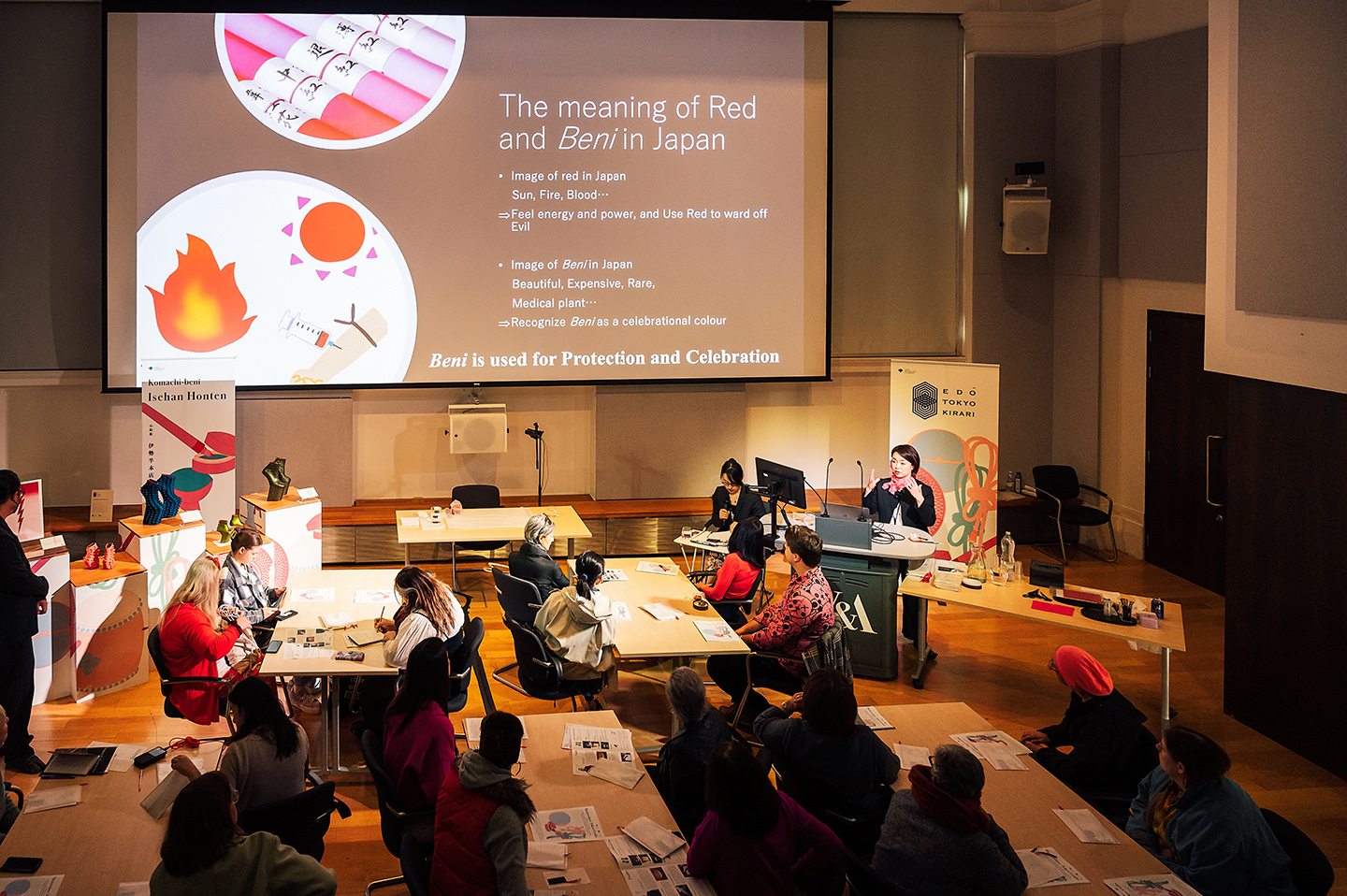 Participants used brushes to paint their own names or other words on black paper using iridescent rouge from Isehan-Honten. Each participant then wrapped this in paper to create their own charm. 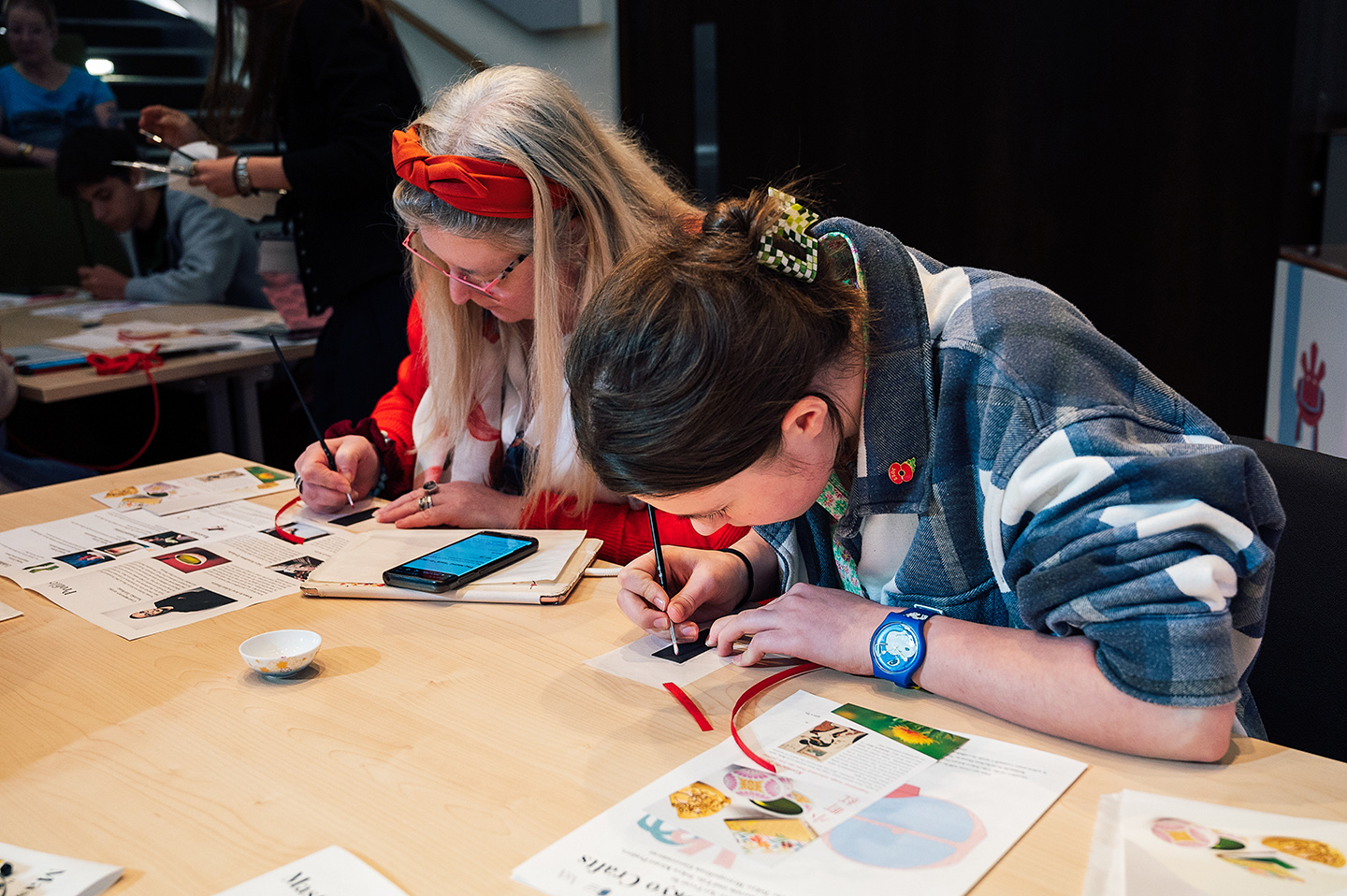 “Instead of simply telling people that the red rouge becomes iridescent,” explained Shimada, “I had them experience it in person, which I believe provided them with a deeper understanding of the phenomenon. Isehan-Honten has carried on the tradition of creating this wondrous type of rouge for almost two centuries, and I hope that participants found it interesting to learn about this traditional Edo-Tokyo industry and the craftsmanship that goes into it.” 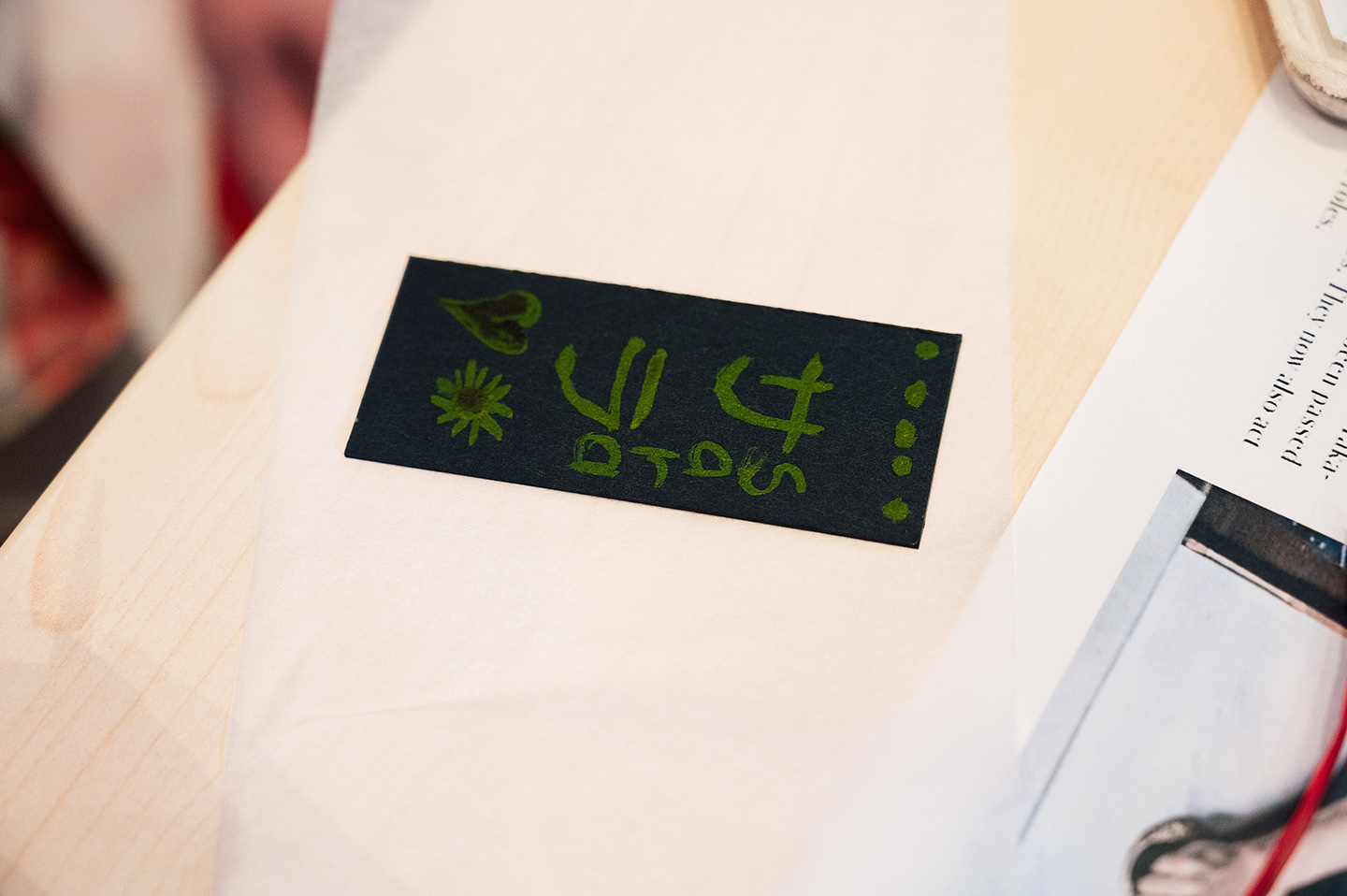 “Many of the people taking the workshop were interested in Japan, and some even used their phones to look up how to write their names in katakana.” (Miki Shimada) 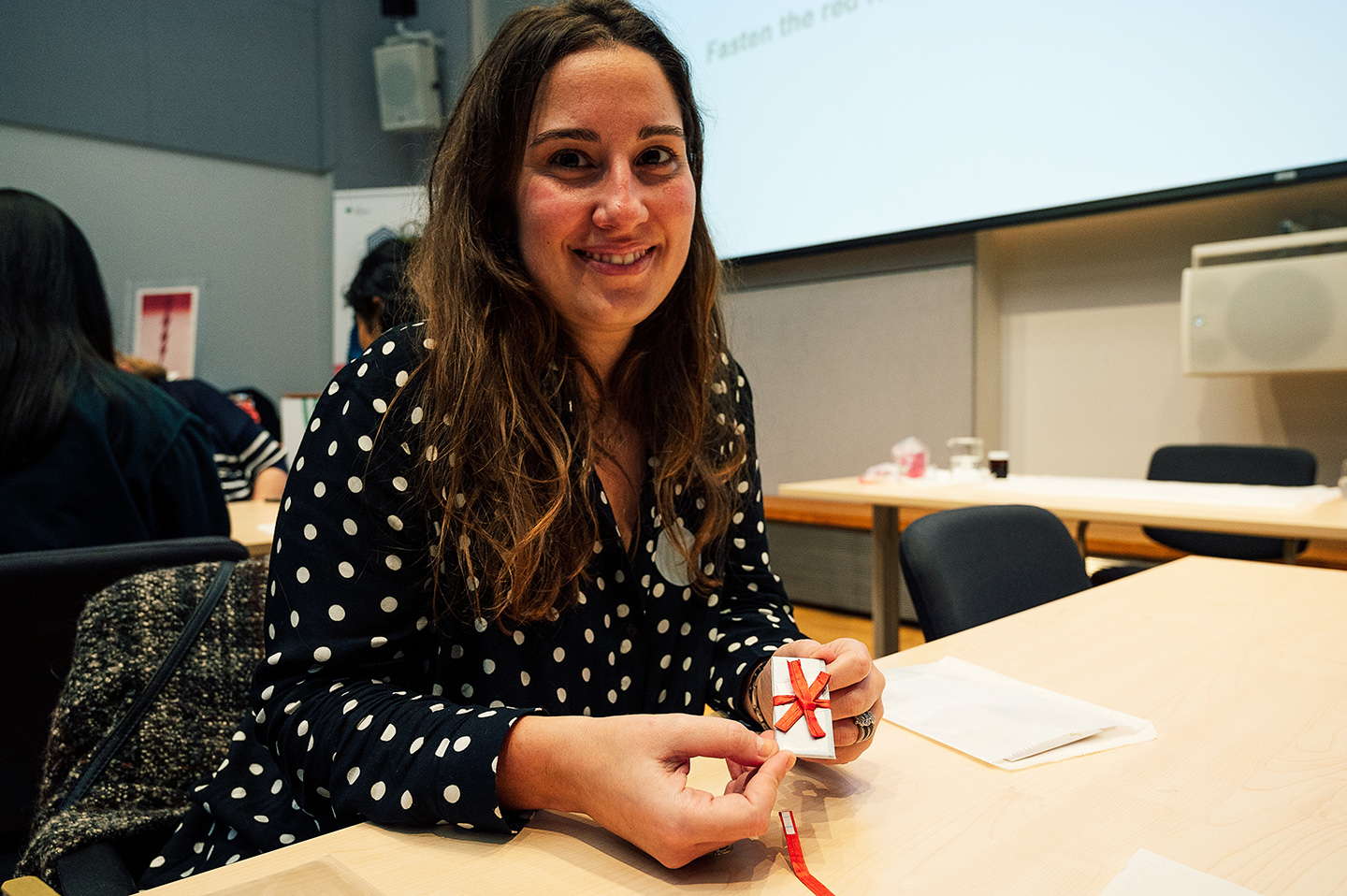 “The Victoria and Albert Museum is currently hosting a special exhibition titled ‘Beguiling Beni: Safflower Red in Japanese Fashion.’ Isehan-Honten will celebrate its 200th anniversary in three years, so we also hope to further share Japan’s traditions and the crafting techniques of Tokyo with the rest of the world.” (Miki Shimada)

Workshop
“Create Kumihimo Using a Round Platform and by Braiding It with Your Fingers” – Led by Tokyo Kumihimo Ryukobo
Participants experienced performing Kumihimo (Japanese silk braiding) by braiding with their fingers, said to be the original form of Kumihimo. By accurately interleaving cords draped over the fingers of each hand, participants were able to create patterns in their completed Kumihimo pieces. A master craftsman also led participants in the process of making Kumihimo using a round braiding stand, a distinctive feature of Edo-Tokyo Kumihimo. The sight of the participants thoroughly engrossed in their Kumihimo work was quite a sight to see. 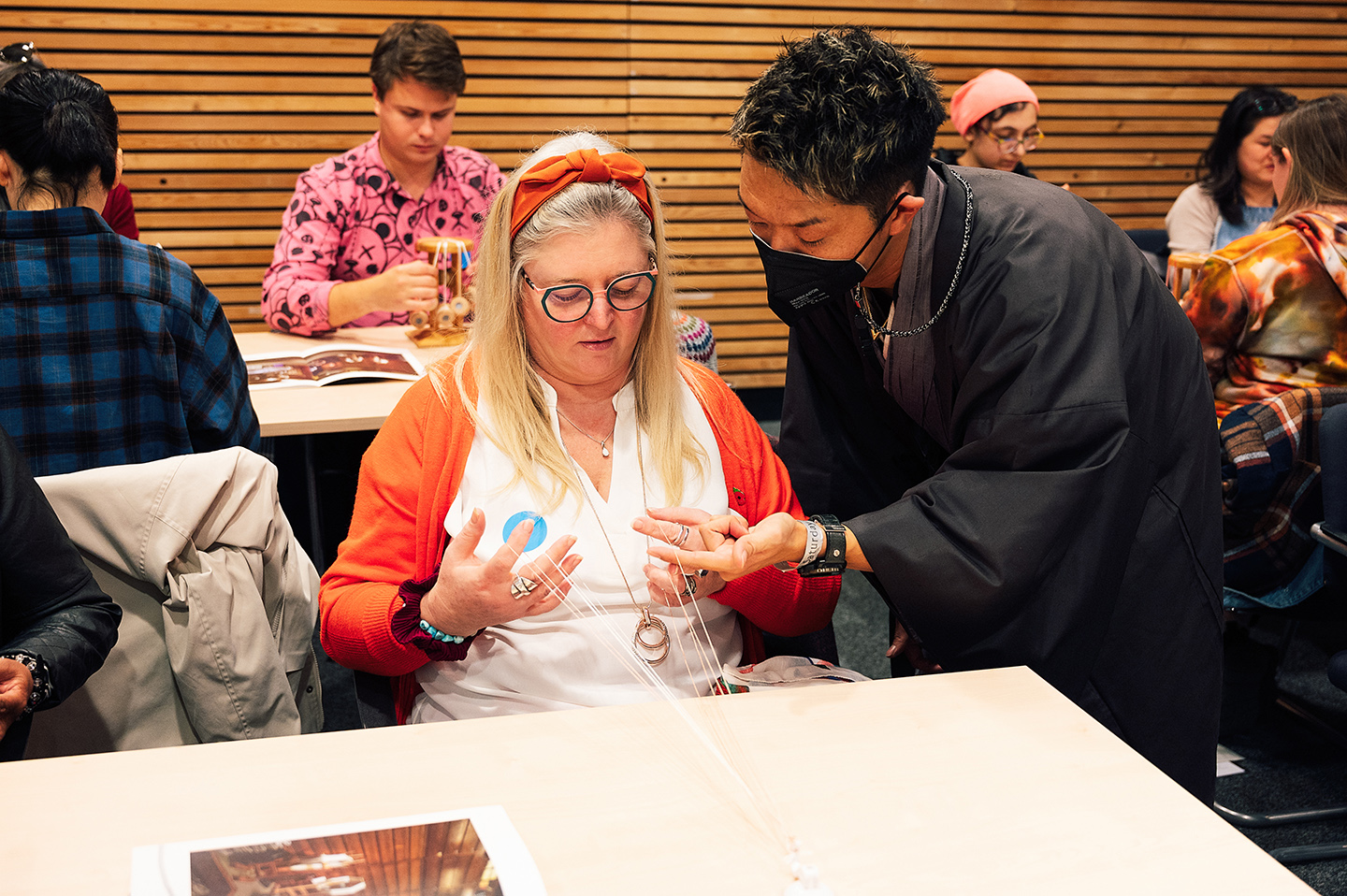 Ryuta Fukuda of Ryukobo, who lectured and also led a workshop, reflected on the event, saying “The Japanese gallery of the Victoria and Albert Museum has Japanese armor bound using Kumihimo, and Kumihimo also makes an appearance in an anime film that was also quite popular in the UK, so many of the participants in the event were already familiar with Kumihimo. In my lecture, I explained how Kumihimo differed from rope and how the front and back of Kumihimo express different aesthetics, through which I tried to give a sense of the sophistication shared by other Edo crafts.” 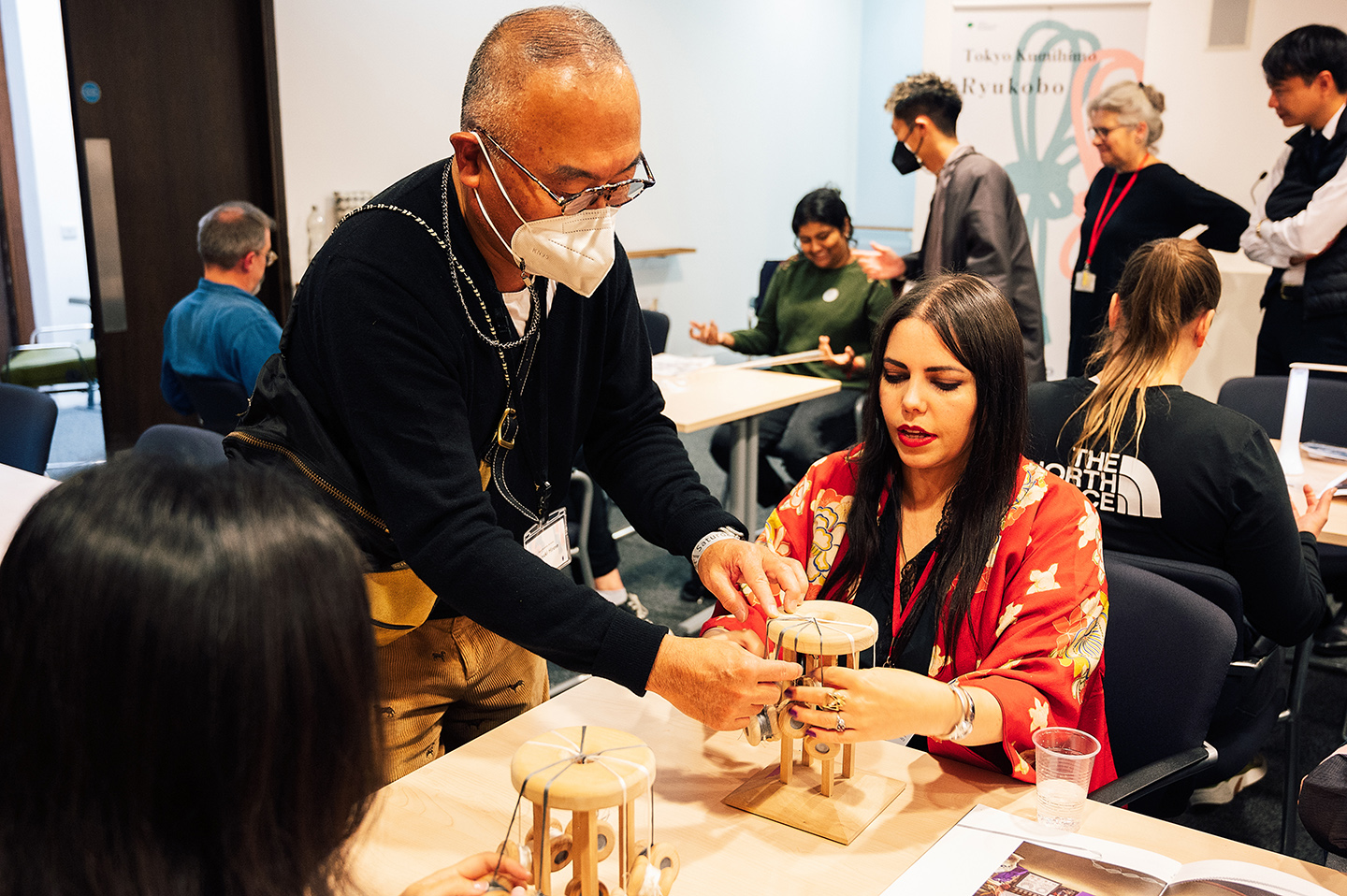 “Using the round braiding stand to create Kumihimo was difficult for the participants, who had never tried it before, but some of the participants developed their own braiding techniques, creating wholly original Kumihimo.” (Ryuta Fukuda) 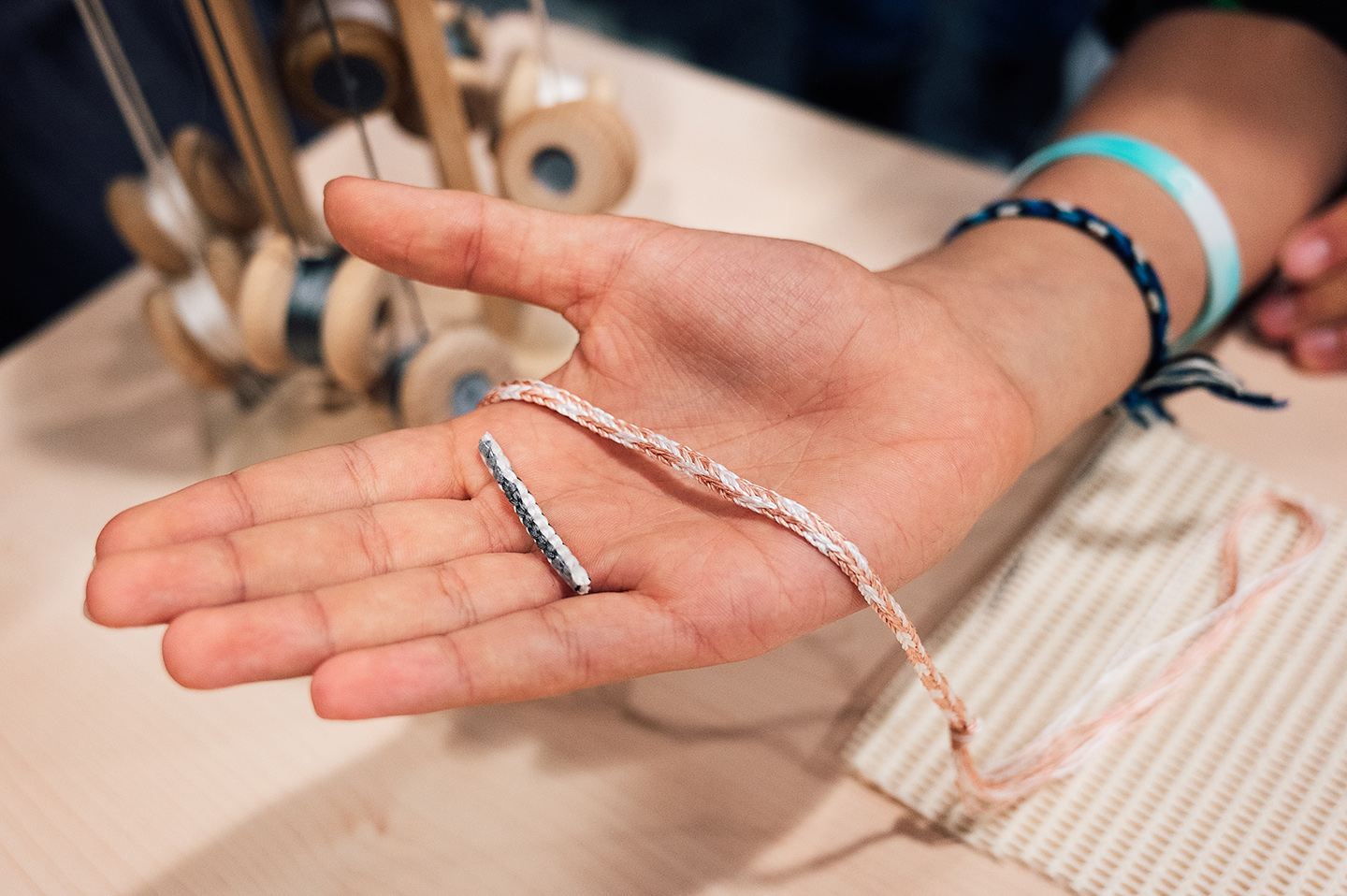 “Art and history museums around the world are home to many grand works of art, but Japan’s traditional industries and crafts tend more towards delicate handiwork. I led the workshop because I wanted to share the attention to detail and the warmth that goes into that handiwork.” (Ryuta Fukuda) 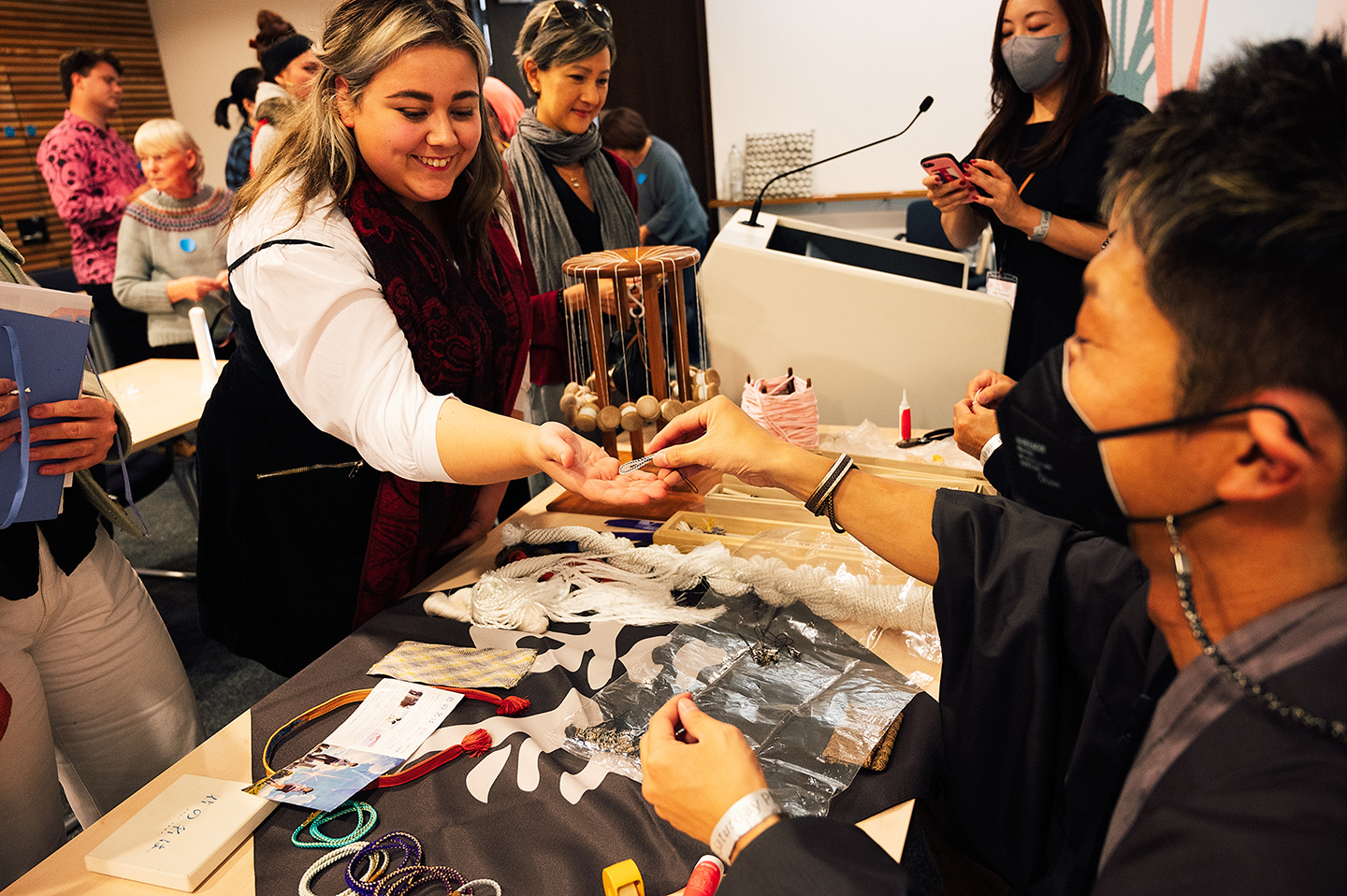 “One of the features of Kumihimo is that not only can it be used to create various patterns, but it can also be done using a variety of materials. I wanted to let the world know about its unlimited potential.” (Ryuta Fukuda)

Workshop
“Create Woodblock Prints” – Led by Edo woodblock print Takahashi Kobo
Participants experienced woodblock printing by printing Katsushika Hokusai’s The Great Wave off Kanagawa, part of the Thirty-six Views of Mount Fuji series, and a print of a goldfish, considered an auspicious print that wards off evil. There were gasps from participants as they separated the prints from the woodblock after creating it using a printing tool called a baren. 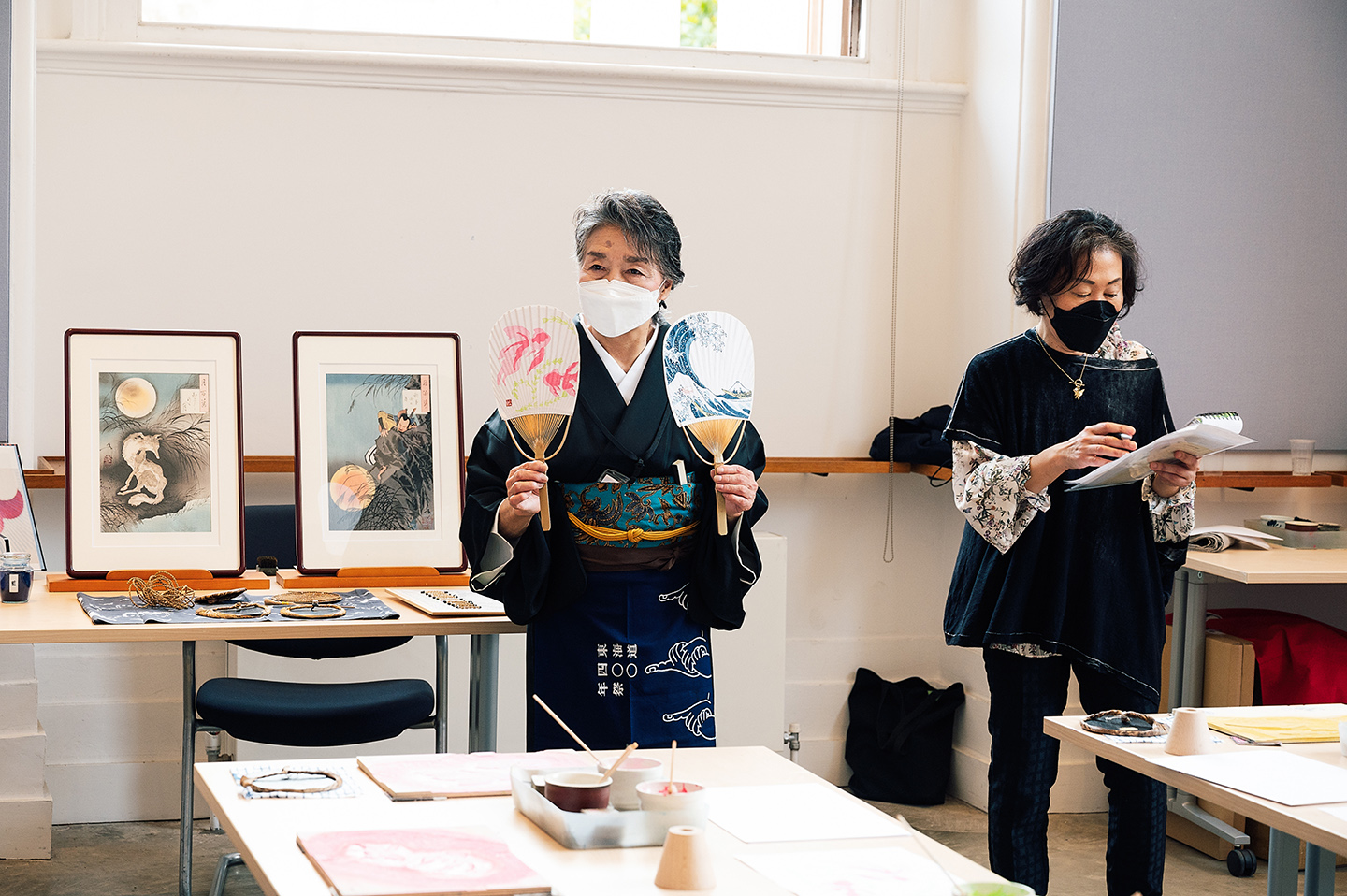 “Craftworks are used in people’s daily lives,” explained Yukiko Takahashi from Takahashi Kobo, “so I brought the frames of bamboo fans so that the completed prints could be attached to them. I told everyone that I hoped they would use the fans to cool off during the hot summer months next year.” 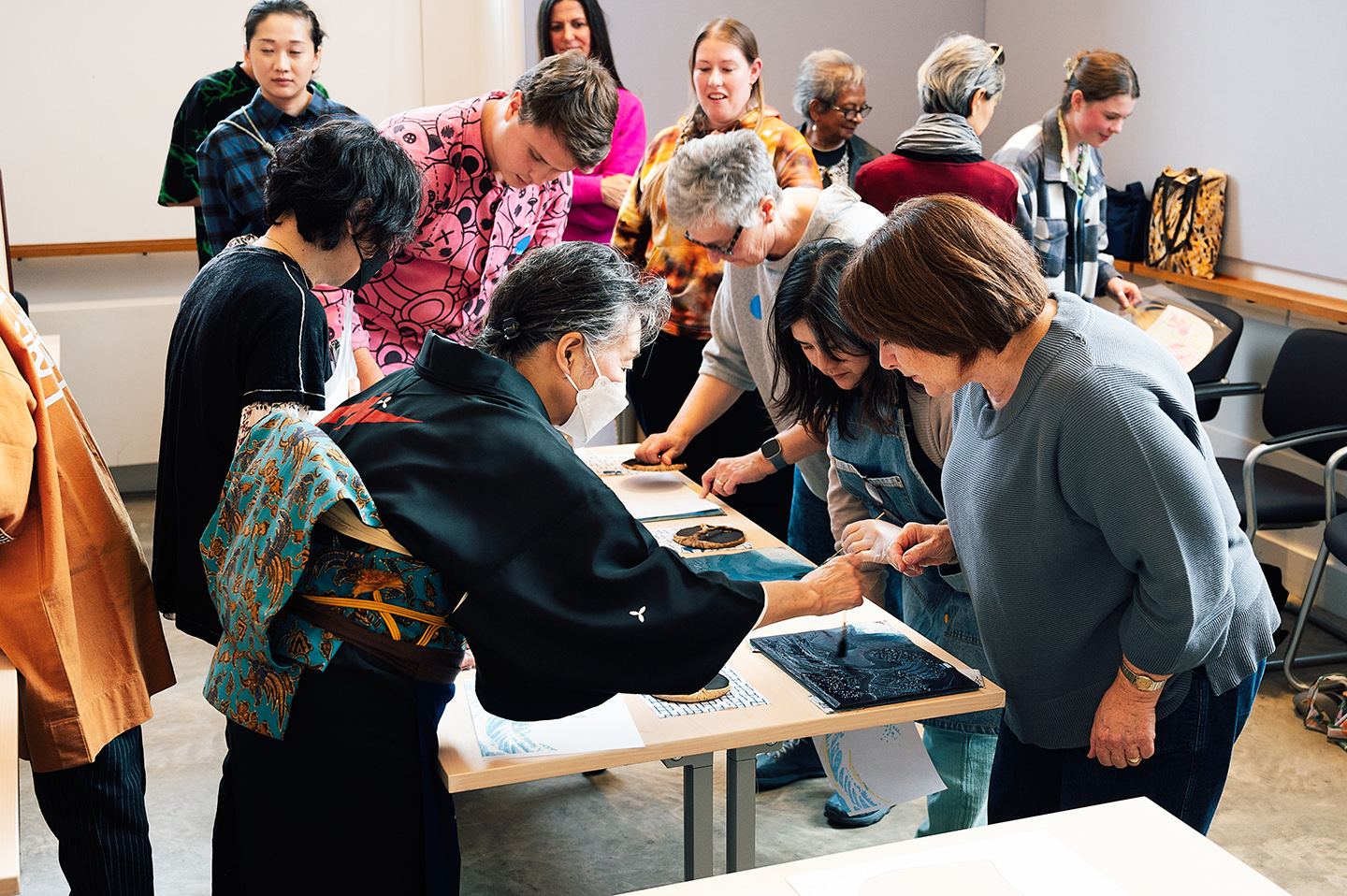 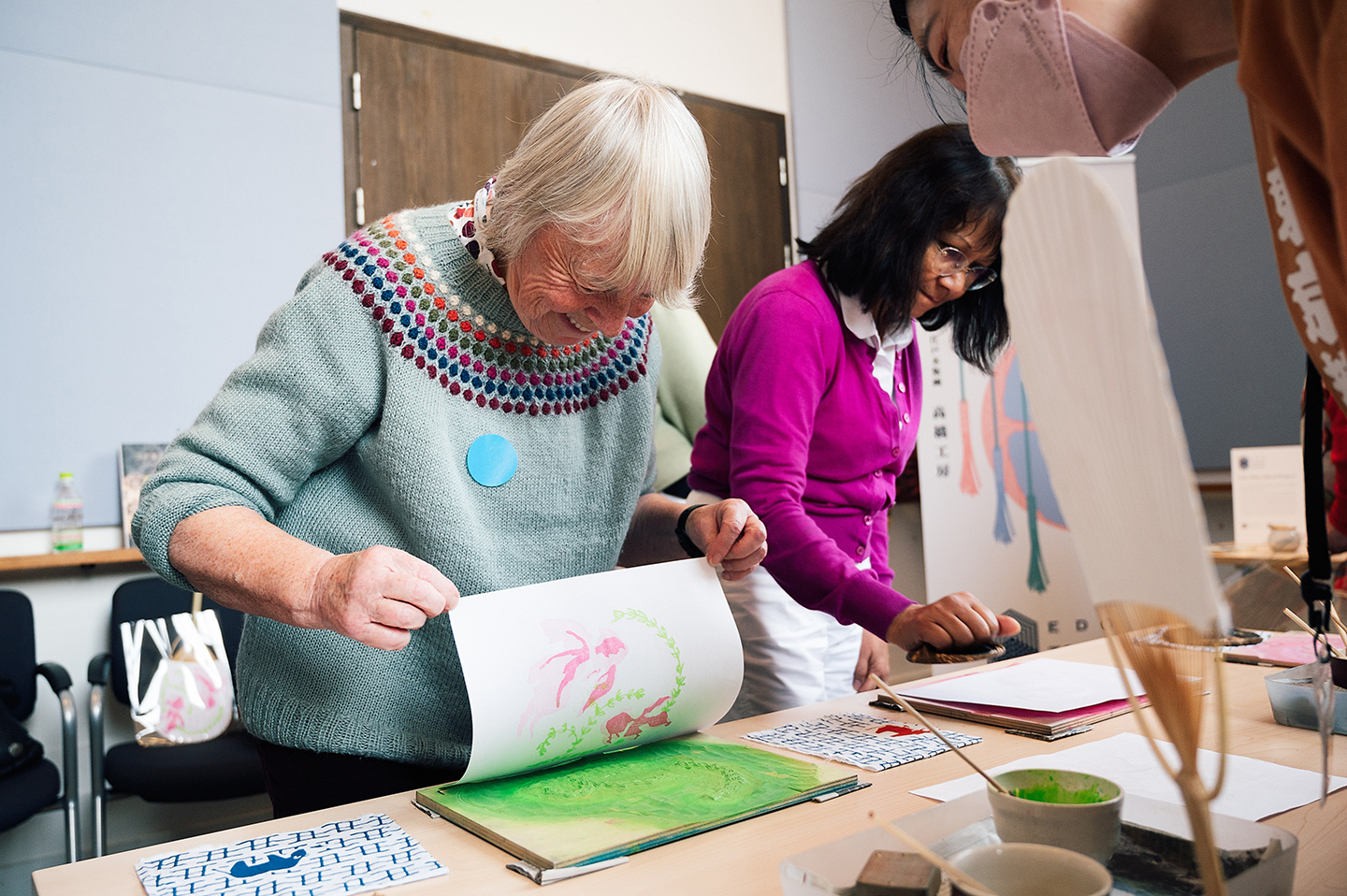 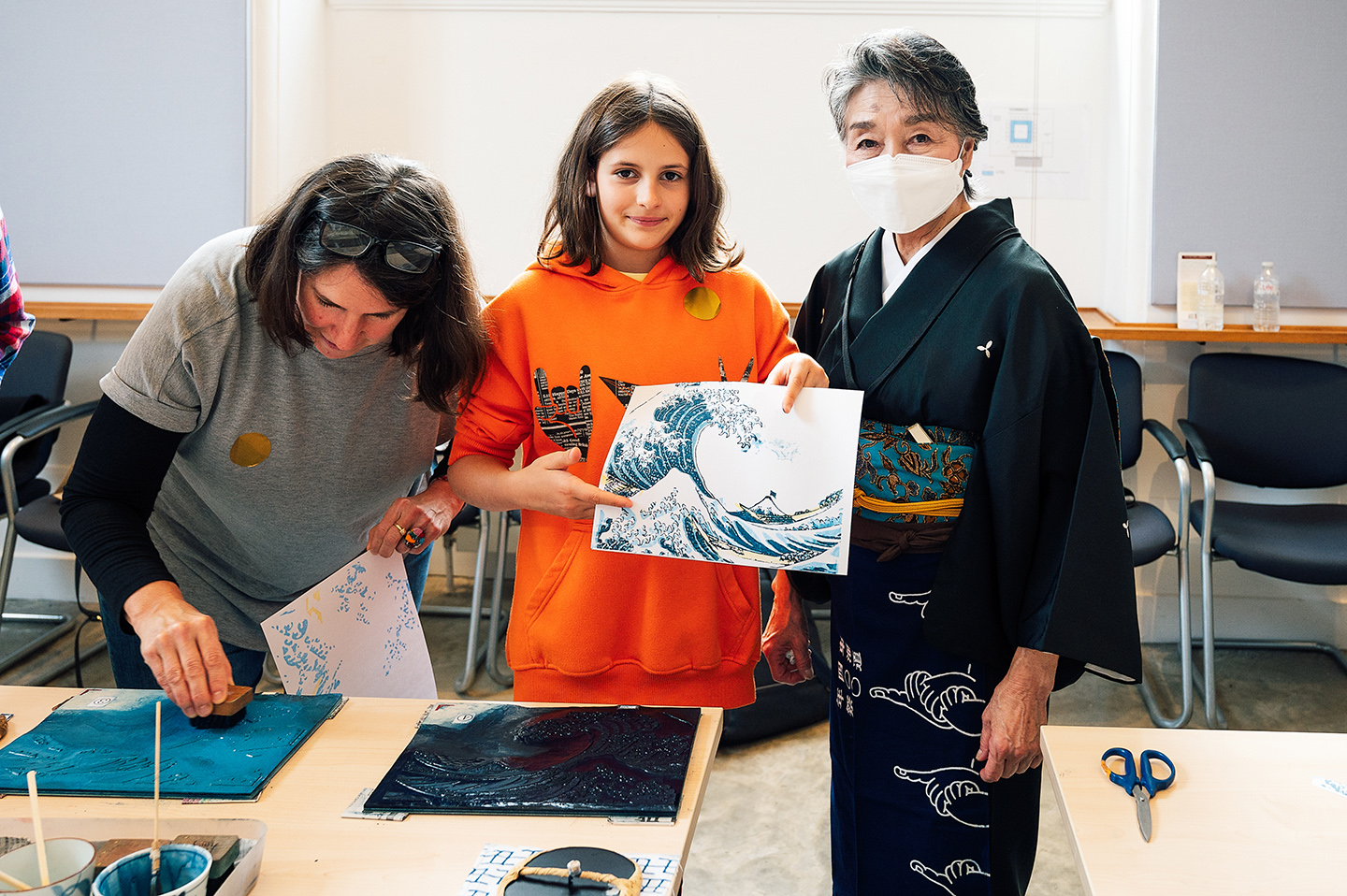 “In my workshops, I always begin by working with light colors or with colors used over smaller areas. I was happy to see the expressions of satisfaction sweep across the faces of participants as they finished by adding the darker colors, bringing the finished design into view.” (Yukiko Takahashi)

“In recent years, I’ve gotten requests to print not only ukiyo-e prints but also characters from video games. Edo woodblock prints also served almost like magazines that shared information about popular trends, so I’d also like to try my hand at using woodblock prints to encapsulate what’s hot in our modern age, as well.” (Yukiko Takahashi) 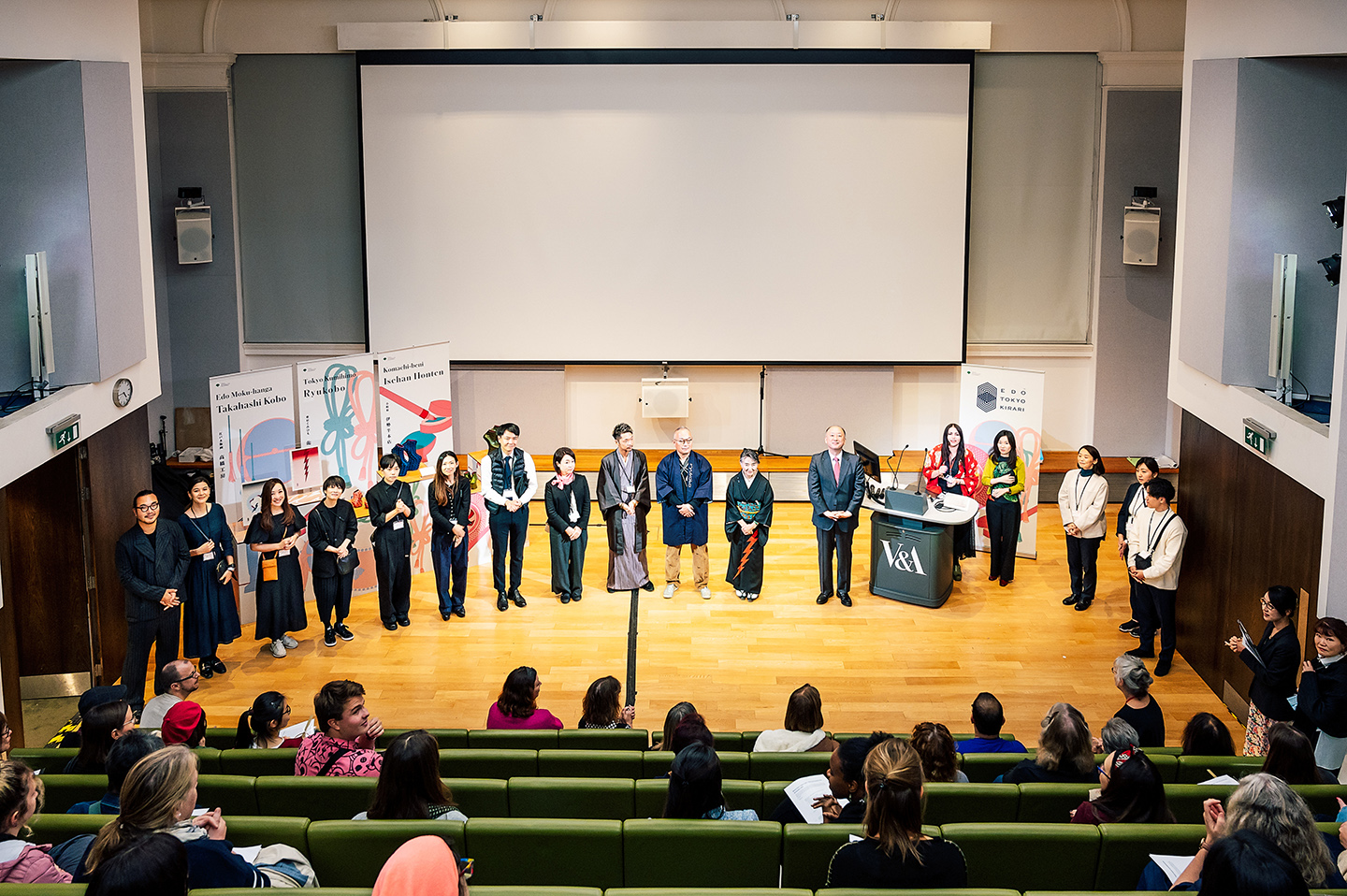 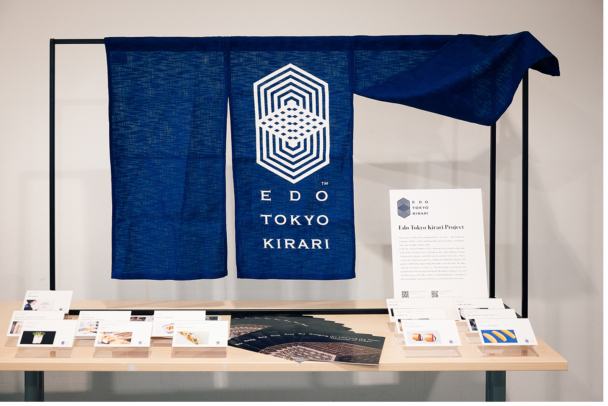 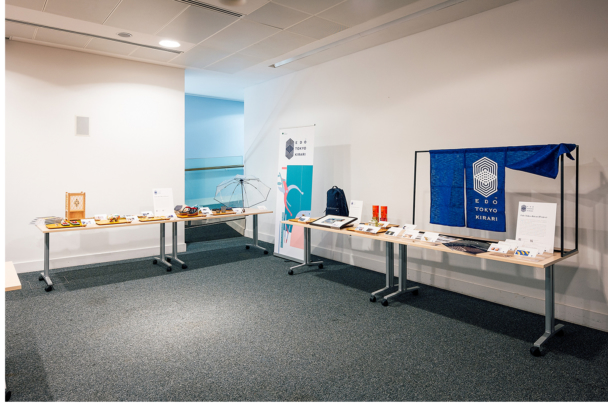 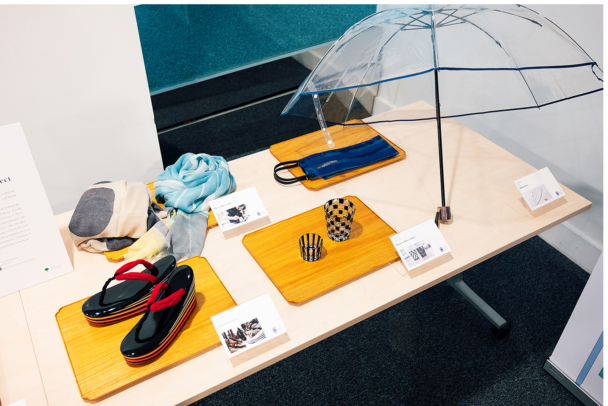 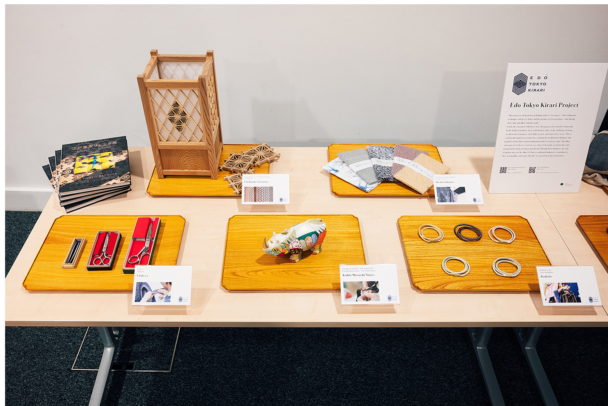 Exhibit Presenting the Edo Tokyo Kirari Project
Model craftspeople in the fields of fashion, food, and living were selected for the Edo Tokyo Kirari Project, and their representative works were brought to London and put on display. Some of the visitors to the art event asked where they could buy the works, and the success of the event demonstrated the potential for further overseas shows in the future. 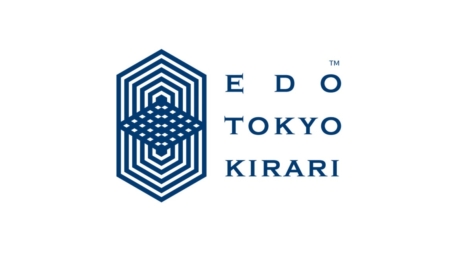 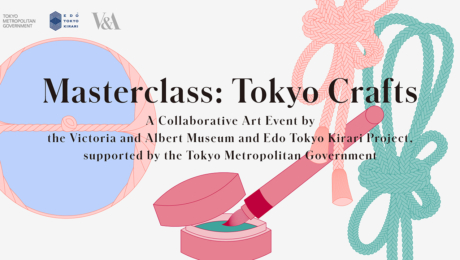 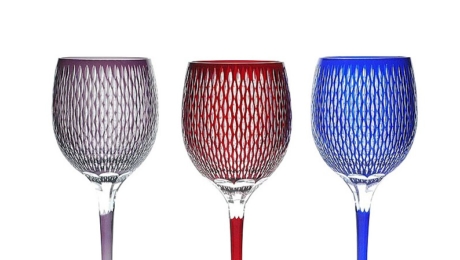