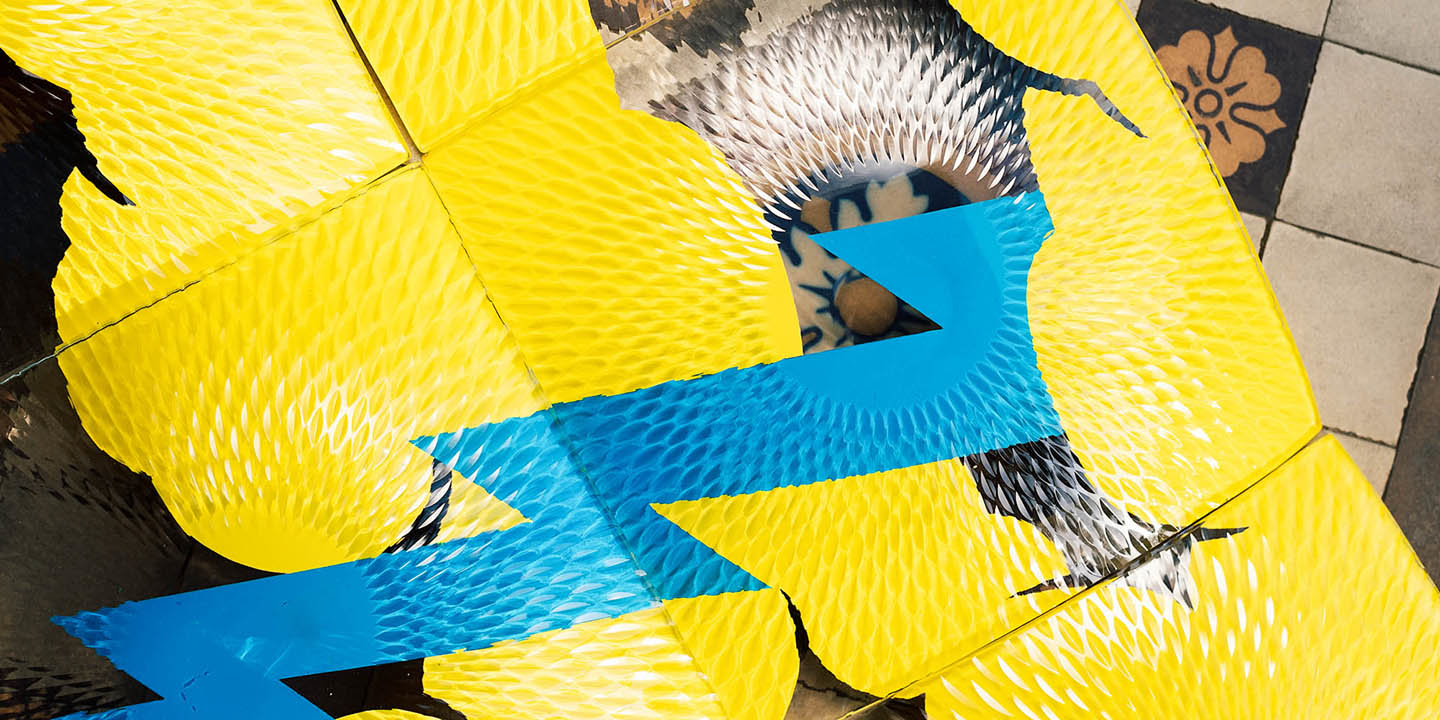 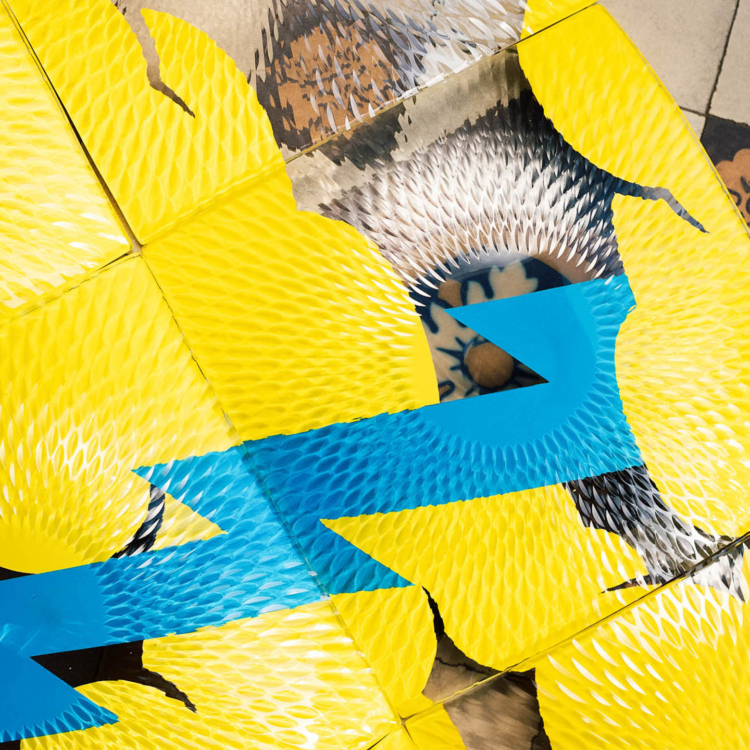 “Contemporary Art x Traditional Industries of Edo Tokyo” Reviewing the traditional culture of Japan, what should be communicated to the future?

The collaborative works by Noritaka Tatehana, a contemporary artist who serves as the exhibition director, and traditional industry businesses in Edo Tokyo, communicate to us various elements of the skillful techniques and long history that continue to be passed down from generation to generation. One would probably be able to relive the “Rethink” of the artist and traditional industry businesses through their works. 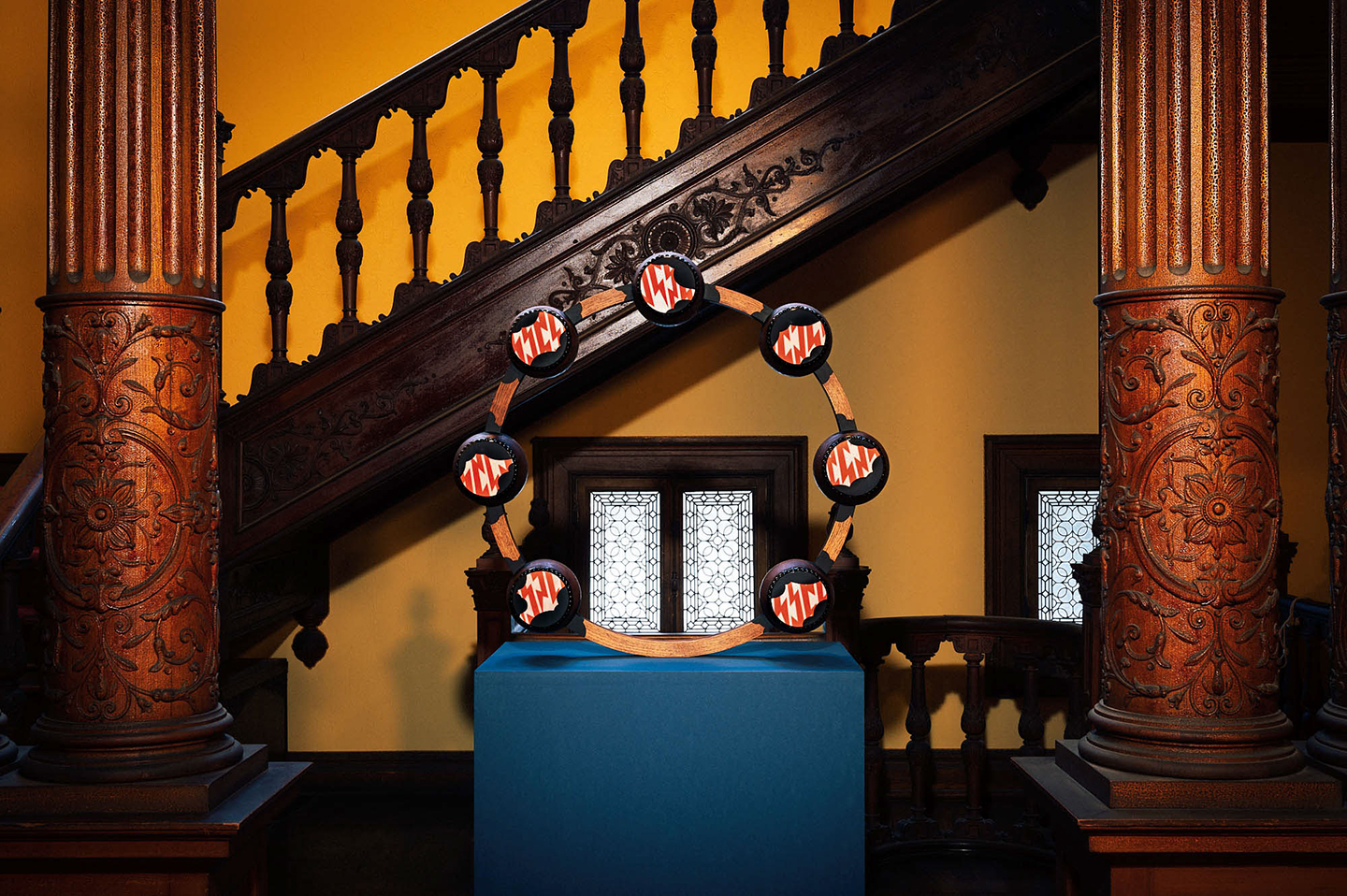 This work portrays the thunderous roar announcing the coming of gods, made by the drums of Raijin, the god of thunder. These drums were created by connecting small 4.5 sun (5.3 inch) drums calledgangudaiko or “the toy drums”. After the craftsmen of Miyamoto Unosuke Shoten connected the drums in a circle, they were painted at the atelier of contemporary artist, Noritaka Tatehana. 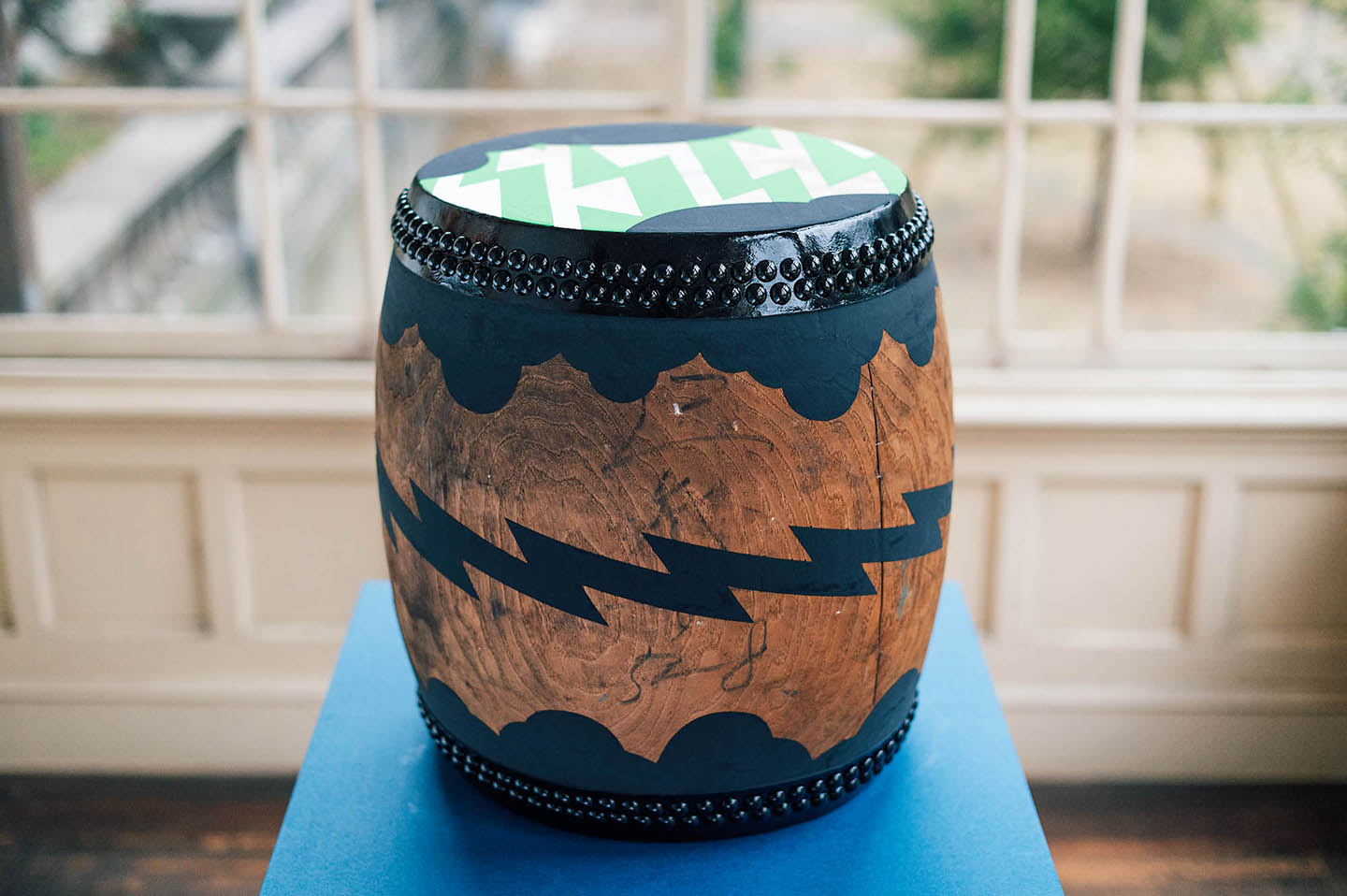 The drums used for this work were those which couldn’t be finished as a product back in the Showa 50s (1975-1984) because they were distorted or cracked during the drying process prior to stretching the skin over the drumheads. Therefore, for thenagadoudaiko (elongated drum) in particular, the rough look which appeared during the production process has been left as it is in this work of art. 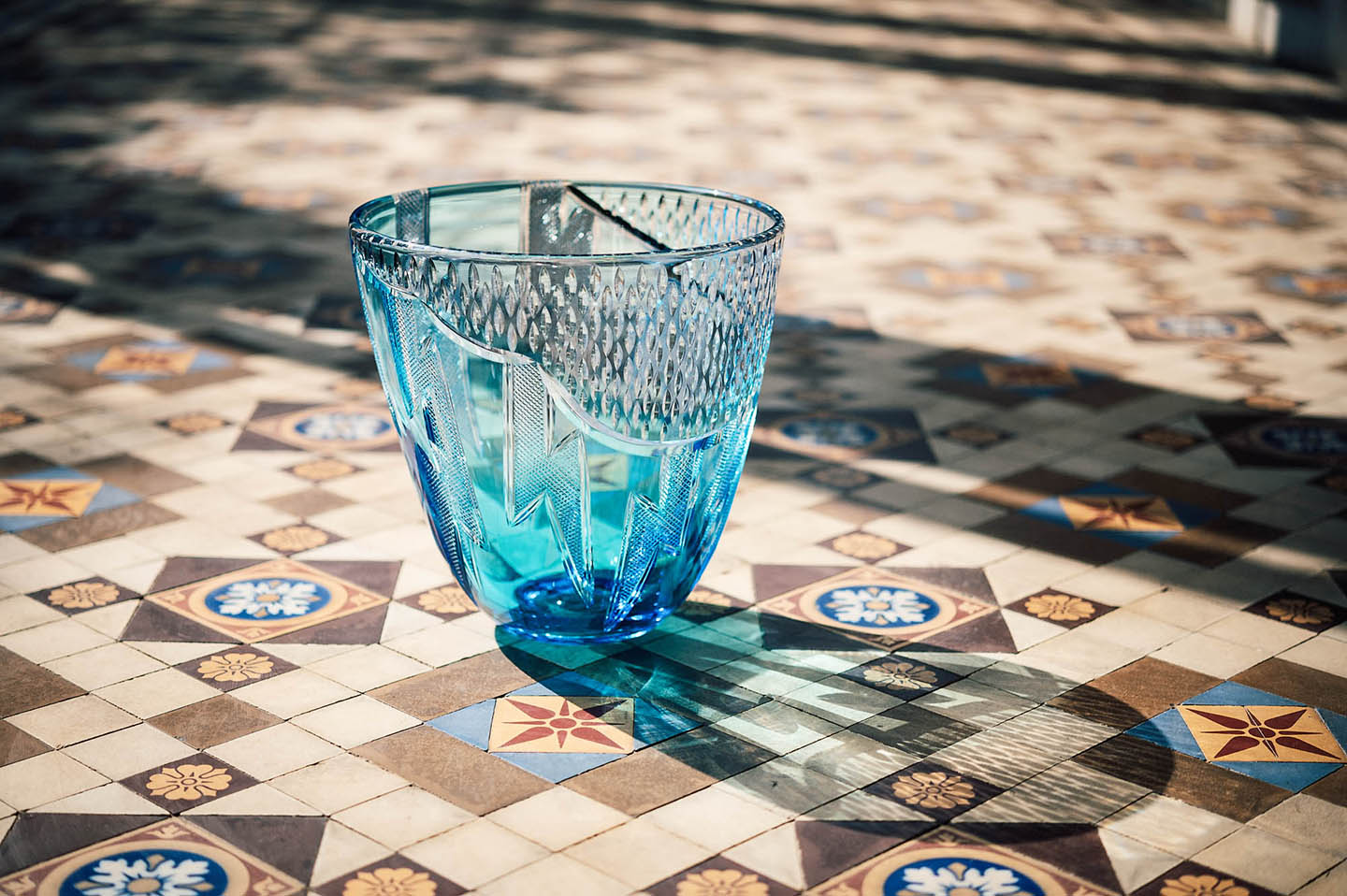 Thekome-tsunagimotif employed in this collaborative piece depicts stalks of rice. Rice is a symbol of prosperity, and this motif expresses prayers for an abundant harvest. Thekome-tsunagidesign, a true delight to the eyes, is the product of Hanashyo’s expertise with glass. 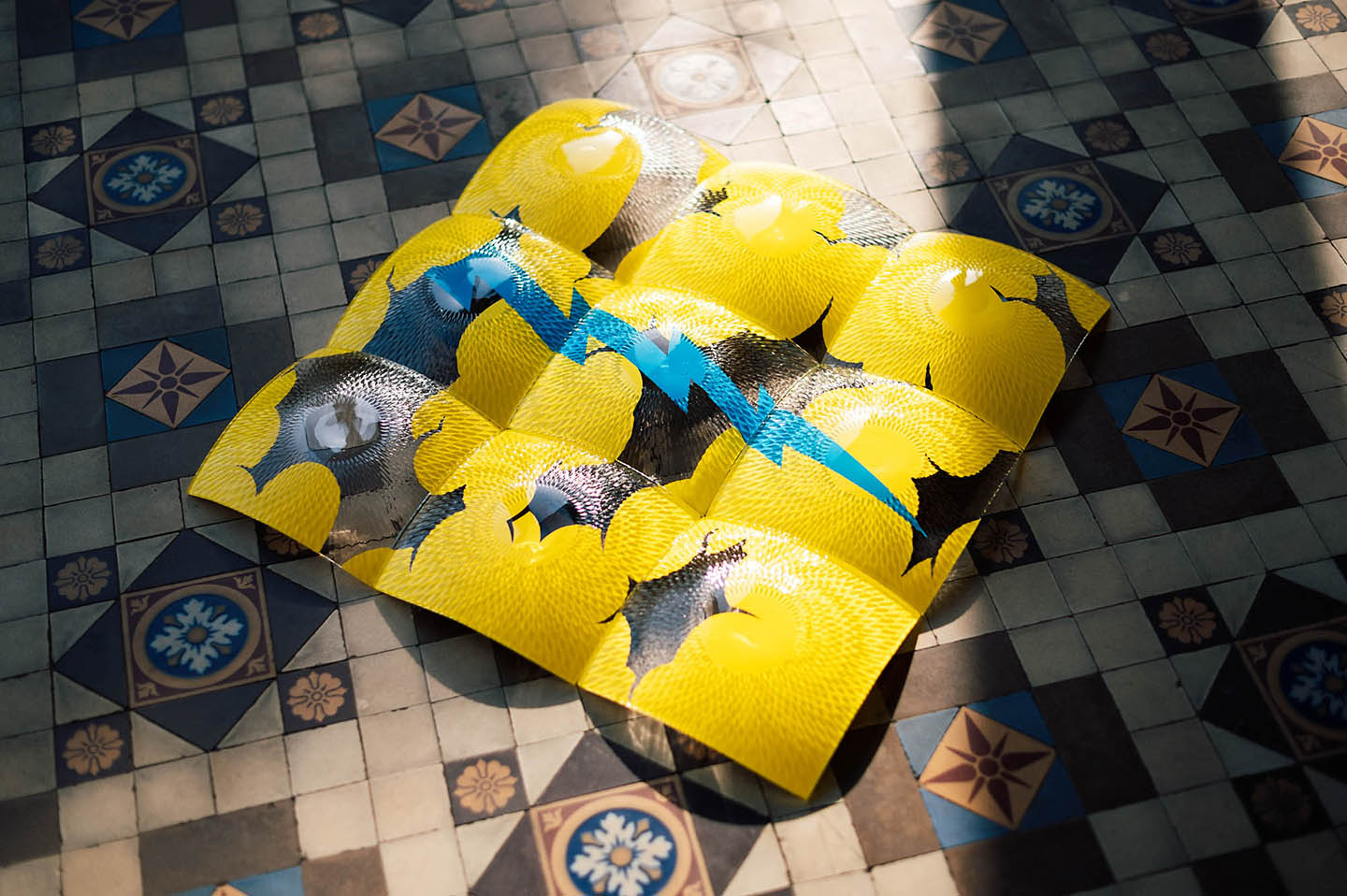 The Japanese word for lightning isinazuma, a combination ofina, meaning rice, andtsuma, meaning husband. It comes from an ancient belief that lightning causes the rice plant to bear rice. This piece therefore harmoniously blends the motifs of lightning andkome-tsunagi. The work consists of nine glass plates, combining transparent areas and areas where the back of the glass has been painted. They combine to depict a picture while also leveraging the reflections produced by cut glass. 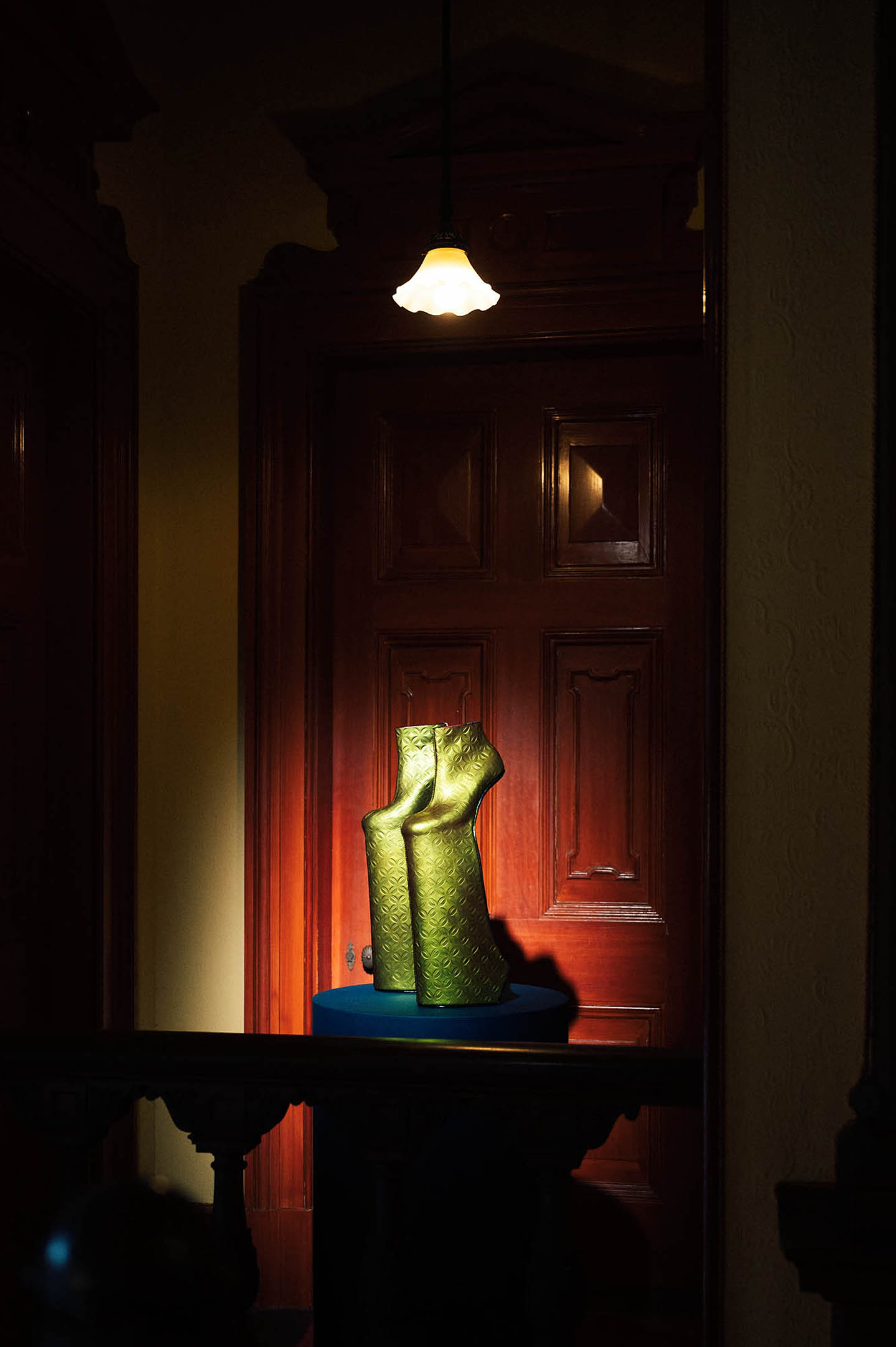 Heel-less Shoes
Noritaka Tatehana’s masterpiece, the Heel-less Shoes, was inspired by the courtesans orOiran’stowering-geta. This model, which is 50 cm high, is the highest he has ever crafted.

Beni, the red pigment, used in his collaboration project, is red when applied to the surface of the leather, but as it dries, gradually turns iridescent. After testing the base color and the color density of thebenimany times on prototypes, these heel-less shoes with iridescent shine were perfected. 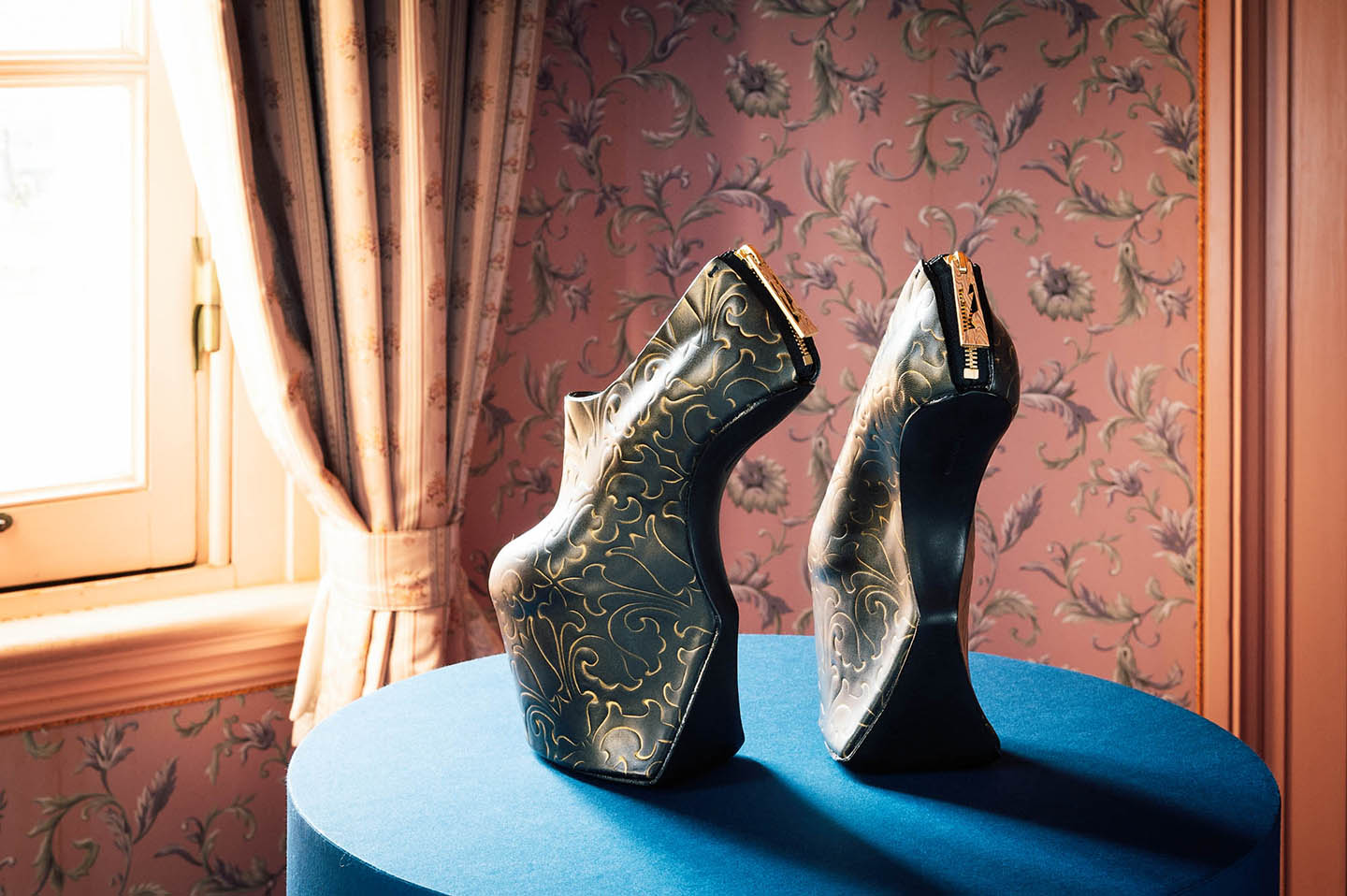 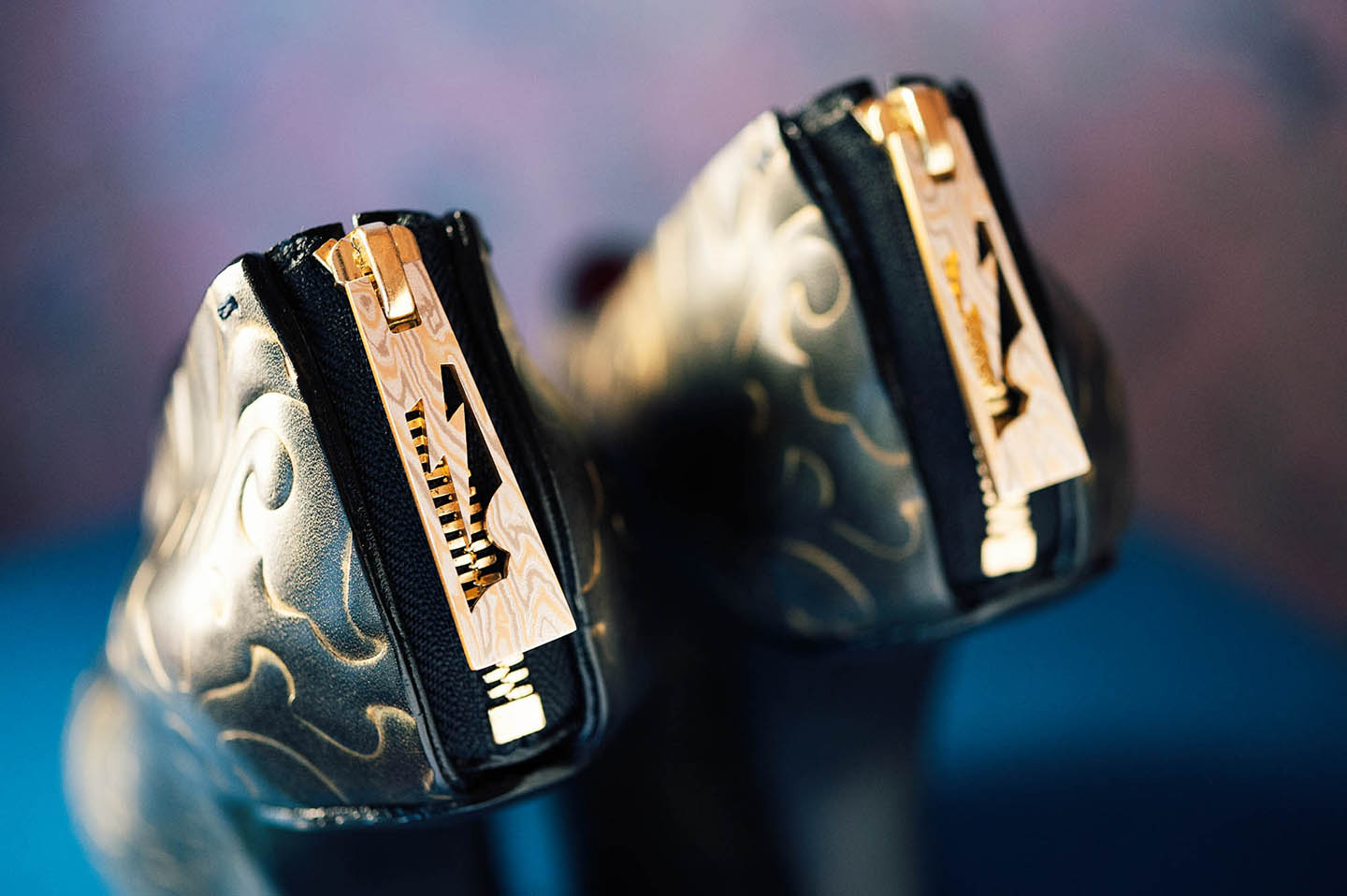 This exhibition’s collaborative piece, Heel-less Shoes, uses Mokume Gane for its zipper slider. This Mokume Gane does not simply have a modern design, but also has the openwork style once used by sword guards in the Edo period. As technology once used to create sword guards in the Edo period becomes one with Heel-less Shoes in today’s Reiwa period, one might say that a new page in Mokume Gane’s 400 year history has been opened. 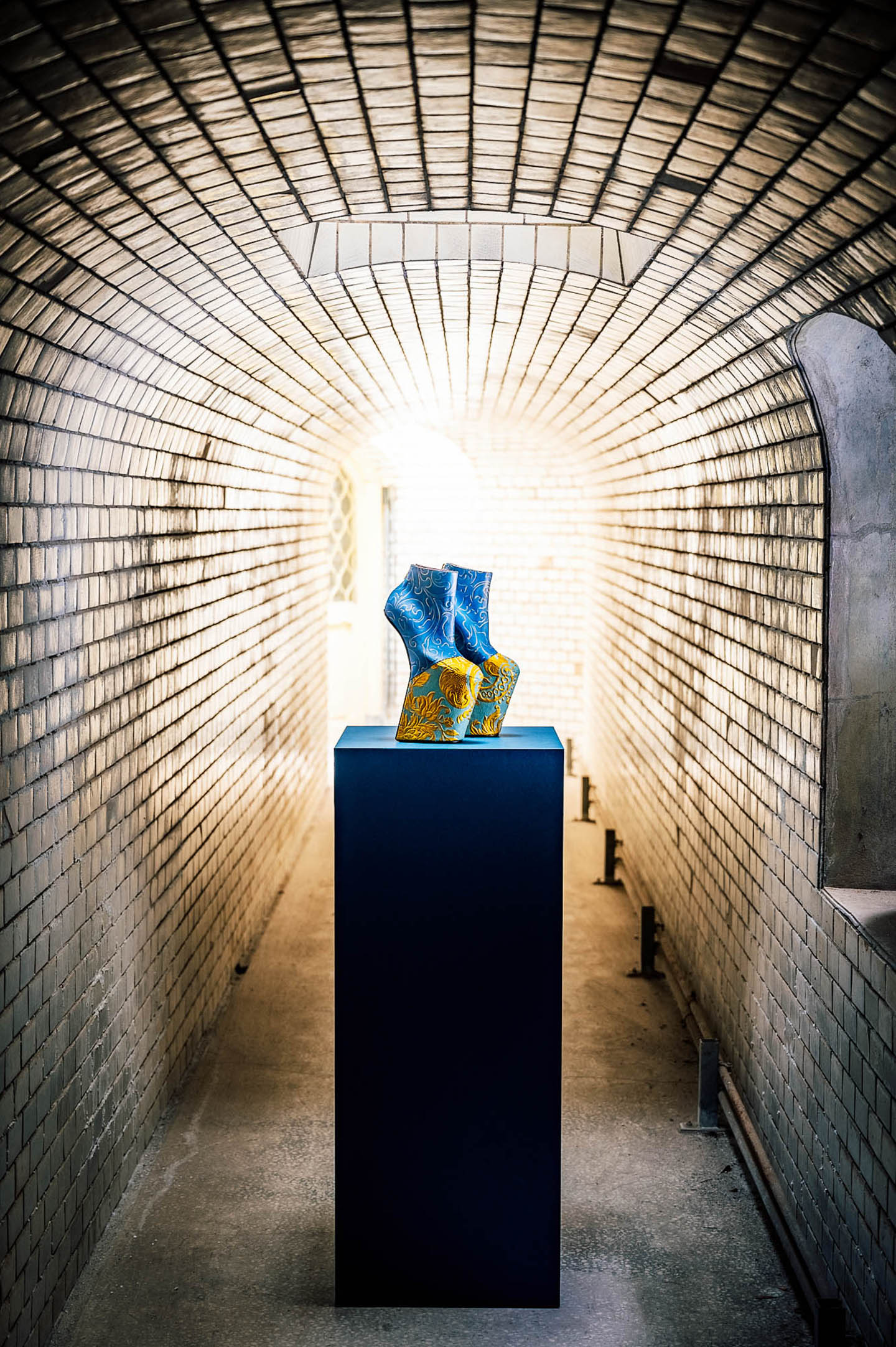 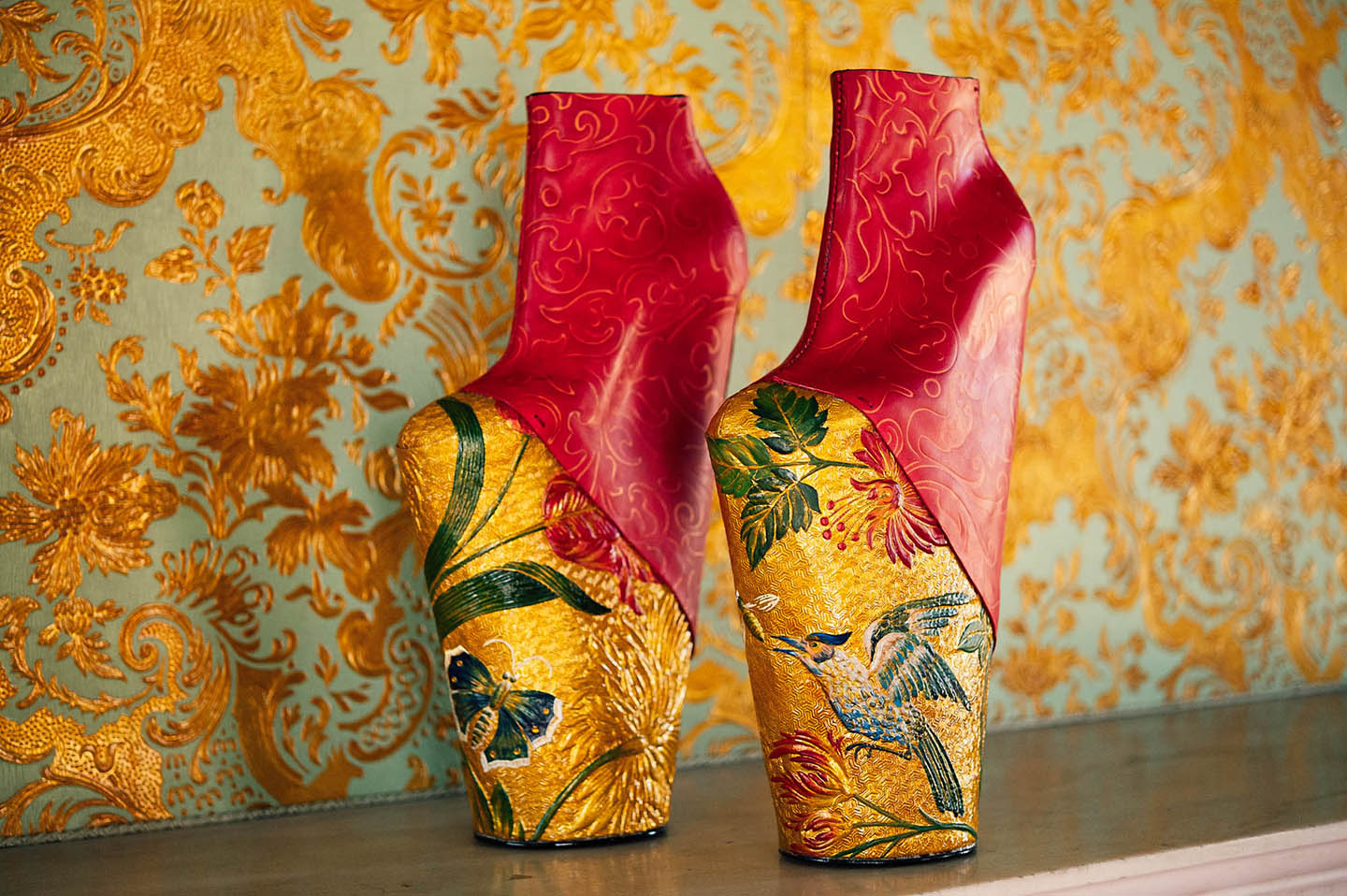 The Kinkarakami Institute has taken part in this exhibition through a special collaboration, recreating the wallpaper used on the second floor guest room of the Kyu-Iwasaki-tei Garden’s Western-style building. This recreated Kinkarakami was then used by contemporary artist Noritaka Tatehana to create special Heel-less Shoes. The upper part of the piece has Tatehana’s classic embossed leather, while the lower half uses the Kinkarakami paper. This piece contrasts the expression of embossed leather representing the gilt leather brought over from Europe, and expression of Kinkarakami that uses Japanese paper. Within this contrast one can feel the deep history that connects gilt leather and Kinkarakami. 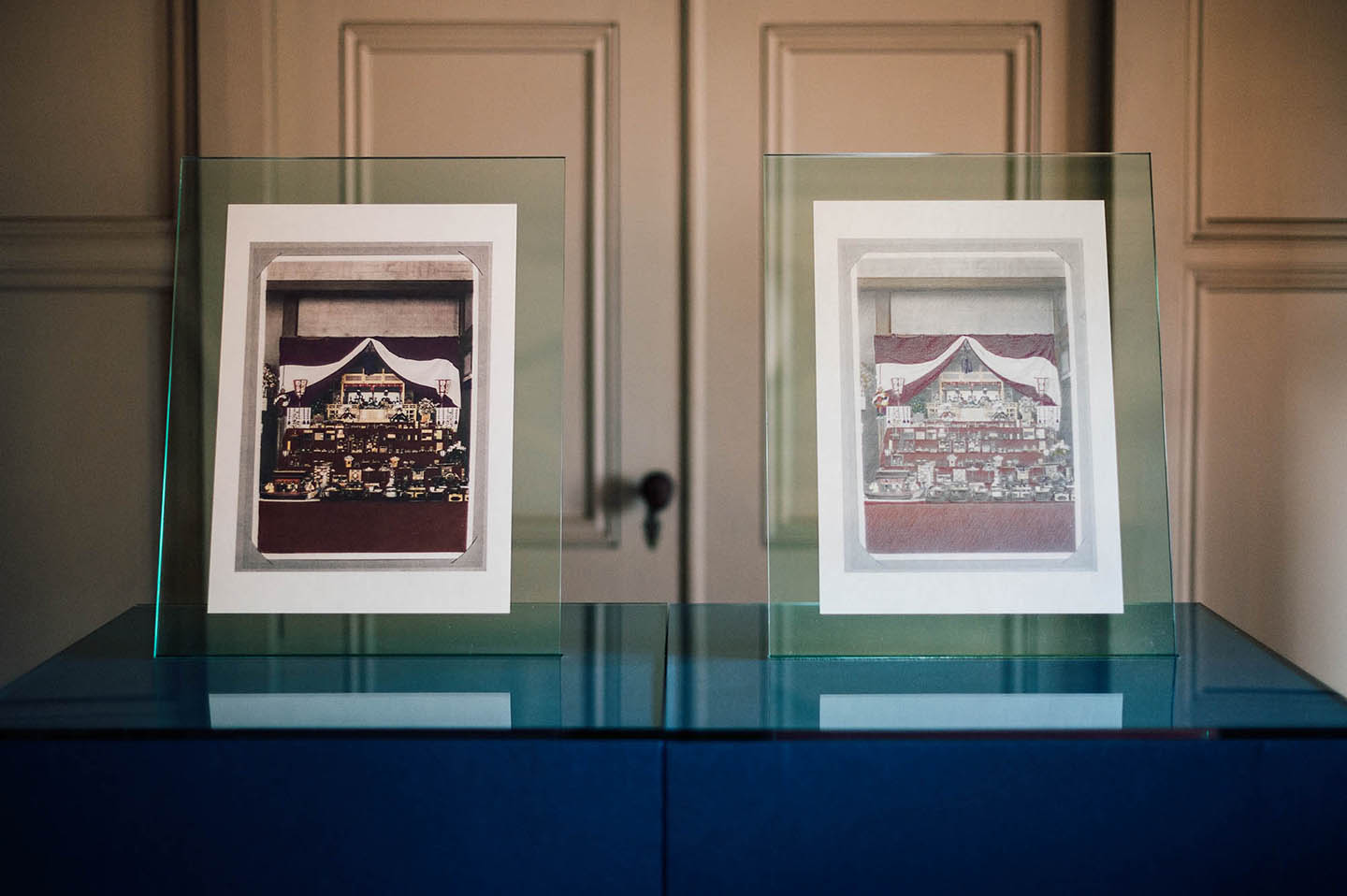 In this exhibition, Matsuzaki Ningyo has collaborated with a team led by contemporary artist Noritaka Tatehana to digitally restore photographic materials of the Iwasaki family’s seasonal festival dolls, that were once displayed in the family estate. With monochromatic photographs being hand-painted by Matsuzaki, these photos were then handed onto Tatehana’s team who began the digital restoration process. One can say that this has been a project only possible with the help of Matsuzaki Ningyo, who have built up a historical knowledge and refined techniques for the making of seasonal festival dolls over successive generations. 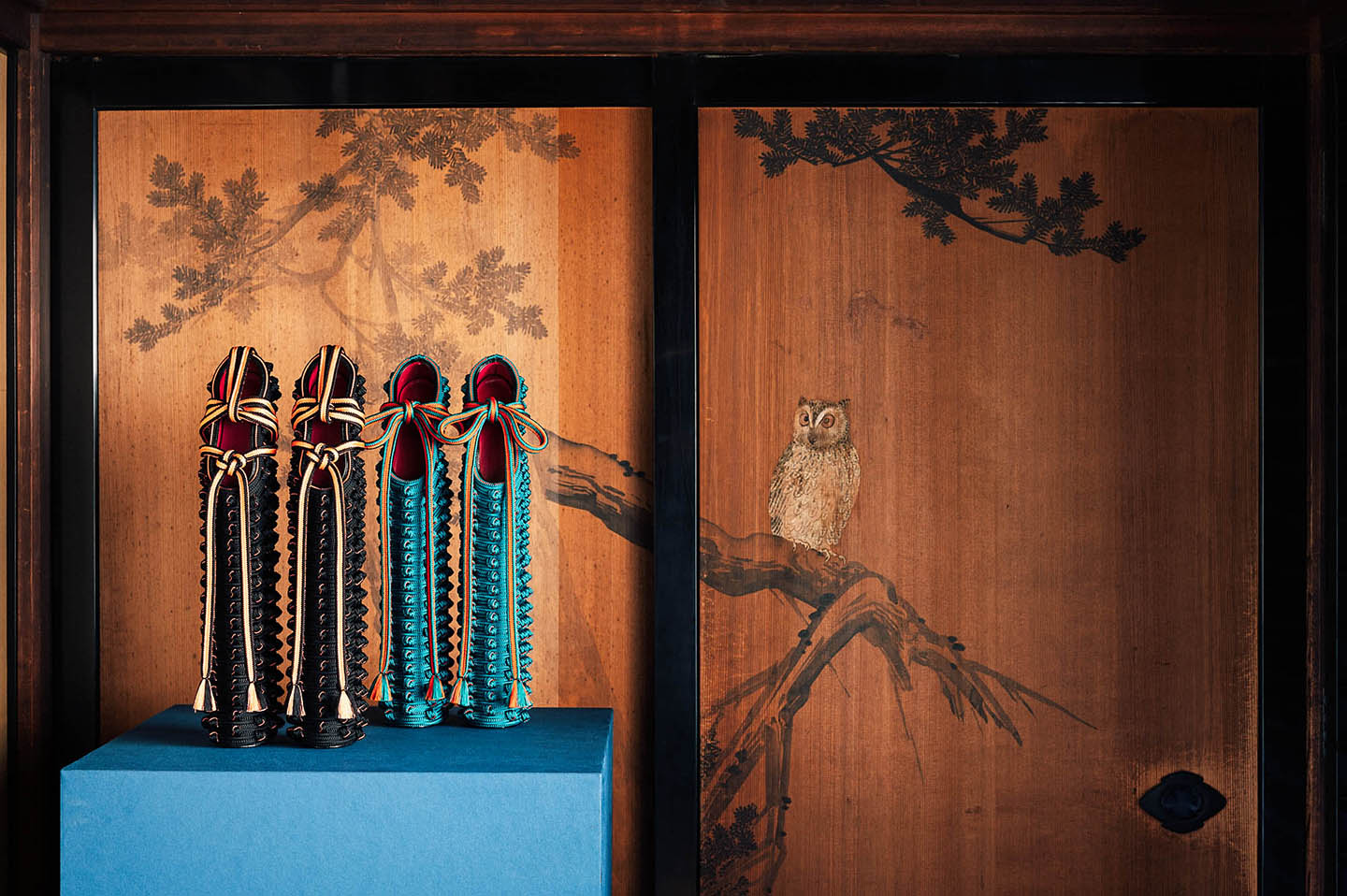 This particularkakuhimoor the square cord was woven in a newly-developed style specifically for this work. The colors of the front and back of the cord are different. This idea was derived fromhauraor the lining of the kimono coat calledhaori. It was extremely effective to use silk yarn dyed pink with Isehan Honten’sbenion the reverse side as an accent color. The knots tied at precisely every 60mm intervals give the texture a unique look and also succeeded in creating harmony with the decorative knots braided in theyurugi gumistyle of weaving. 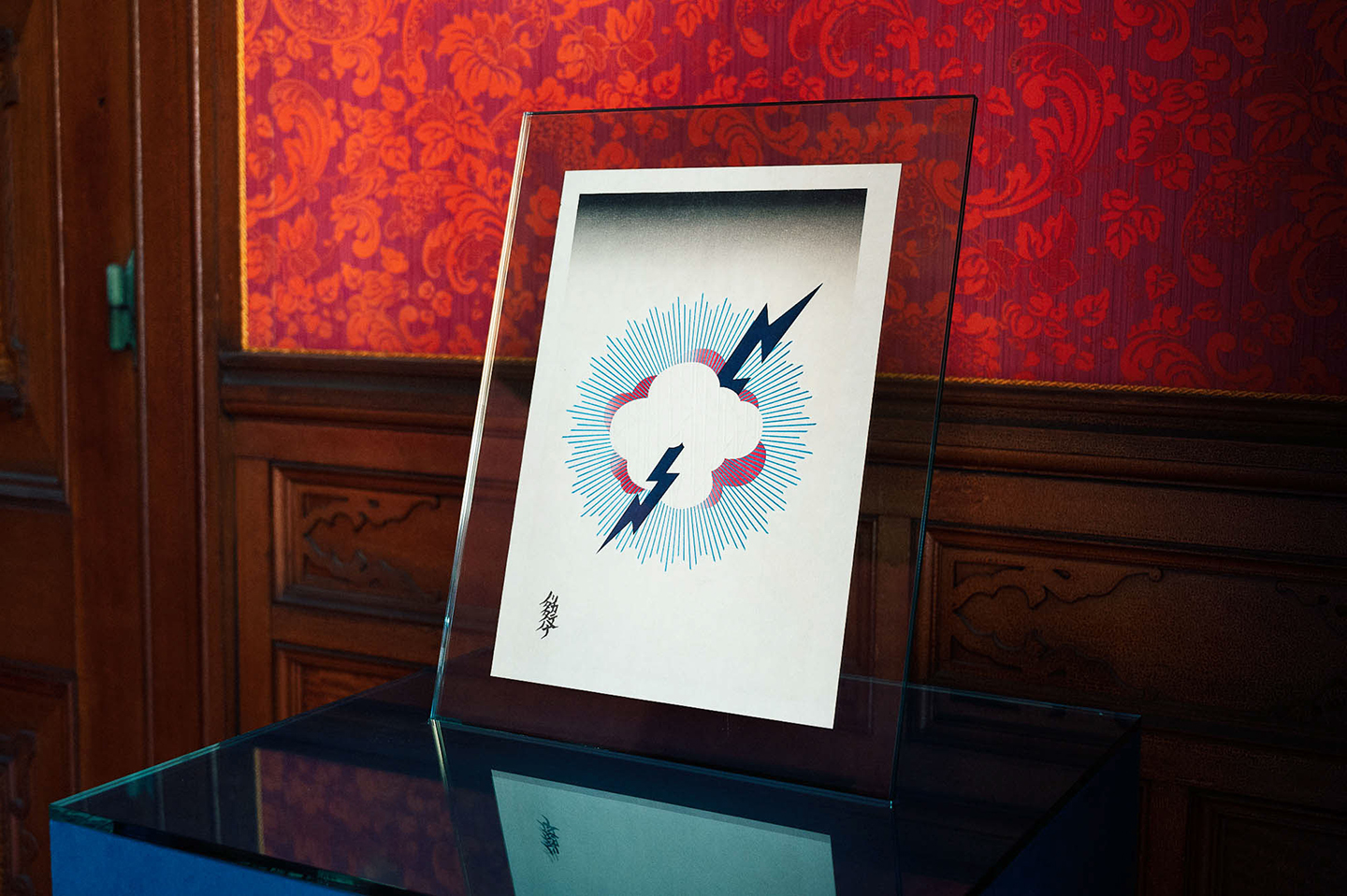 Two types of collaborative projects, one of woodblock prints using special printing technique andhoso-e or red woodblock prints of smallpox illustrations, were created. By looking back at the traditional techniques of each method, the cultural aspect of Edo period, which is the origin of modern printing, was recreated.Karazuri, for example, is a printing technique used to create an embossing effect without applying any color to the woodblock.Shoumenzuriis a technique used to give shiny luster to certain areas of woodblock print usingshoumenhan, a special woodblock carved to give luster to areas where desired.Kirazuriis a method applied to add sparkle on the background of famous Ukiyo-e artists such as Toshusai Sharaku and Kitagawa Utamaro’s works. 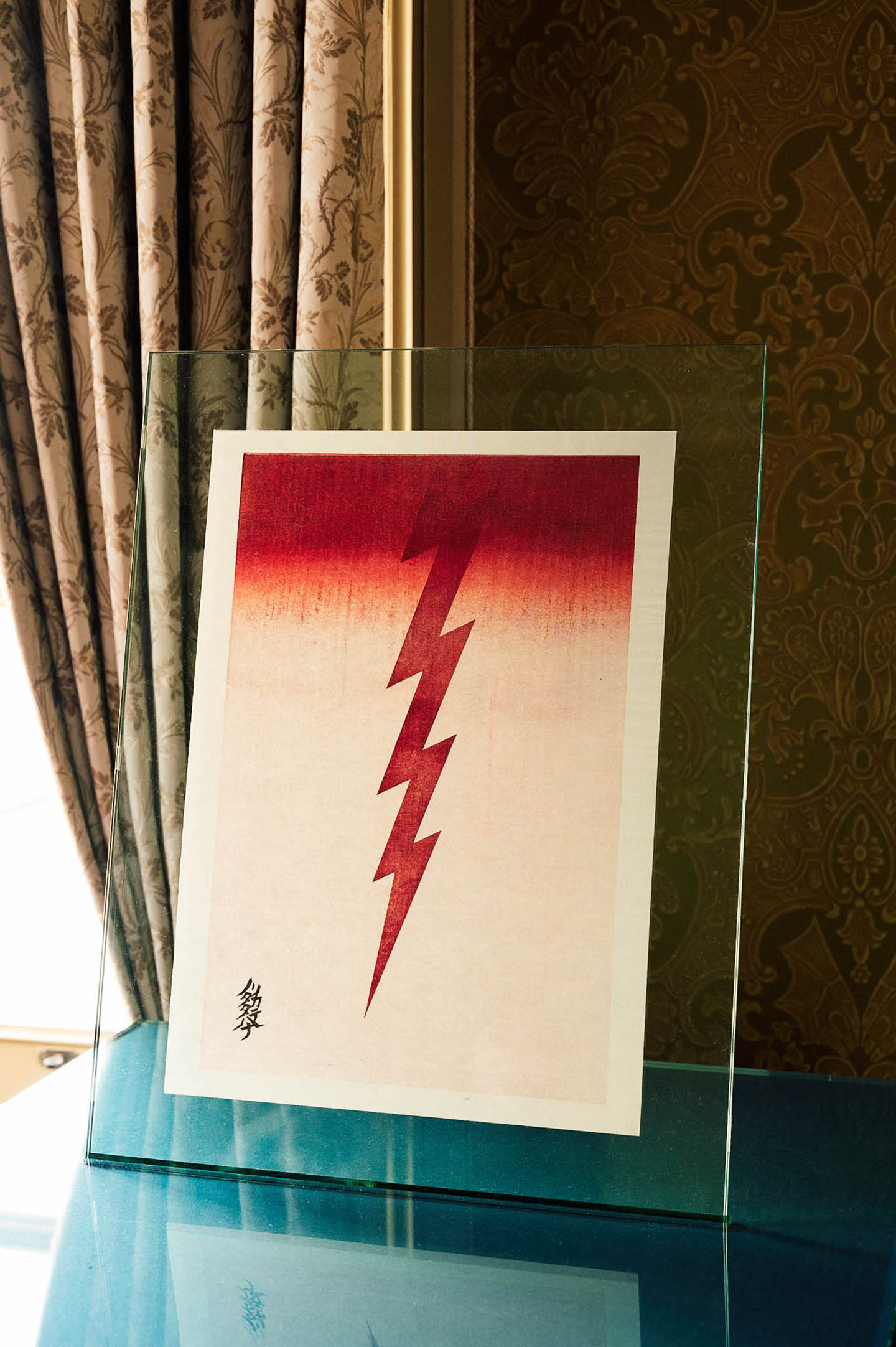 Hoso-e, printed in red pigment believed to ward off evil, are illustrations used as amulets for epidemics (smallpox). In order to challenge restoring the technique of printinghoso-ethe way they were originally printed during the Edo period, Isehan Honten’ssaiku-benior fine red pigment is used on the background. 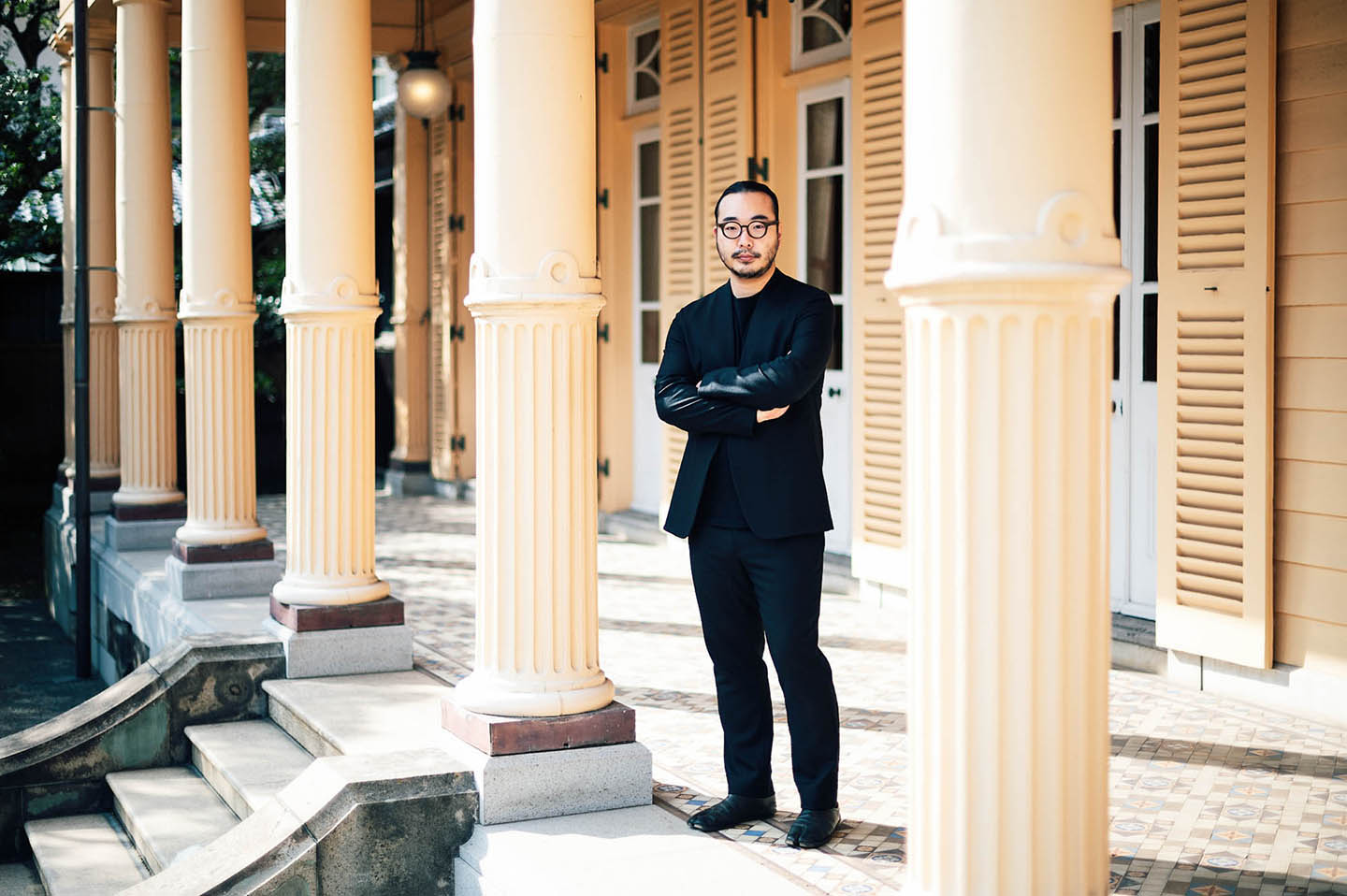 Edo Tokyo Rethink Exhibition Director
Contemporary Artist Noritaka Tatehana
Born 1985 in Tokyo, graduated from Arts Course Department of Crafts Tokyo University of the Arts. He created the heel-less shoes, inspired byOiran Takageta(wooden clogs), for his graduation project. The striking shoes went on to gain considerable notoriety when they were enthusiastically adopted by Lady Gaga. Today, Tatehana is a contemporary artist who collaborates extensively with traditional craftsmen and artisans. His work is featured in exhibitions in Japan and throughout the world, with many of his pieces on permanent collection at prestigious institutions such as the Metropolitan Museum of Art in New York and the Victoria and Albert Museum in London. 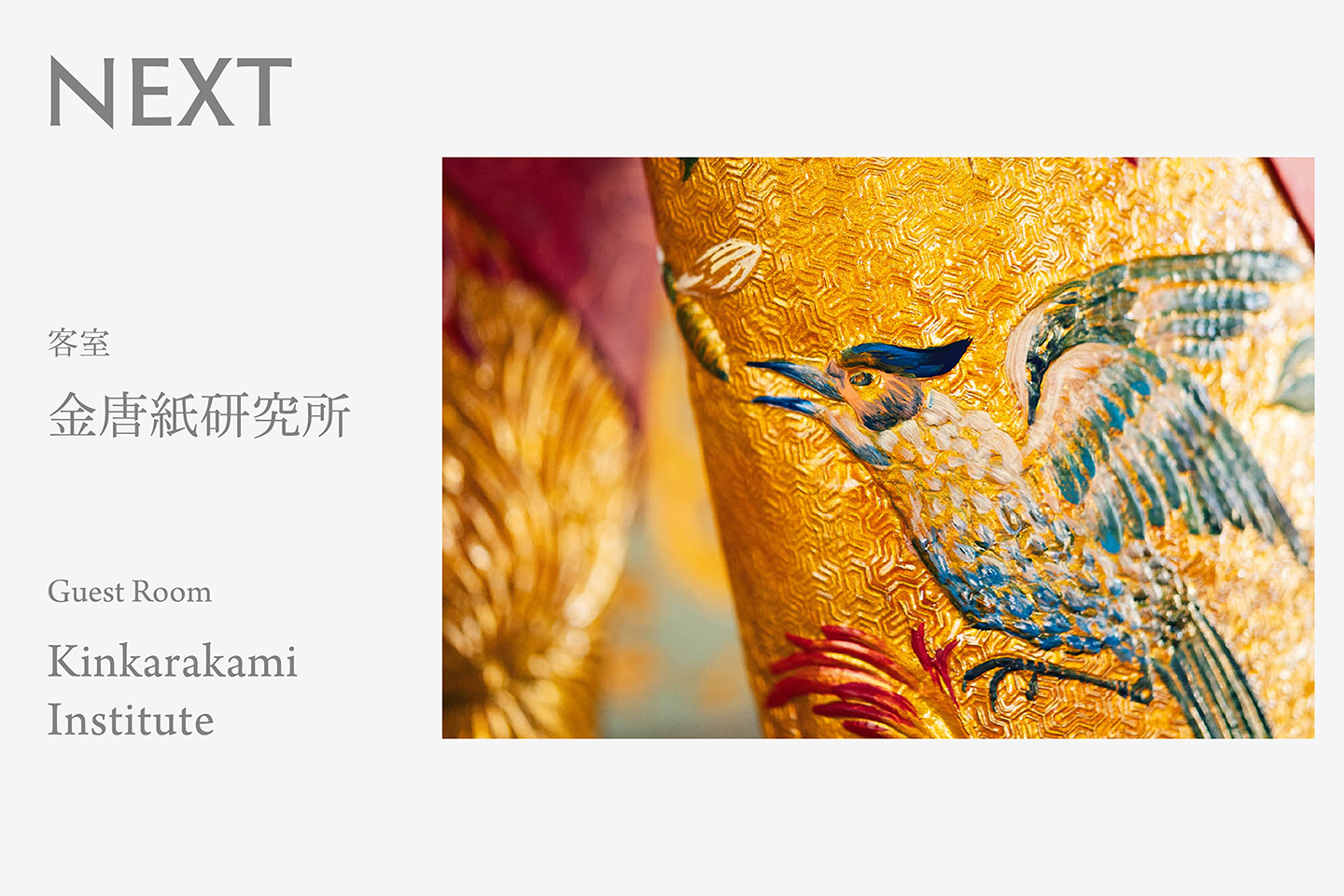 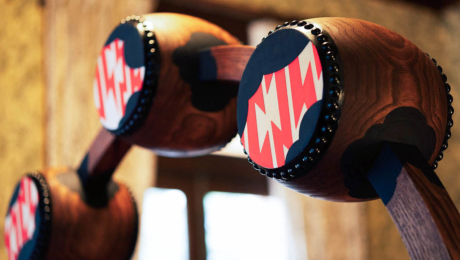