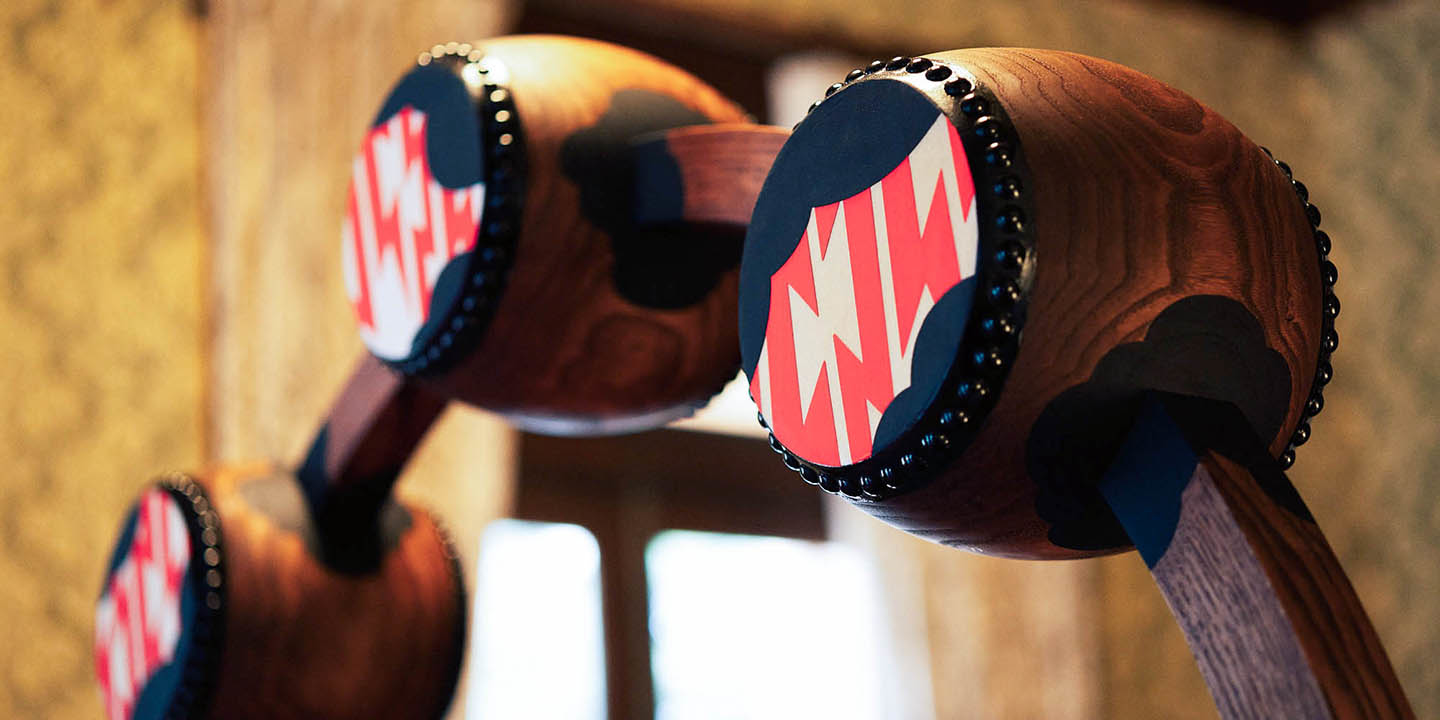 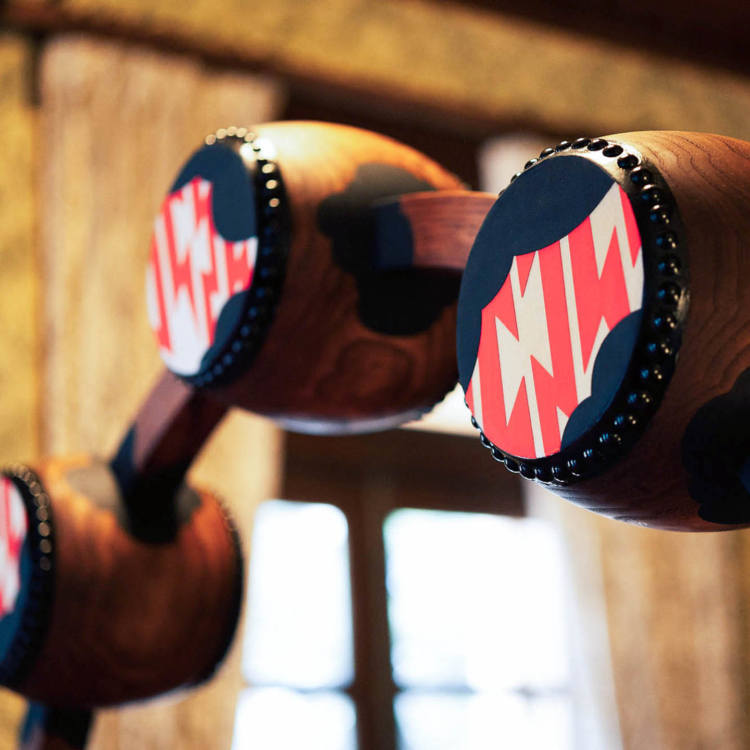 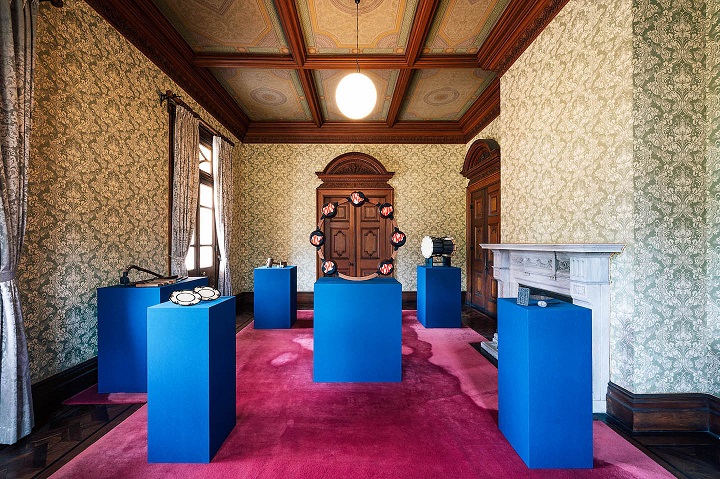 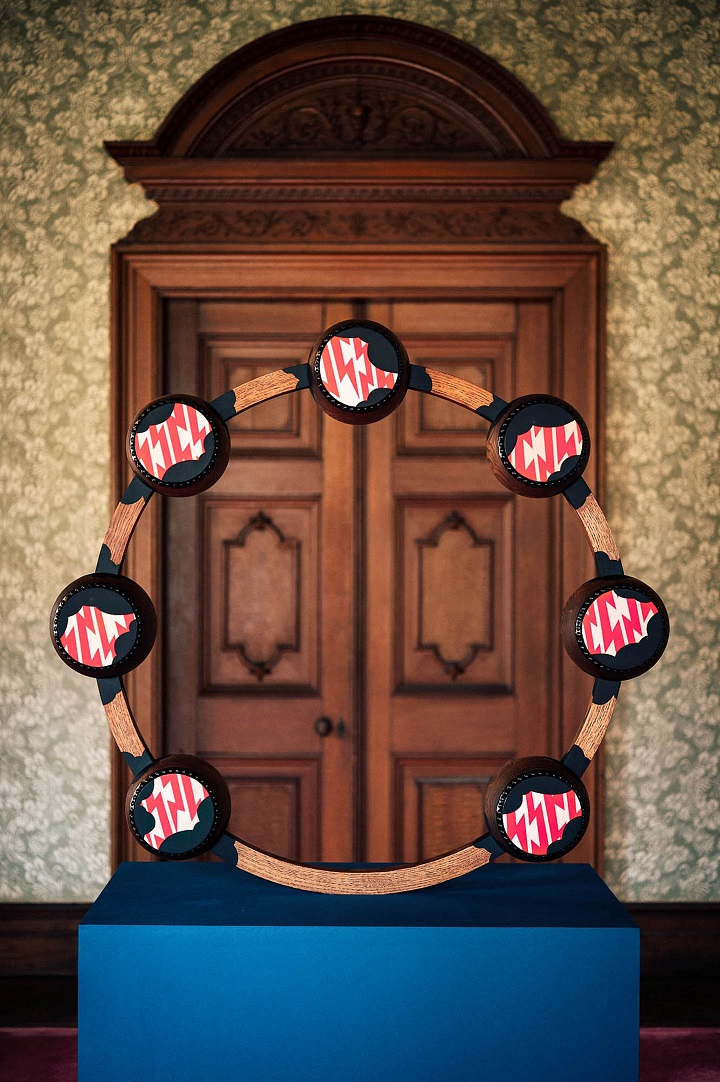 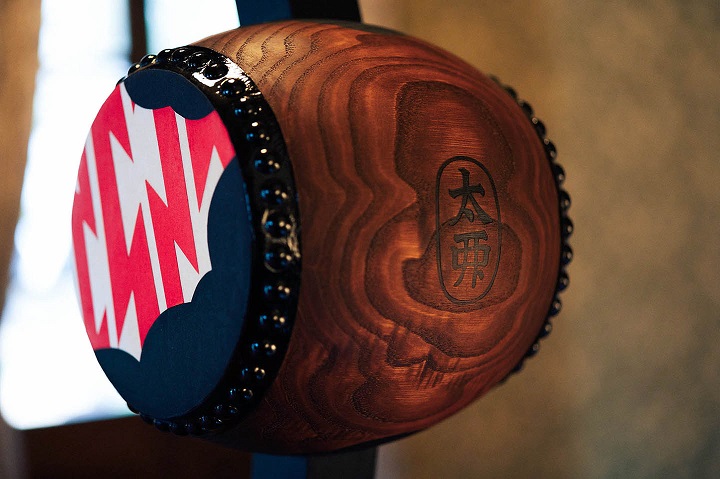 This collaborative work includes a piece consisting of small connected drums, roughly 14 cm in diameter, calledgangu daiko, or toy drums. Their circular arrangement is evocative of the drums used by the god of thunder.

Drums created by the craftsmen of Miyamoto Unosuke Shoten were linked in a circle by a woodworker using pieces of chestnut wood, the same material from which the drums were made. The piece was then painted in the studio of contemporary artist Noritaka Tatehana.

Some drums are made with wood from trees over a century old. After the trees are felled and cut, the wood is then dried for anywhere from three to five years before being painstakingly finished by a craftsman using a plane. 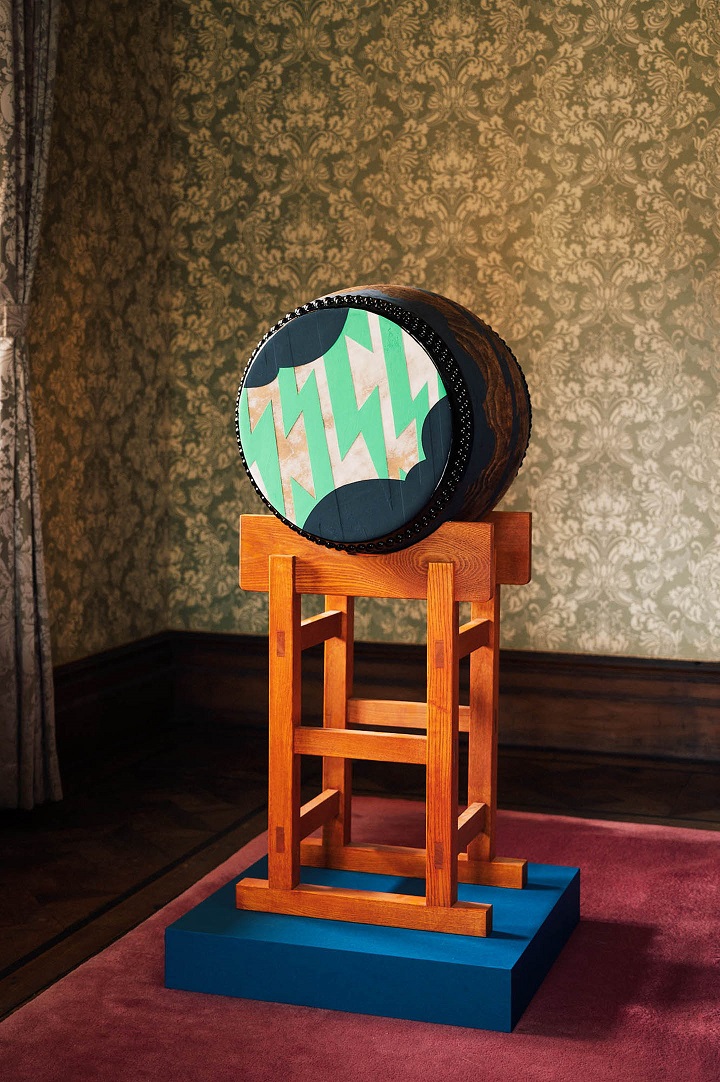 The drums used in this piece date back to the mid-1970s, and were pieces which were unsuitable for use as actual drums due to the wood warping or splitting during the drying process, before a leather drum head could be attached.

The rough and rugged feel of a work in progress lives on in the drums, especially thenagado, or long-bodied, taiko drum. 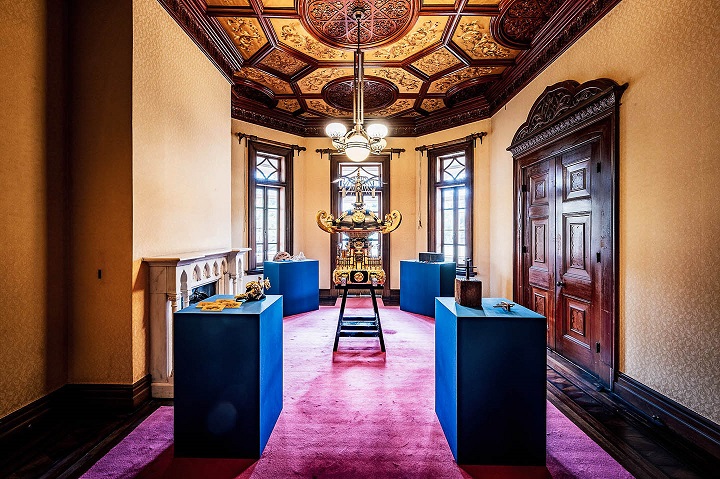 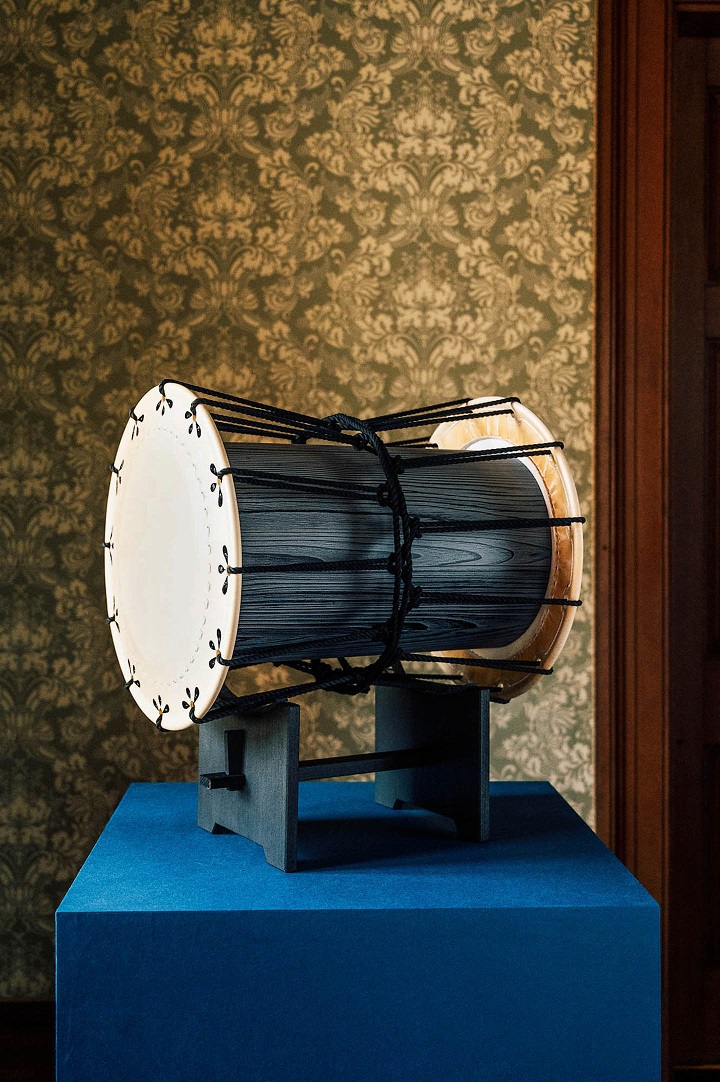 Forest-sustainingtaikodrum series
Thesetaikodrums were made as part of a project that takes advantage of Tokyo’s forest resources and craftsmanship to create musical instruments in a sustainable manner, thereby promoting responsible use of resources. 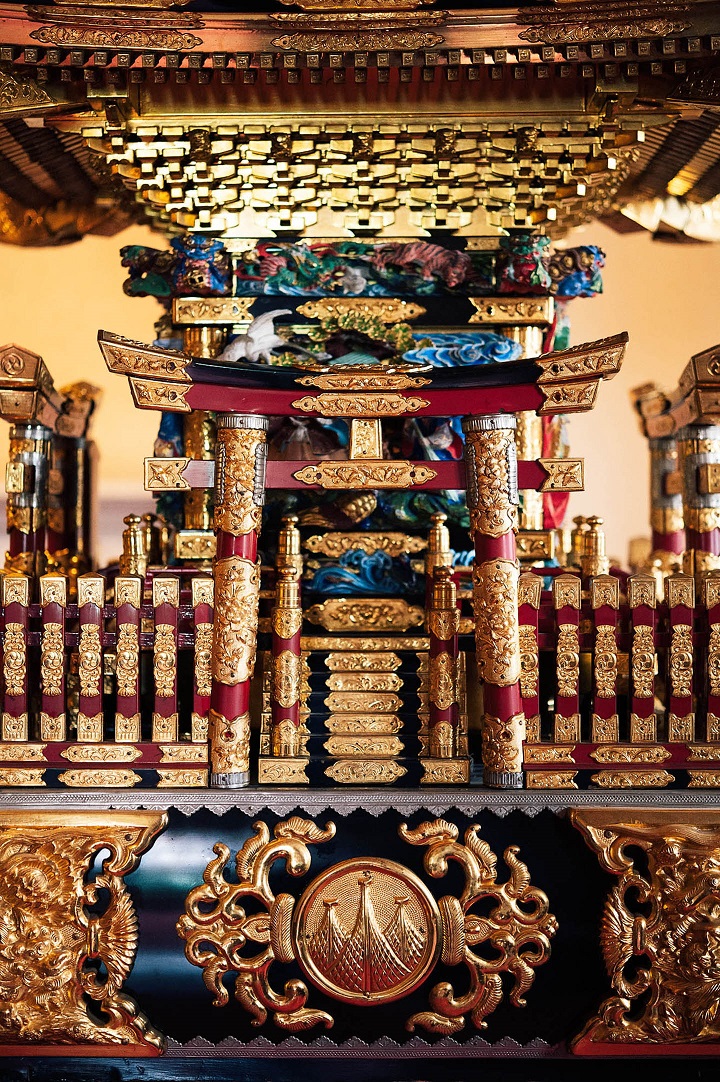 Sanja mikoshi
Thismikoshi(portable shrine) was crafted by Miyamoto Unosuke Shoten around 1955. It was used in the Sanja Festival. 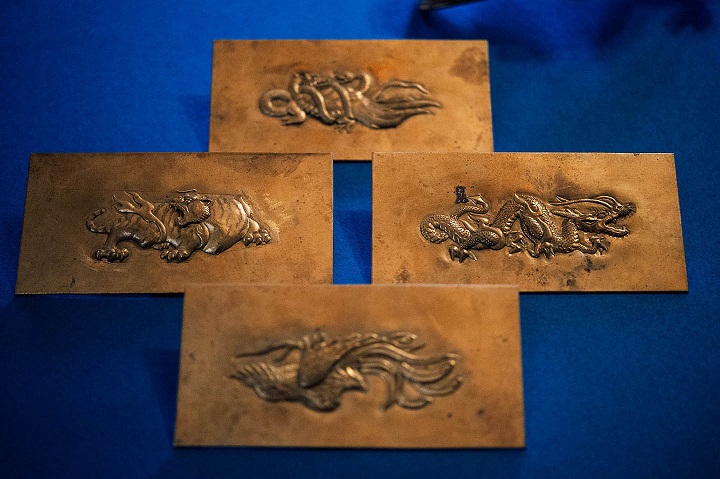 Mikoshihardware
This is hardware to be attached to amikoshi. Engravings depict the traditional guardian animals: the azure dragon, white tiger, vermilion bird, and black tortoise. 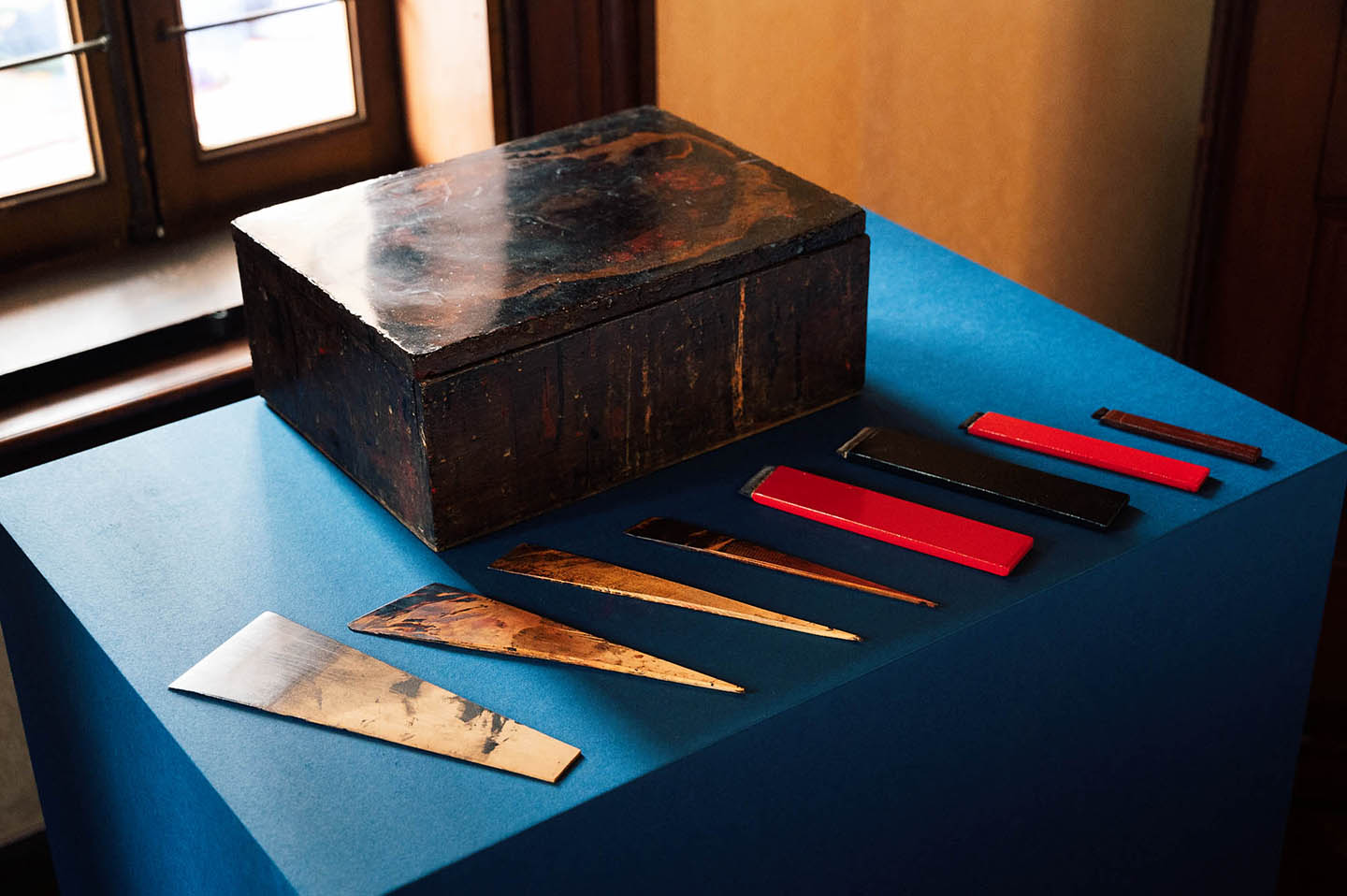 Lacquering
The process of applying and polishing lacquer is repeated about 20 times when crafting amikoshi. The tools used in lacquering include scrapers, brushes, and surface plates. 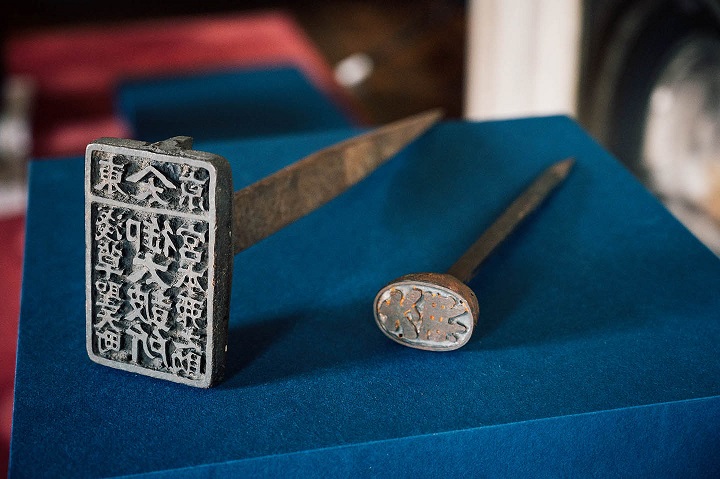 Branding stamp
Taikodrums were branded with a metal stamp. This may have been the origin of the Japanese phrase “taiko ban o osu,” which refers to a stamp of approval. At present, instead of a branding stamp, we use a plate bearing the company’s name and our logo, the Japanese characters Tai U (indicating the Unosuketaikostore). 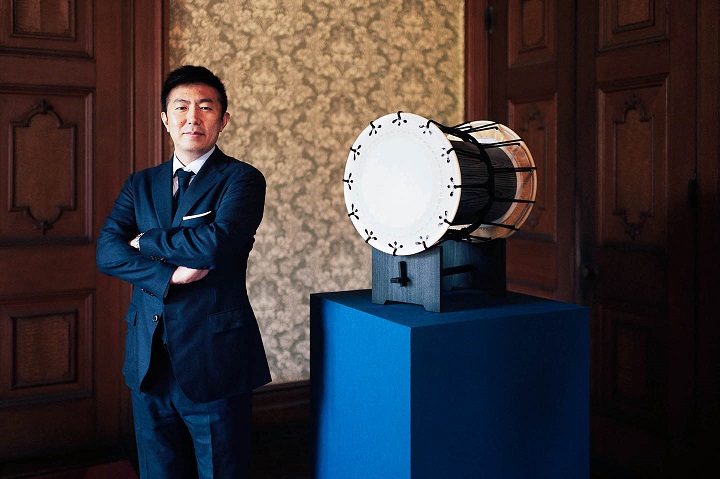 Wadaiko Miyamoto Unosuke Shoten
Founded as a taiko drum shop in the first year of the Bunkyu Period. Later expanded their business, centralized on the manufacturing and sale of taiko drums and portable shrines. After their founding, Miyamoto Unosuke Shoten made it their mission to preserve and develop festivals and traditional performing arts. As part of this mission, they have contributed to Japan’s globally respected and wonderful traditions, with the power of connecting people through festivals. 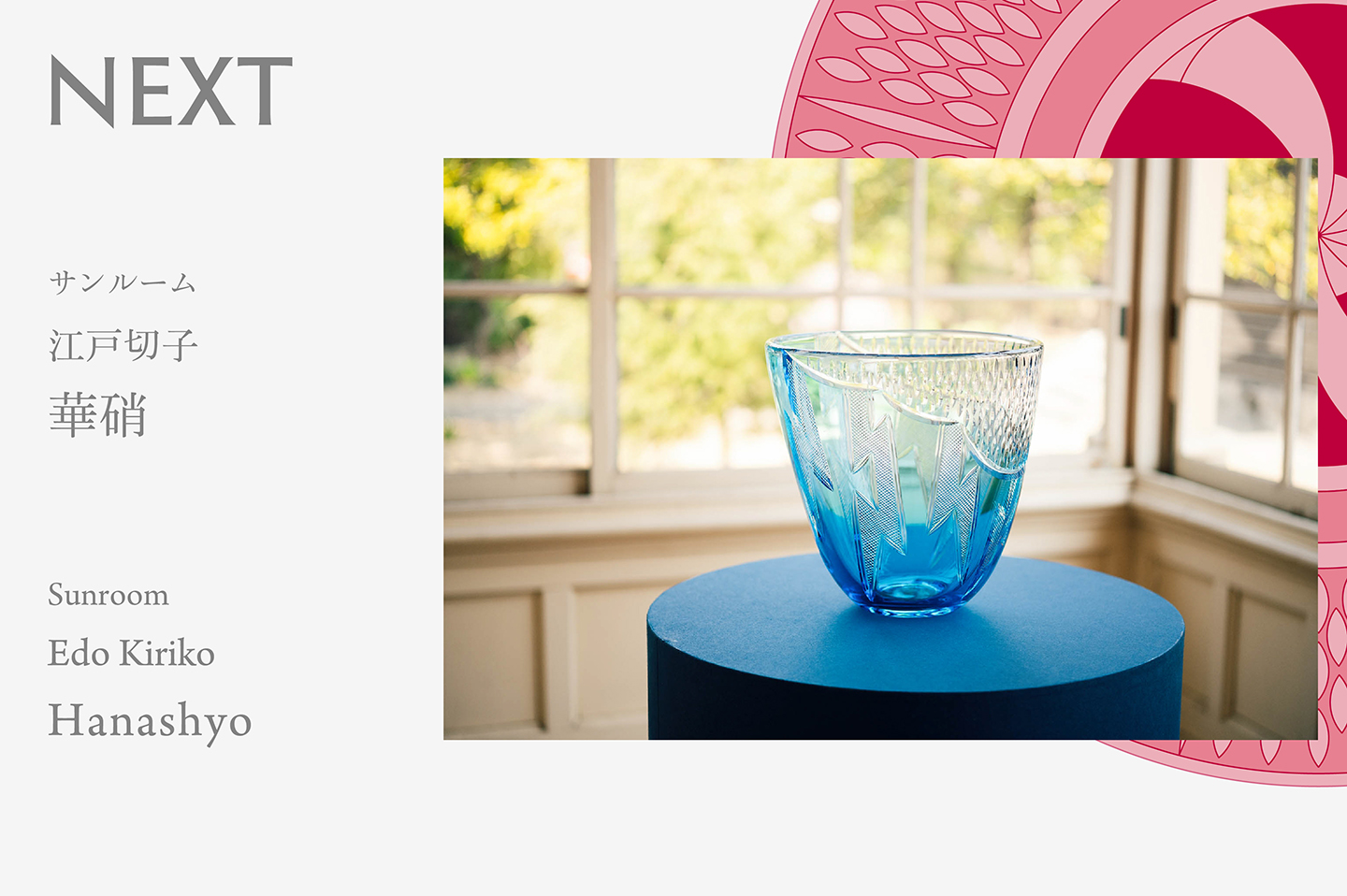