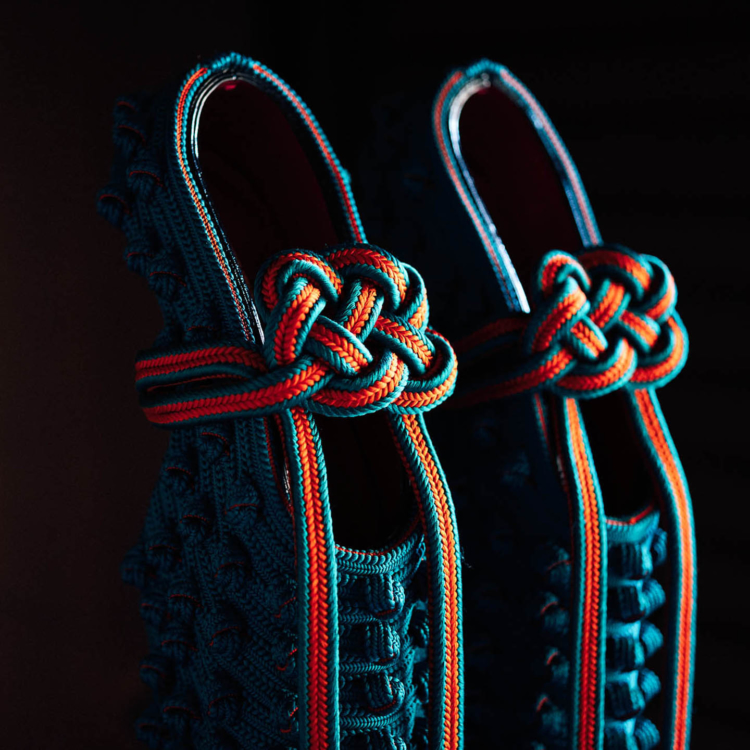 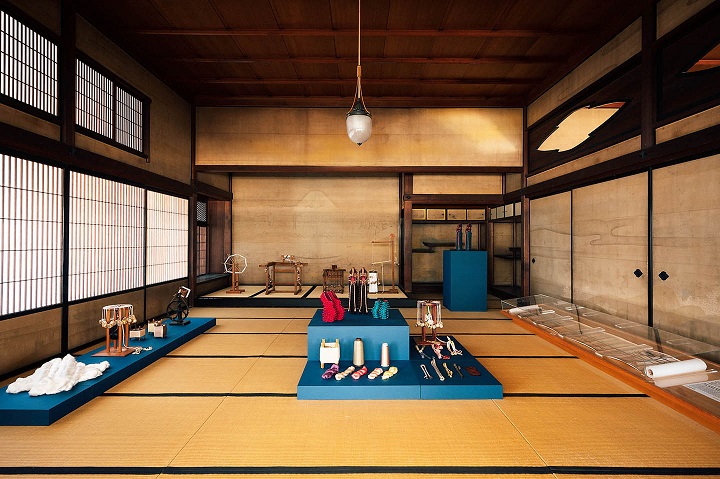 The dying, design, and braiding of silk yarn––.

Ryukobo is involved with each step of the kumihimo braiding process.
Kumihimo has a long history, said to have been used as part of the ceremonial dress of Prince Shotoku during the Asuka period (592-710). While kumihimo is said to have come to Japan together with Buddhism, it would later develop into something uniquely Japanese, including being used on armor. 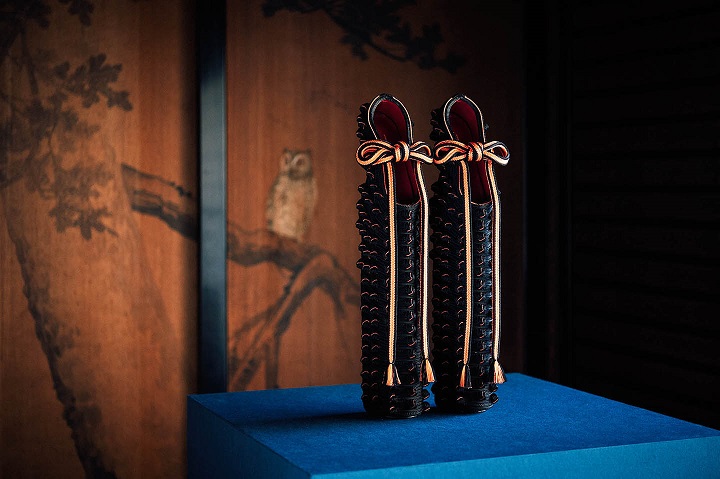 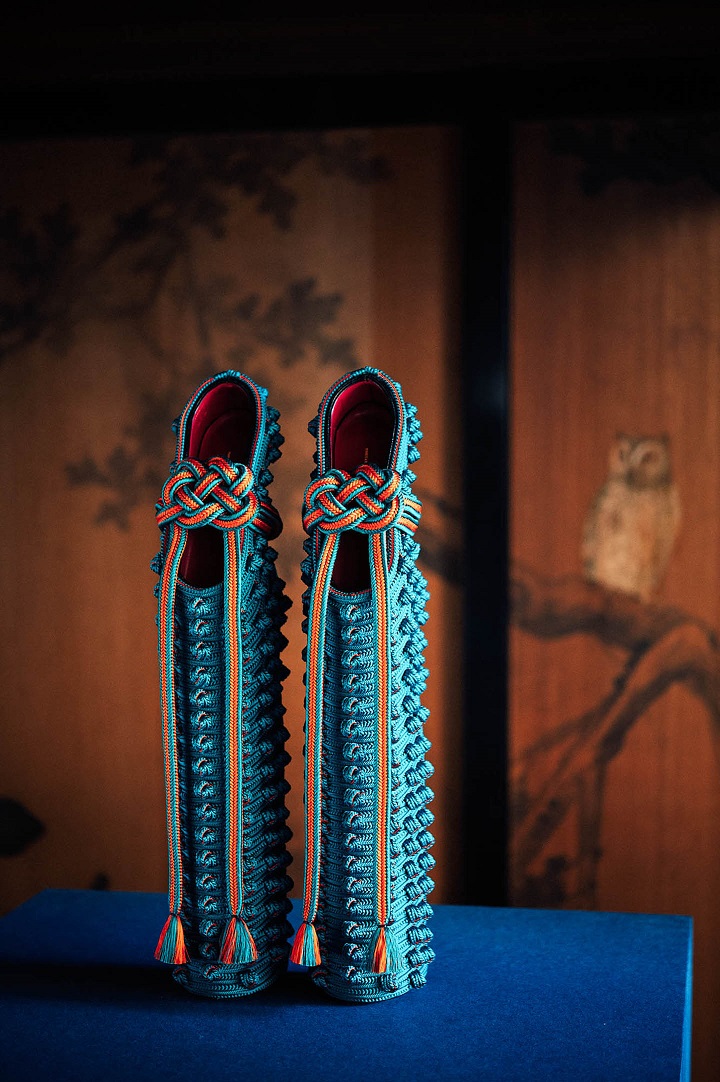 The Kaku-himo (square braid), born as a collaborative piece for this exhibition, has differing colors on the front and back. The inspiration for this design came from the lining of haori, worn over kimonos. By using pink silk yarn dyed with Isehan Honten’s beni pigment, the yarn demonstrates the artistic effect of an accent color. 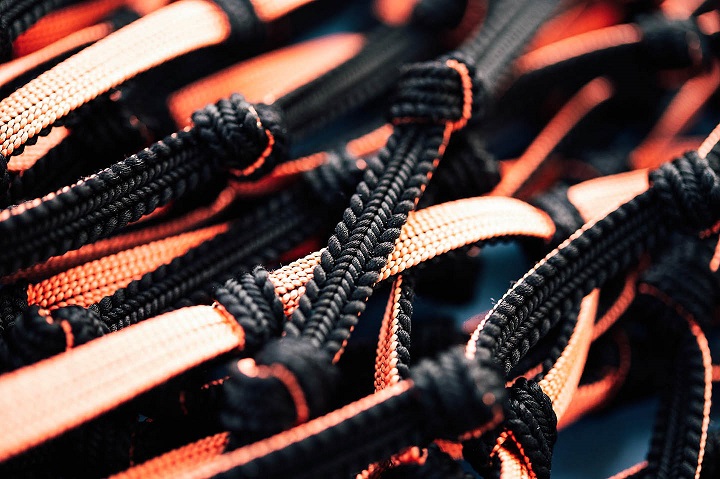 In addition, by carefully braiding the yarn in intervals of 60 millimeters, one can give the texture a unique expression. Harmony emerges within the ornamental knot tied in a Yurugi-gumi (crown braid) style. 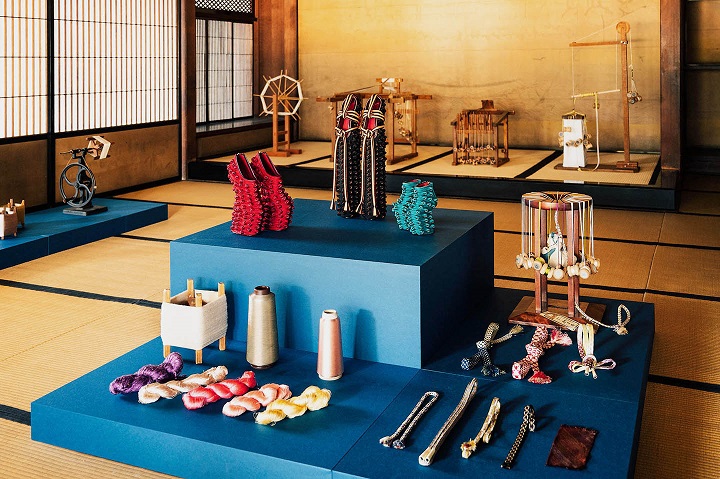 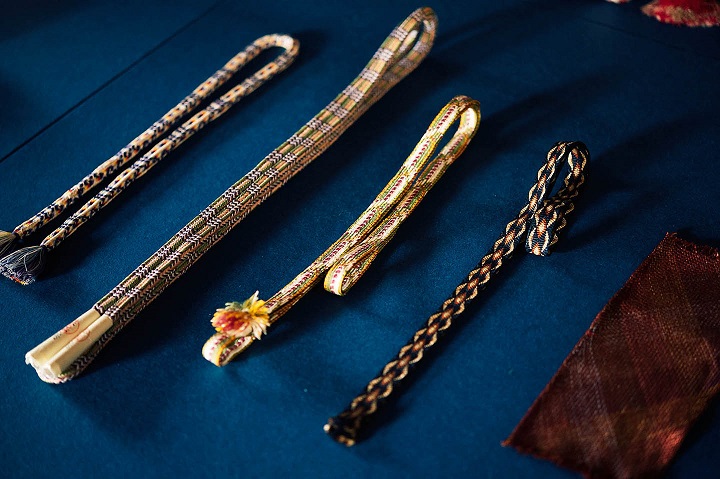 Re-creatingKumihimobraided belts
By researching the techniques used inKumihimobraided belts, the current director, Takashi Fukuda, has succeeded in re-creating historicalKumihimowhich have been preserved for centuries, including theChusonji Kumihimo, which was donated to the Golden Hall of Chusonji Temple; and the sutra scrollKumihimo, which was dedicated to the Itsukushima shrine by the Heike rulers. 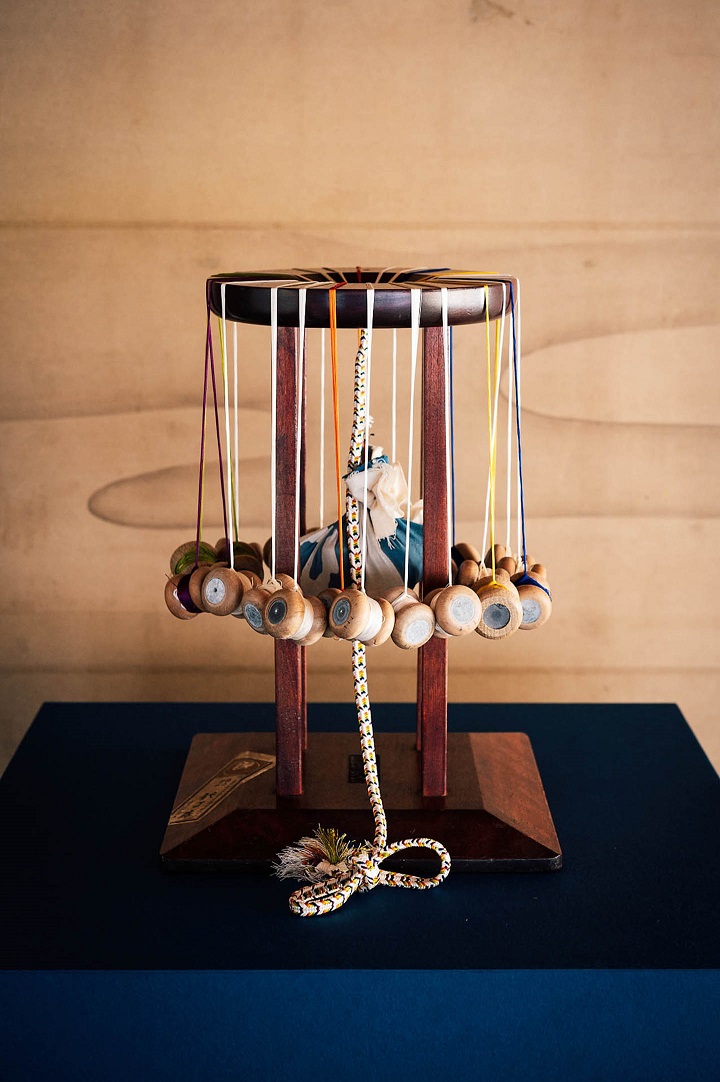 Maru-dai: Round braiding loom
This type ofKumihimobraiding loom is typical ofEdo Kumihimo. It can be used to createKumihimoof many different patterns and shapes, from round to flat. The round top is called a “mirror” because it expresses not only the shape of theKumihimo, but also the feelings of its weaver. 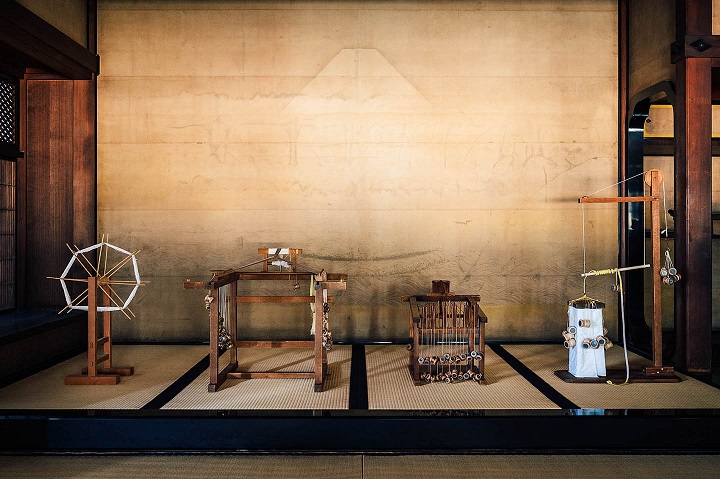 Taka-dai: Tall braiding loom
With this braiding loom, patterns are produced by switching the braiding bobbins to and from the top, bottom, left, and right, making it possible to re-create a wide variety of patterning. Ryukobo adjusts the amount of thread tightening to produce a uniquely gentle, airy texture. . 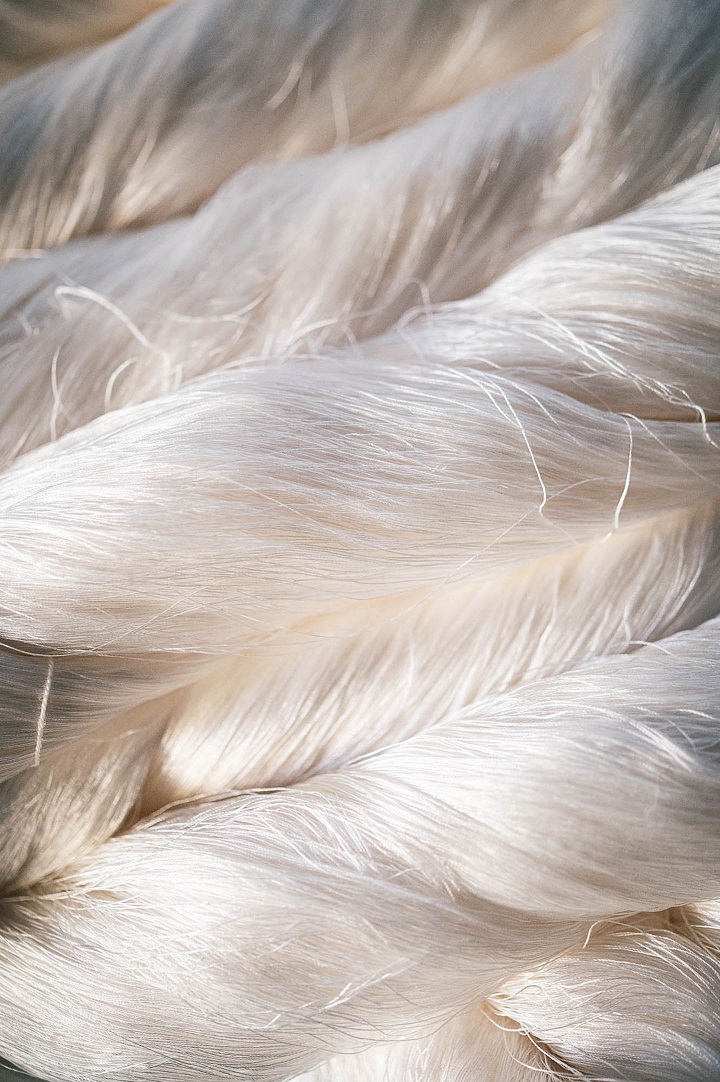 Fiber produced in Japan
Silk thread is the main material used inKumihimo. Japanese raw silk thread, which is considered a purely domestic fiber, has become quite rare, with a market share of less than 0.38% in the silk industry. 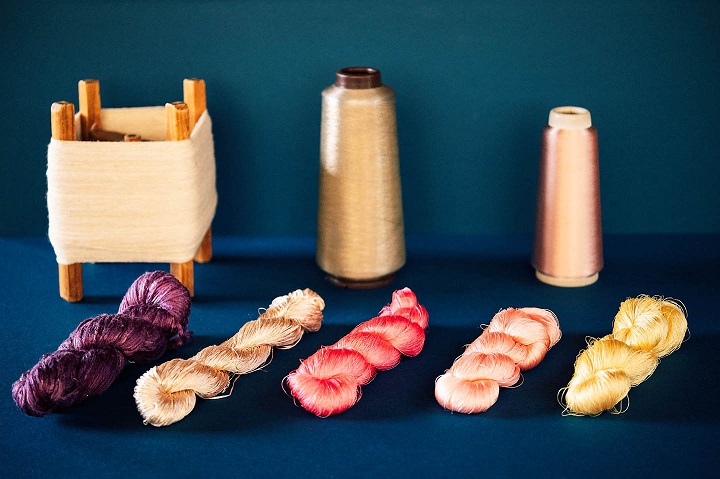 Braiding with distinctive materials
Ryuta Fukuda, the future director, is researching innovative techniques for the use of different types of fibers, including distinctive materials such as stainless steel and leather, as well as bamboo, paper, and other natural fibers which can play a role in achieving the SDGs. 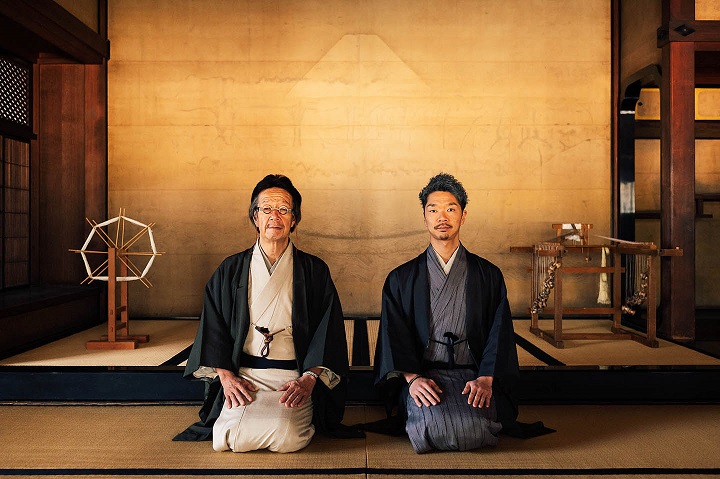 Tokyo Kumihimo Ryukobo
Ryukobo was established in 1889 (Meiji 22) in Odawara, Kanagawa Prefecture, as a family business. In 1963, Mannosuke Fukuda founded Ryukobo in Nihombashi. Ryukobo carries out the entire process of dyeing silk thread, designing patterns, and braiding silk cords, enabling them to produce various types of obi sashes. For more than 130 years, Ryukobo has been passing on the culture and technology of kumihimo simultaneously working on the reproduction of traditional braids as well as enthusiastically developing new products to meet modern needs. 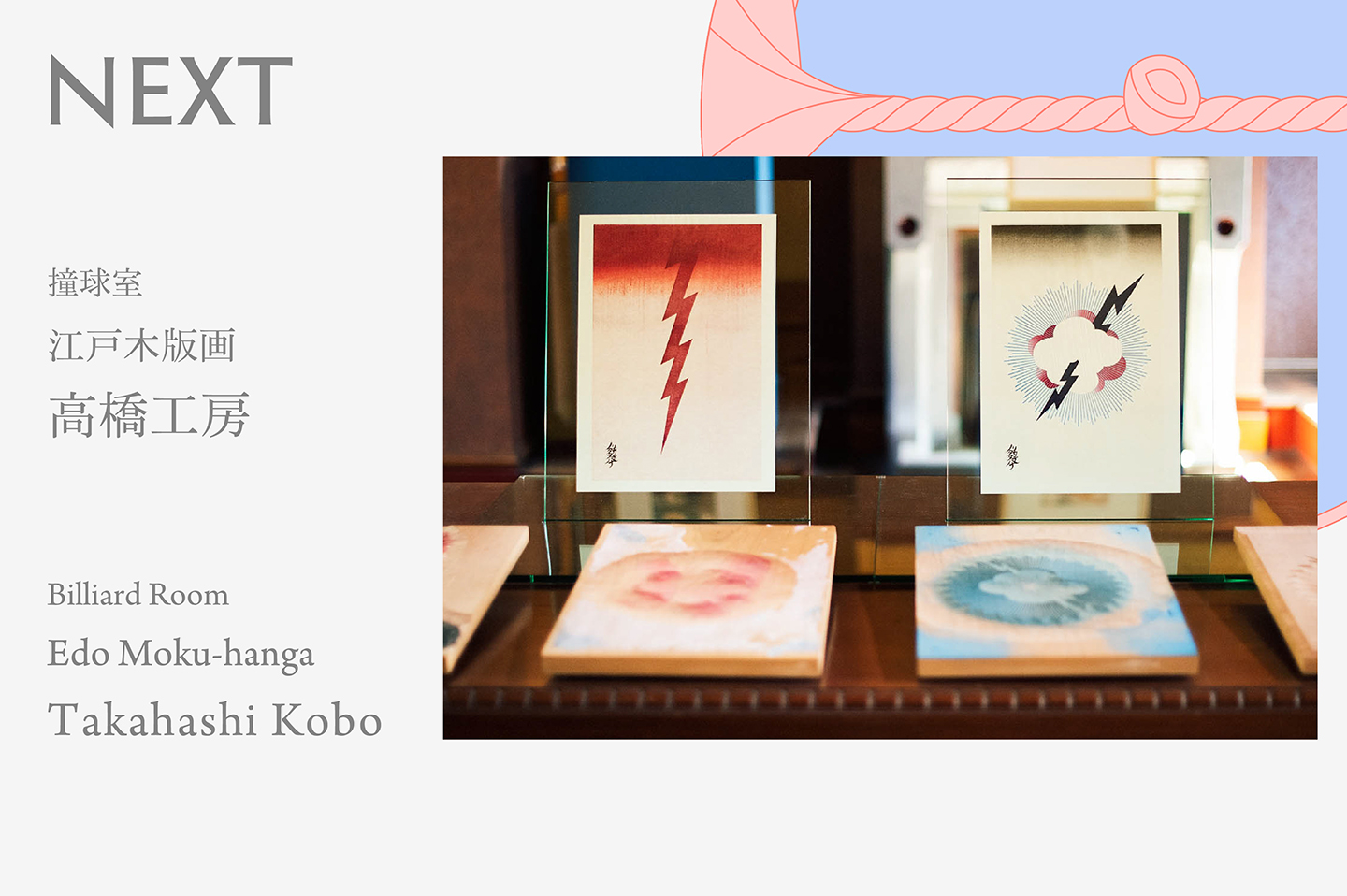