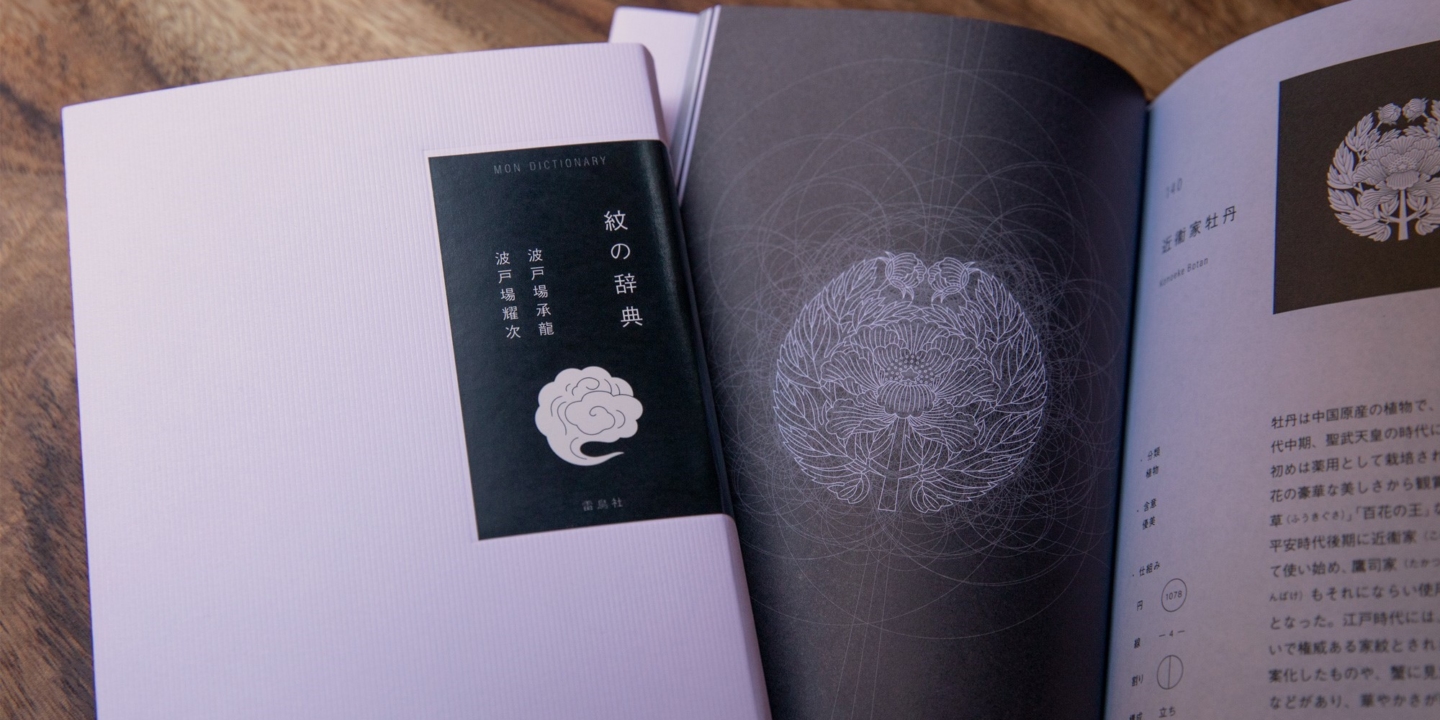 The intricacies of “Family Crest” designs, depicted in a single book.

The book “The Crest Dictionary”, published in December by Raichosha, has a number of family crests familiar to the Japanese people, such as ivy, hollyhock, the swallowtail butterfly, and clouds. What makes this book stand out is that the family crests have an awe-inspiring beauty that makes you feel as if you are touching the mysteries of the universe. All the family crests in this book are designed using a unique technique called “Mon-Mandala®” (“mon” meaning “crest”). Every line used in the drawing process has been left as it is, showing how family crests are aesthetic designs created through the combination of circles and straight lines.

The authors of the book are Hatoba Shoryu, the 3rd generation owner of “Kyogen Inc.”, and his son, Yohji. Shoryu, “the Japanese family crest artisan” who has inherited the Edo tradition of drawing family crests on Kimono by hand, has been working together with Yohji, and started using digital technology for the crests’ designs in the pursuit of further innovating their creative expressions.
“With digital tools replacing bamboo compasses and rulers, the circles and lines used during the process, which do not appear when they are hand-drawn, are left as they are, and resemble a beautiful Mandala”, says Shoryu.

In addition to its use in their products, they expanded the use of this “Mon-Mandala” as an artistic work. This time, and for the first time, they compiled their family-crest collection as a book and drew all of the crests using the Mon-Mandala technique. Interestingly, the crests are ordered by the total number of circles and lines used, not by the names of their motifs. As you flip through the pages, the design becomes increasingly complex, making you feel as if you’re trying to decipher some kind of secret code.

“Although it is complicated, I have never thought of it as tedious. Drawing crests is so fun and I can’t get enough of it. As the great Hokusai said, ‘All things are created from lines and circles’. I believe that perfect designs are created by combining perfect circles and straight lines”, Shoryu explains.

This book also talks about the large shop curtain of COREDO Muromachi in Nihonbashi, Tokyo in its “Modern Crests” section. The “Pentagon Box Lattice” is depicted by latticed boxes shaped in a pentagon, based on the fact that Nihonbashi was the starting point of the five main avenues of transportation and trade in the Edo period. The outer boxes are shaped like the Japanese character “入” (“enter”) while the inner boxes are shaped like “人” (“people”), arranged into a pentagon to symbolize their wish of “more and more people entering, creating long-lasting prosperity”, a reference to Edo’s refined and witty culture.
“I am always thinking about encapsulating deep meanings in simple designs”, says Shoryu.
It is truly the purest form of Japanese design that aims to express the true essence of things. The authors are planning to write a book to explain how they draw the crests. Conveying the charms of crests to the next generation through books will lead to further expansion of the infinite world. 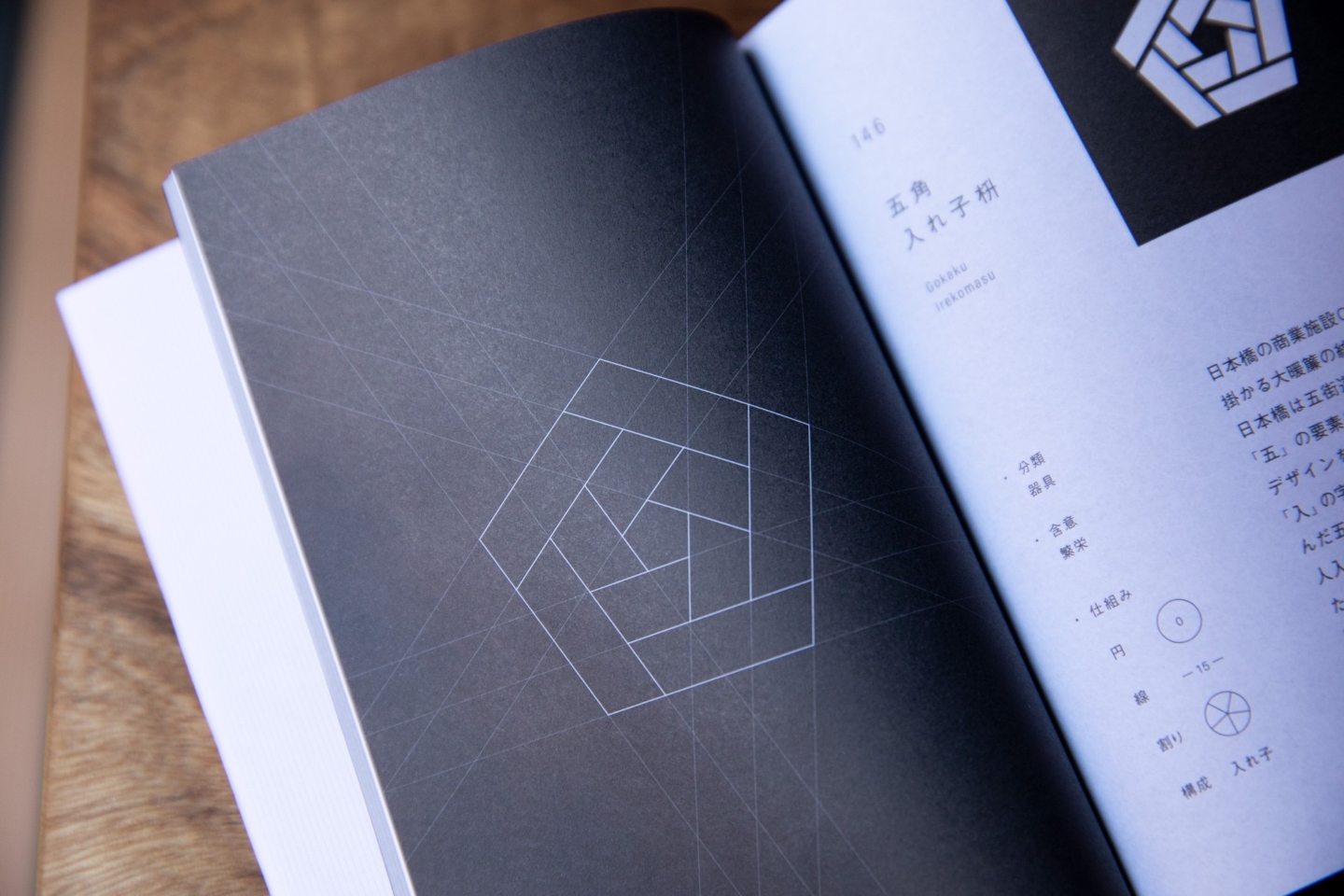 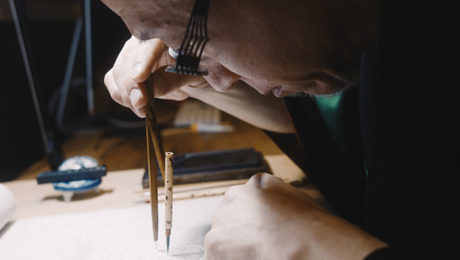