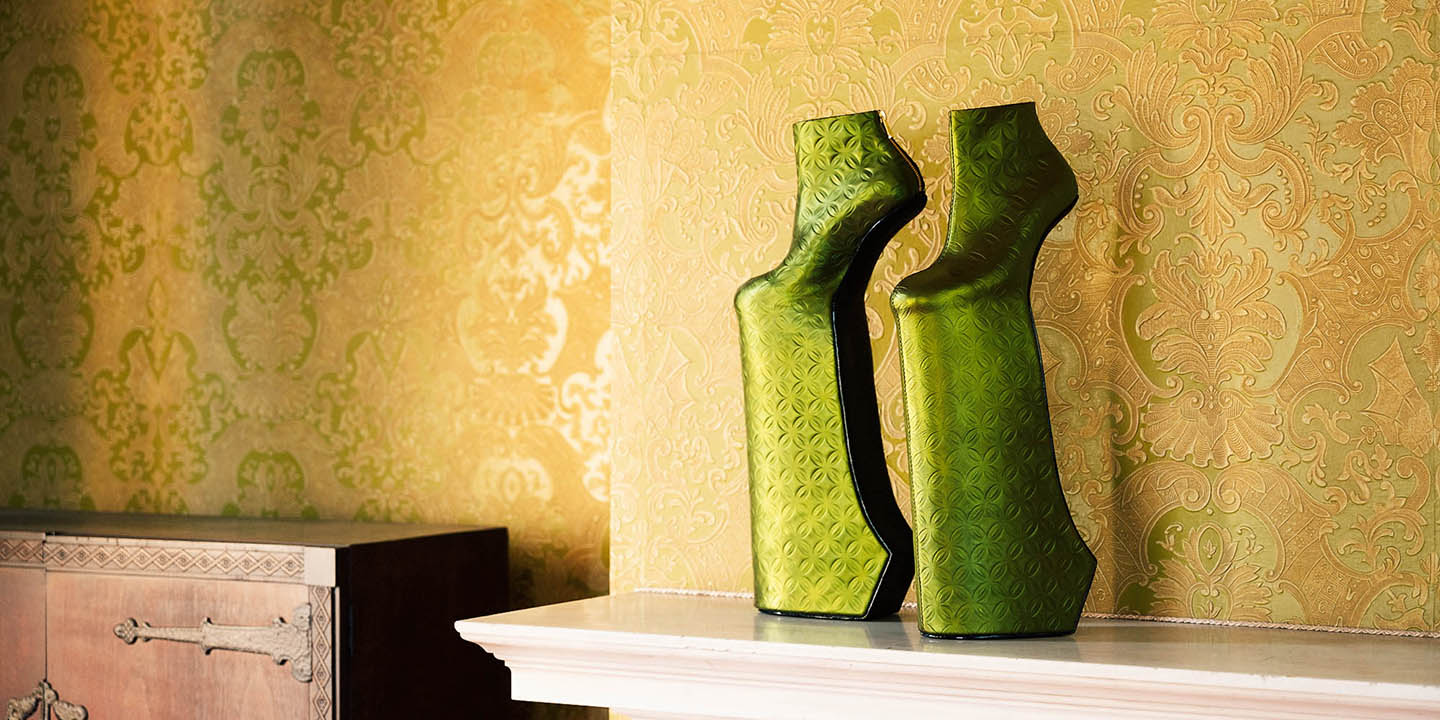 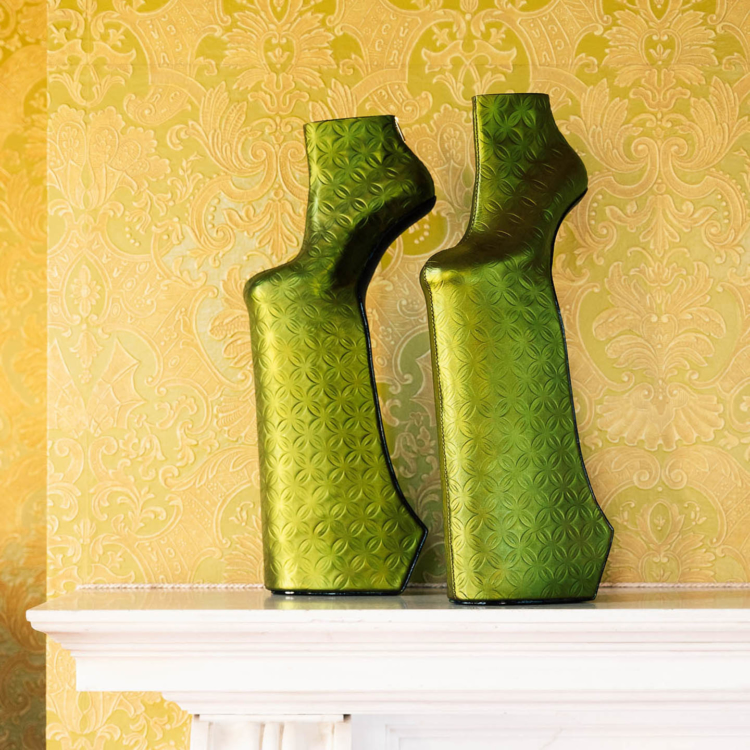 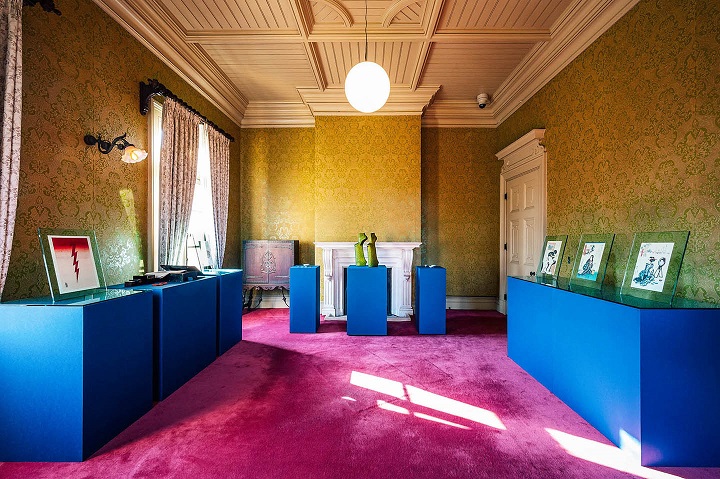 Isehan Honten, Japan’s last remaining traditional rouge-maker, has been making and selling “beni” rouge since the early 1800s, during the Edo era.

Its rouge is made from red pigment extracted from safflower petals. This pigment makes up only 1% of each petal, so it is exceedingly rare.

An iridescent gleam is the sign of high quality rouge, and in the latter part of the Edo era it became fashionable to layer rouge on the lips to produce a green effect in what was calledsasabeni, or “bamboo grass rouge.”

Isehan Honten constantly sought to create even more beautiful, iridescent rouge, refining its approach and developing a secret technique that it carries on even today. 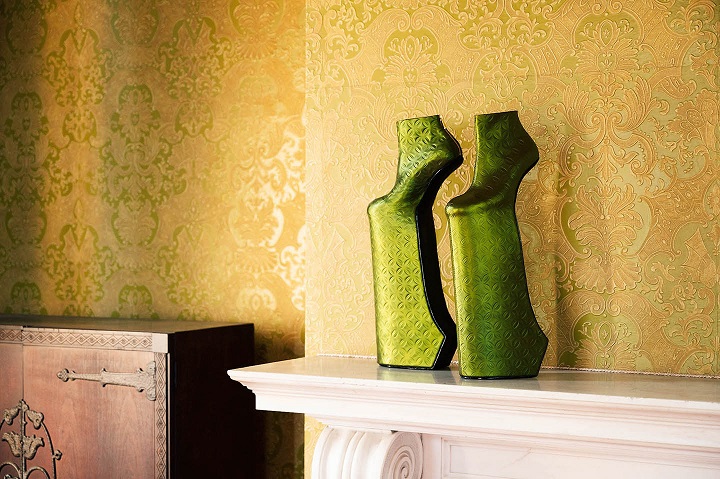 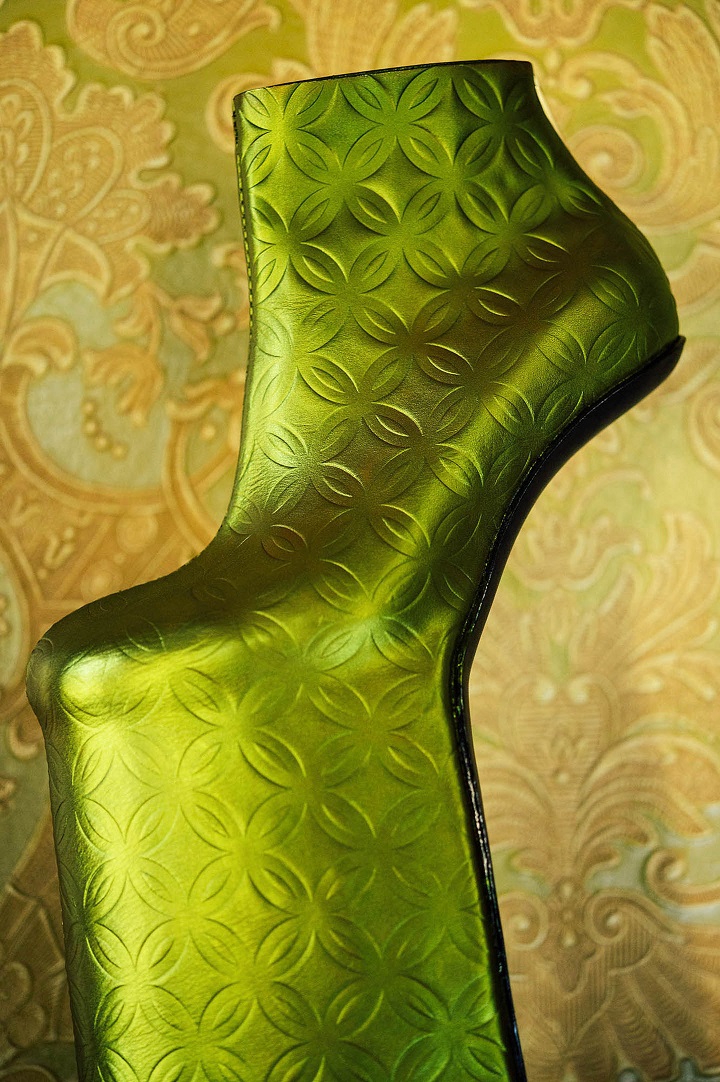 The rouge used in this collaborative work was red when used as a dye, but when the surface of the dyed leather dried, became an iridescent green.

These “heel-less shoes” are the product of painstaking trial and error, trying different leather colors and rouge dye concentration to produce their iridescent green finish. 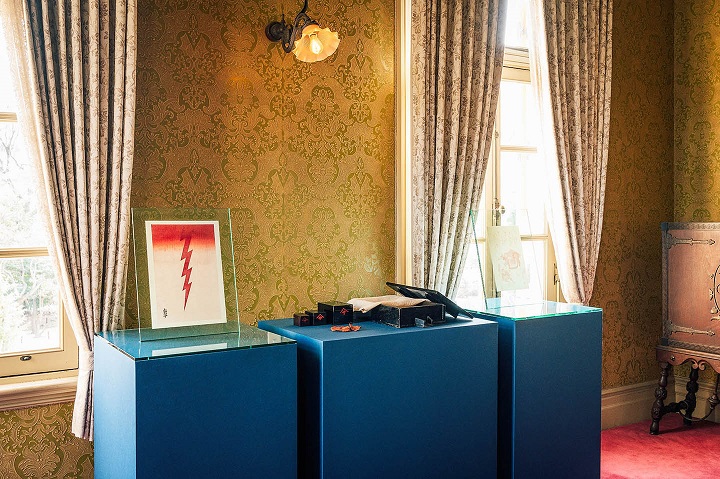 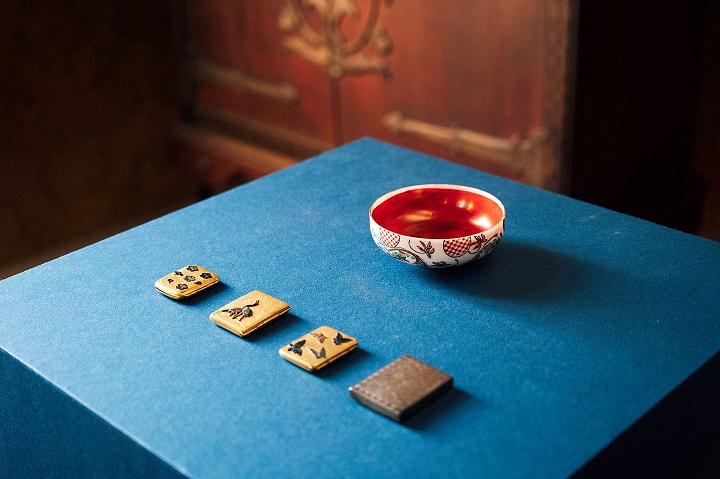 Beni Cup
A vessel used for beni. The rich scarlet “beni” pigment comes from the safflower petals. After being extracted and turned into a cosmetic, the beni was sold by being painted onto a cup, plate, or bowl. 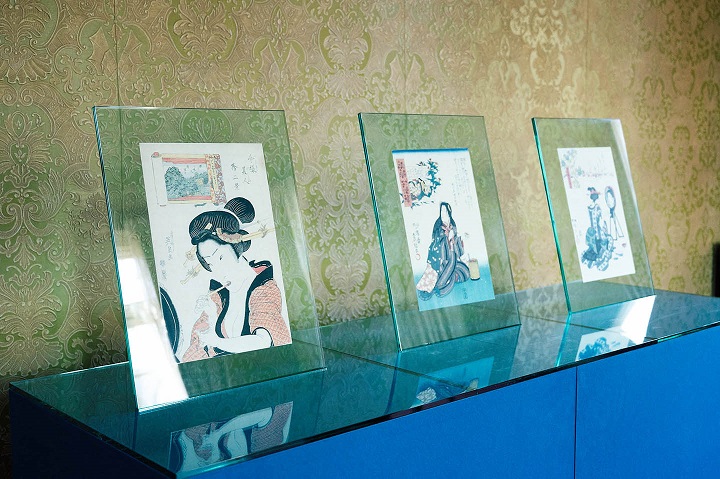 Nishiki-e (colored woodblock print)
During the Bunka Bunsei Era (1804-1830), the make-up method of “sasa beni” became popular. This involved layering one’s lower lip with high-quality beni which shone green when applied. Due to the difficulty of copying this method for common people, they would lay down a substrate of ink and layer a small amount of beni on top, which would allow them to create a greenish dark red. 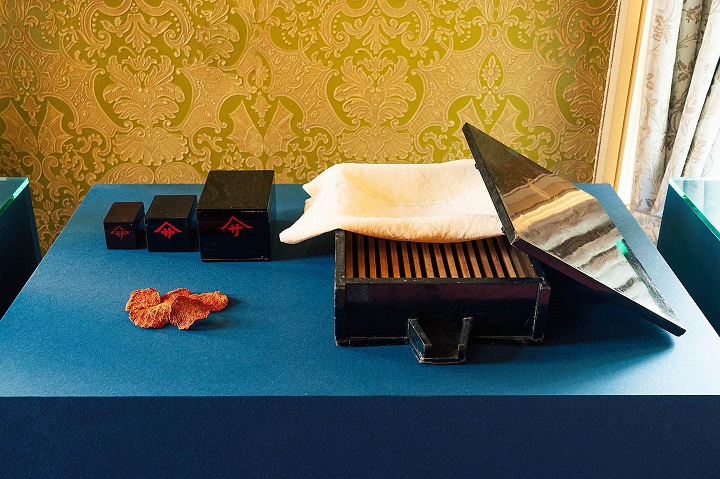 Raw Material (Beni Mochi)
Along with intensifying its red pigment by fermenting the safflower petals, the material is preserved for long-term use by being dried into the form of thin rice crackers. 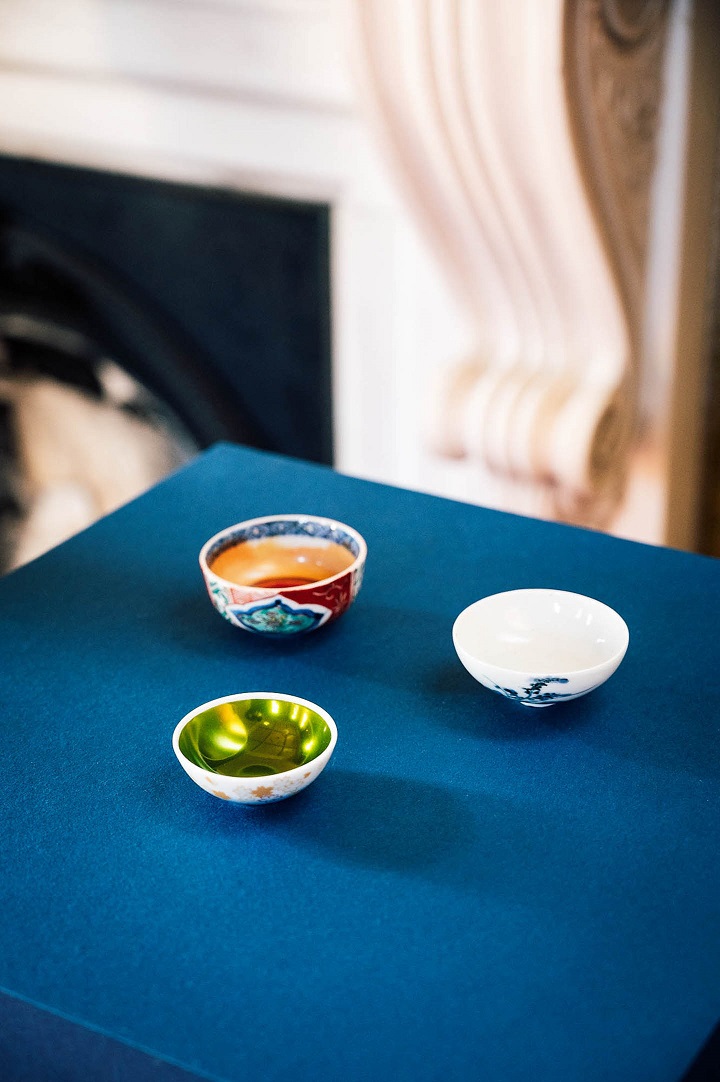 Komachi-Beni
By brushing the iridescent surface with a brush dipped in water, the surface turns to a scarlet color. The now-scarlet beni has many different applications, including lipstick, cheek rouge, and eyeshadow. This unique beni is created through secret techniques that have been passed down successive generations. 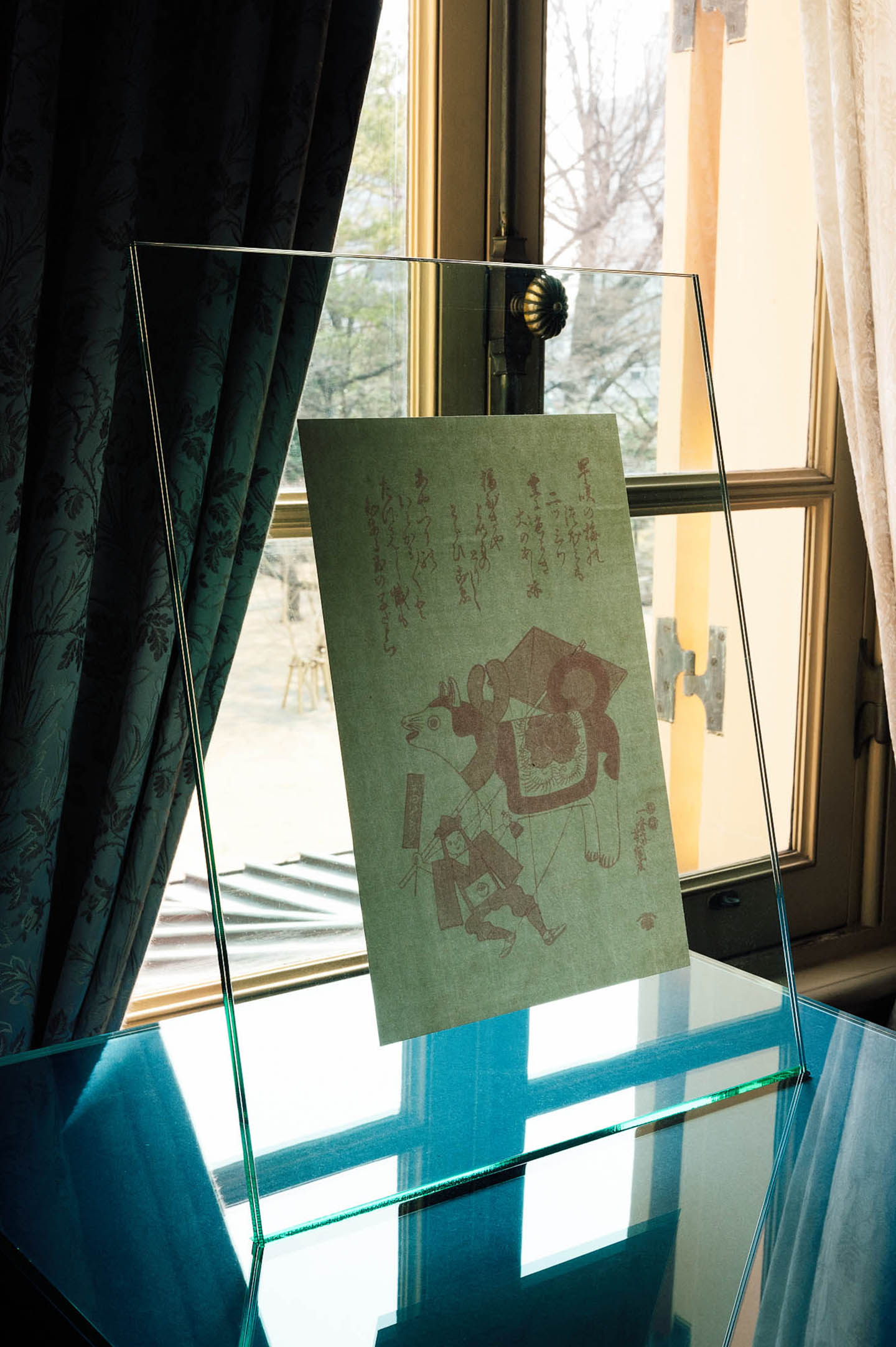 Hoso-e
Hoso-e are a form of charm that wards against disease. The charm would be pasted on the inside of the disease-victim’s bedside screen. After their recovery, it would then be burned as part of an exorcism ritual. During the Tenmei era (1781-1789), hoso-e were considered a classic get well soon gift, and were sold at picture book and wood print shops. 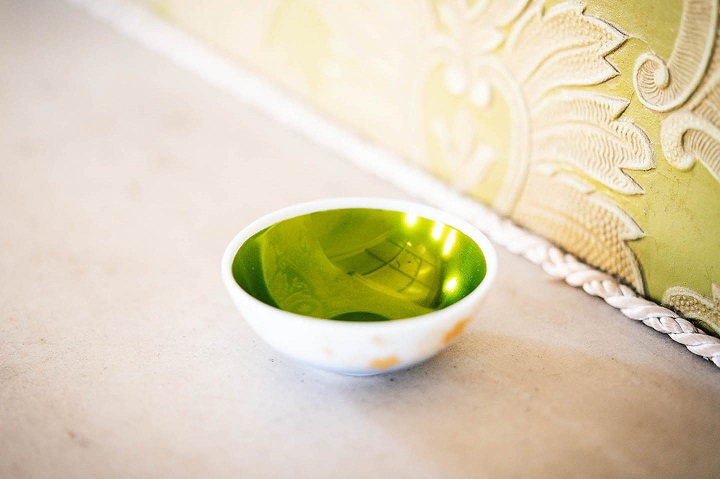 Komachi-beni Isehan Honten
In 1825 (late Edo Period), Isehan Honten was established as a manufacturer and vendor of beni, in what is now Nihombashi, Kobuna-cho. The founder, Hanemon Sawada, after countless trial and error, succeeded in coming up with a particular method for making beni of beautiful, iridescent color. In those days, beni made in Kyoto was considered mainstream, but Sawada’s beni became popular quickly. It is now the only beni store that remains and continues to protect its trade secret for 200 years. 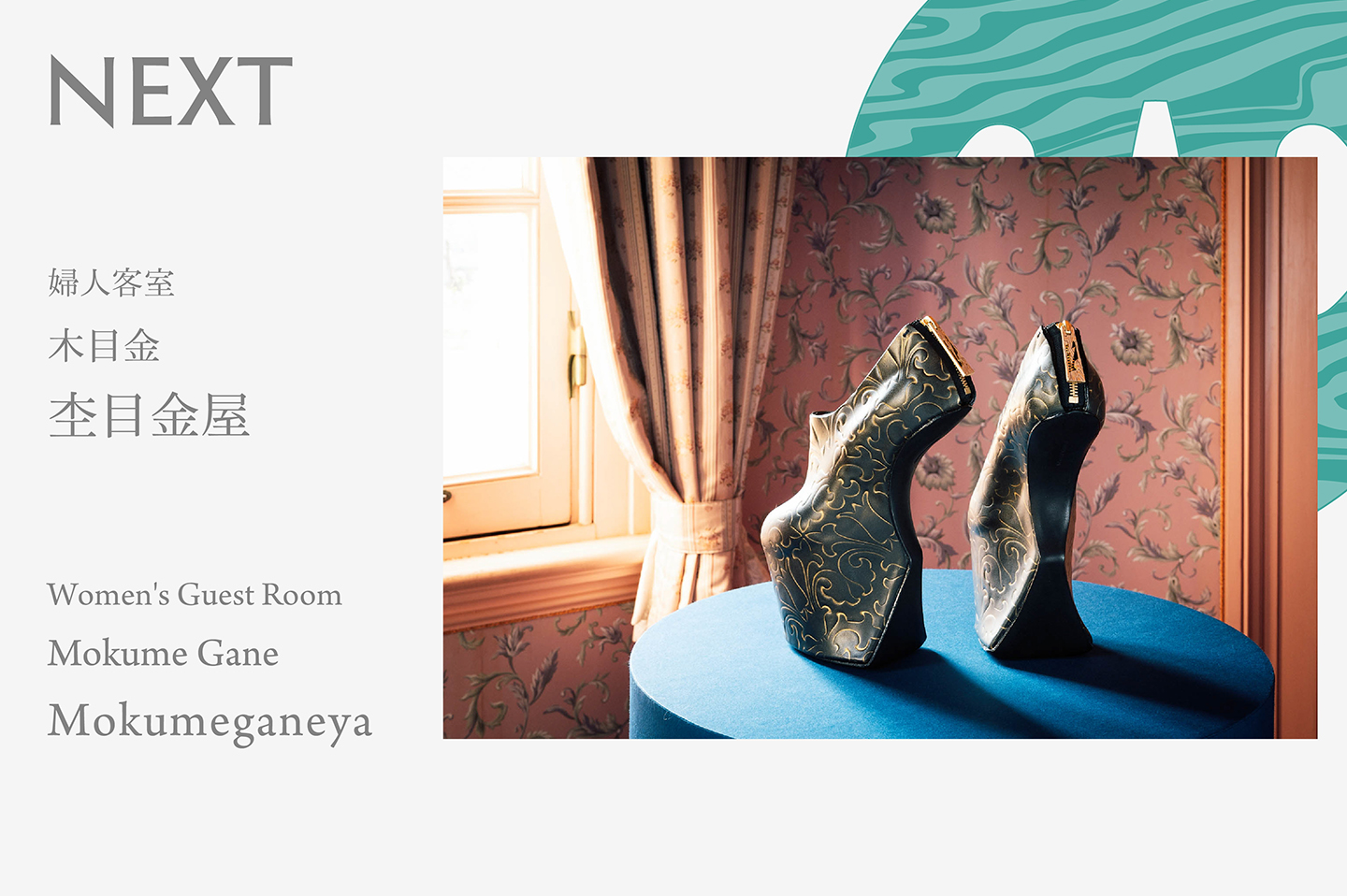